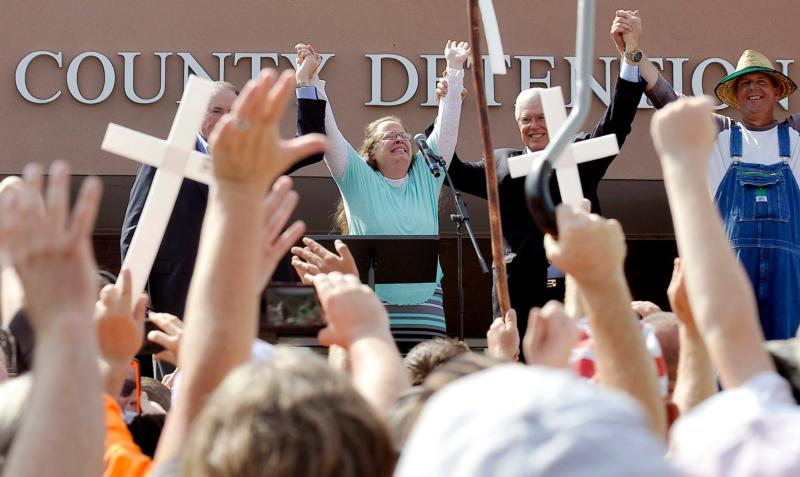 VATICAN CITY (CNS) — Pope Francis’ meeting with Kim Davis, the county clerk from Kentucky who was jailed for refusing to issue marriage licenses, does not equate support for her “position,” the Vatican spokesman said after discussing the issue personally with the pope.

Jesuit Father Federico Lombardi, the spokesman, issued a statement Oct. 2 saying the pope had met with “several dozen persons who had been invited by the nunciature to greet him” in Washington and that “such brief greetings occur on all papal visits and are due to the pope’s characteristic kindness and availability.”

Father Lombardi made a distinction between the brief greetings and more official meetings by saying, “The only real audience granted by the pope at the nunciature was with one of his former students and his family.”

When the pope met with Davis, Father Lombardi said, “the pope did not enter into the details of the situation of Mrs. Davis and his meeting with her should not be considered a form of support of her position in all of its particular and complex aspects.”

Davis, the elected clerk of Rowan County, initially refused to grant marriage licenses to gay couples and then stopped issuing them to gay or straight couples, claiming that doing so would violate her Christian religious values after the U.S. Supreme Court ruled same-sex couples have a right to marry.

Davis told ABC News she met the pope Sept. 24 at the Vatican embassy in Washington. “I put my hand out and he reached and he grabbed it, and I hugged him and he hugged me,” Davis told ABC News. “And he said, ‘Thank you for your courage.'”

Father Lombardi initially issued a statement saying he did “not deny the meeting took place, but I have no comments to add.”

However, since the private meeting between the pope and Davis “has continued to provoke comments and discussion,” Father Lombardi wrote Oct. 2, he provided a clarification “in order to contribute to an objective understanding of what transpired.”

Basilian Father Thomas Rosica, who assists Father Lombardi with the English-speaking press, told reporters later that depending on what people say after meeting the pope, it is clear “it could be distorted or manipulated; it could be exaggerated.”

He added, “I would find it hard to believe” that Davis and her husband had 15 minutes with the pope; it was more likely that the pope greeted a group of people, including the Davis’, and that all those greetings took 15 minutes or less.

Father Rosica said his personal opinion was that the meeting with Davis had a negative impact on Pope Francis’ visit to the United States, which otherwise was “extraordinary.”

“To allow this to overshadow it would be very unfortunate,” he said. “This was one very small, small part of a much greater visit.”

Davis had told ABC News that a “church official” phoned and invited her to meet the pope; later reports attributed the invitation to Archbishop Carlo Maria Vigano, the Vatican nuncio in the United States, who hosted the pope during his stay in Washington.

Although Davis’ name was not used, Pope Francis was asked about her case during his news conference Sept. 27 on the flight back to Rome.

“If a person is not allowed to exercise conscientious objection, he is denied a right,” the pope told reporters.

As a follow-up, the reporter asked if that should apply to a government official, and the pope replied, “It is a human right. If the government functionary is a human person, he has that right.”

During his stay in the United States Sept. 22-27, Pope Francis had other private meetings in the nunciature in Washington, the U.N. nunciature in New York and at the seminary in Philadelphia where he stayed. The Vatican announced several of those meetings, including the meetings in Philadelphia with survivors of sexual abuse and with a family of five that drove from Argentina to the World Meeting of Families in a 1980 Volkswagen bus.

Lawyer Mat Staver, who represents Davis, told Catholic News Service in a phone interview Sept. 30 that he could not discuss details of how the meeting came about.

He said Davis was accompanied by her husband, Joe.

“I think the meeting is more important than how it came about,” Staver told CNS from the Orlando, Florida, office of the firm he founded, Liberty Counsel.

“I think the meeting was incredibly important, especially for Kim Davis, who never thought she’d do that in her life — meet the pope,” Staver said. Davis is an evangelical “who came to Jesus about four-and-a-half years ago, and it transformed her life,” he added.

Her parents are lifelong Catholics and she gave them the two rosaries the pope gave her — in cases with the Vatican seal. Staver said her father remarked he could live to be 200 years old and the rosary would be the most important gift he would ever receive.

Davis told Staver the pope was “kind and gentle and very caring,” he said, and that when they met they clasped hands, and asked one another for prayers.

“He thanked her for her courage. He specifically said, ‘Stay strong,'” according to Staver. “They embraced.”

“I can’t say what pope knew or didn’t know” about the Davis case, said Staver.

Contributing to the story was Julie Asher in Washington and Carol Glatz at the Vatican.

NEXT: Hunger is a ‘scandal,’ a ‘sin’ in a world of plenty, pope says