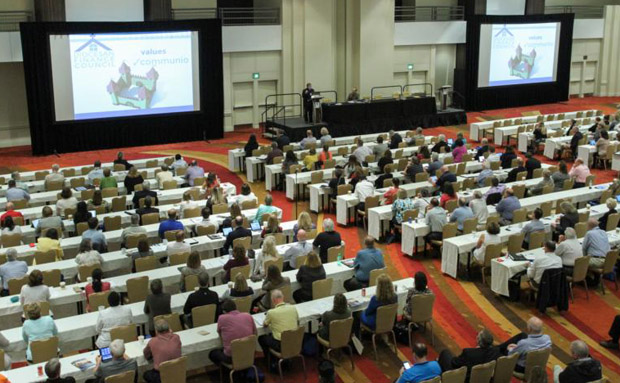 People attend the annual meeting of the Diocesan Fiscal Management Conference in Atlanta Sept. 29. More than 325 fiscal professionals representing dioceses in the United States, Canada and other countries participated in the Sept. 27-30 conference, which had transparency, compassion and vision as themes for its numerous workshops. (CNS photo/Michael Alexander, Georgia Bulletin)

ATLANTA (CNS) — The Catholic Church’s assets are intended for the advancement of its mission and never for the mere increase of wealth, Atlanta’s archbishop told attendees at the annual meeting of the Diocesan Fiscal Management Conference.

“The wasteful forfeiture or the tragic mismanagement of the church’s resources are not to be judged merely by the standards recognized by the financial community but by the even more heartbreaking loss of the church’s capacity to care for all those entrusted to our guardianship,” Atlanta Archbishop Wilton D. Gregory said in his Sept. 27 keynote address, “Leading the Church With Mercy and Compassion.”

He spoke of the legend of St. Lawrence the Deacon, who, when ordered to bring the treasures of the church to the prefect of Rome, gathered all the poor of the city together and presented them.

“The lesson that Lawrence then offered to the Roman prefect, he now offers to all of us, especially to those of you who daily handle the church’s fiscal resources,” said Archbishop Gregory.

“Lawrence reminds us that the real treasures that the church continues to possess indeed are those who are the underprivileged, the marginalized, the neglected, the poor and the ostracized of our world.”

More than 325 fiscal professionals representing dioceses in the United States, Canada and across the globe participated in the Sept. 27-30 meeting, held in Atlanta for the second time since 1989. The 2016 meeting will be in San Diego Sept. 18-21.

Bishop Kevin J. Farrell of Dallas, episcopal moderator of the Diocesan Fiscal Management Conference, was celebrant for the opening Mass at the Basilica of the Sacred Heart of Jesus in Atlanta.

One of Pope Francis’ challenges has been to reform the financial agencies of the Catholic Church, continuing a process started by Pope Benedict XVI.

“Rome itself must be a leader in urging all of us to give an honest accounting of the gifts and the resources that we receive and administer. An indispensable component of that restructuring is called transparency,” Archbishop Gregory said.

Transparency may include reporting the financial state of dioceses or parishes, providing highly detailed audit reports, or giving a broad review of the big picture.

“Both styles of transparency are needed to ensure that our people have clear access to the truth,” he noted.

Father Gerald Goodrum of the Archdiocese of Galveston-Houston and Father Mark Hamlet of the Diocese of Austin presented “The Immigrant Parish: Toward Fiscal Self-Sustainment.”

“You ever heard that?” he asked. “We haven’t found that in our experience.”

Ordained five years ago, Father Hamlet previously had a 30-year career in international business and speaks Spanish. He was named pastor of Sacred Heart Church in Austin in July 2012. The Hispanic parish had closed its school and was in debt, and its sacramental record-keeping was in shambles.

“It was a shabby place. The parish saw itself as poor. It was told it was poor,” he said. “Hope was not a big thing in our community.”

Father Hamlet began creating an atmosphere of personal stewardship. He initiated a family night once a week for adult formation, Scouting groups for children, pro-life festivals and more opportunities for reconciliation.

He also removed barriers that kept some from accessing a Catholic education: Those who cannot afford tuition bring in a letter of acceptance, and a means is worked out for the children to attend school.

“It’s not about the money. You build trust,” said Father Hamlet.

Part of the trust is transparency and publishing how collections are spent.

It may be rare that a parishioner wants to see the entire financial picture, he said, but if so, give them everything.

Religious education should be continual, not tied to sacramental events, he said. A four-week program, “You Can Count on Me,” teaches what it means to be a parishioner.

“The Mass is the key to the family celebration,” emphasized Father Hamlet.

As after any family meal, the priest, not the lector, should make the parish announcements so he can demonstrate awareness of community, he said.

A positive office staff is important as well, said the priest.

Between fiscal year 2011-12 and the most recent fiscal year, the parish revenue increased by 68 percent, and it now has no debt.

“Separately, we may be poor, but together we’re rich,” said Father Hamlet. “Give ’em hope. … Teach them like Francis does. … Love them.”

Using statistics from the Texas Data Center, Father Hamlet described the demographic shift in the state. Hispanics now number 10 million, nearly half of the population, not just from immigration but also because the birthrate in Hispanic families is twice the birthrate in Anglo families, he said.

“By 2020, the majority population in Texas will be Hispanic,” he said.

At the same time, Hispanics’ income levels are not likely to rise because there are no educational initiatives addressing those needs, said the priest.

Father Goodrum found the same dire situation when he arrived at his new assignment in 2013. The parish was $1.1 million in debt to the archdiocese, had never met a diocesan service-fund goal and only had $800 in savings.

“It’s about rolling up your sleeves and getting your hands dirty,” said Father Goodrum. “We made a transition within 22 months.”

Now the parish, which is 98 percent Hispanic, has no debt, has met fund goals and has plentiful savings.

The pastor’s first step was to meet with the archdiocesan CFO to see how they could collaborate. The loan interest rate was cut by 3.2 percent and fund obligations were forgiven if the parish promised to meet future goals.

A daunting task became something possible with the archdiocese’s help, said Father Goodrum.

He began looking at all expenditures asking, “Do we need this?” The pastor formed a team of licensed workers to complete jobs at the parish plant for free, saving $50,000 a year.

Another important facet is teaching children that collections or offerings are important. Increasing Mass attendance is vital, he said.

“People love beauty. We are in the transcendence business,” said Father Goodrum. “We spent quite a bit of money on our liturgy.”

“It’s hard work. Get everyone on board,” said Father Goodrum.

NEXT: If you love God, care for what he has made, says cardinal