In debate on ‘Faithful Citizenship,’ bishops push for more about poverty 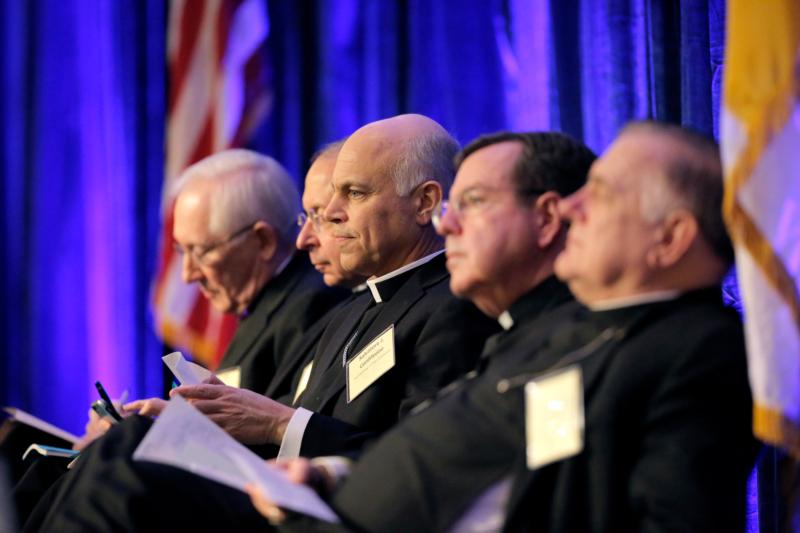 BALTIMORE (CNS) — The U.S. bishops adopted a revised version of their quadrennial statement on political responsibility, but not without questions being raised by some bishops who said it should better reflect Catholic social teaching.

The questions came from five bishops who said that the document does not adequately address poverty, as Pope Francis has asked the church to do.

Despite the concerns, the bishops moved to a vote on the document Nov. 17, the second day of the annual fall general assembly of the U.S. Conference of Catholic Bishops. They cast two votes, the first for the introductory note, which passed 217 to 16, with two abstentions. They approved the limited revision of the document 210 to 21, with five abstentions. Both needed 181 votes for passage.

The most vocal critic was Bishop Robert W. McElroy of San Diego, who said he was concerned that because poverty and the environment did not receive the same priority as abortion and euthanasia, that some people “outside of this room” would “misuse” the document and claim other issues did not carry the same moral weight.

“If I understand PF (Pope Francis) correctly, it is that the issue of poverty, particularly global poverty, with all its victimization of men and women and families across the world, the global poverty in relation to the earth which threatens all of humanity, this lies at the center of Catholic social teaching. They are priorities for us in every public policy position. And this is not reflected in this document,” he said.

Cardinal Daniel N. DiNardo of Galveston-Houston, USCCB vice president, who chaired the working group that revised the document, explained that the mandate given to the group of bishops was to keep the basic structure of the statement intact but to reflect the latter teachings of Pope Benedict XVI as well as Pope Francis.

That mandate, he said, came in June 2014, long before Pope Francis’ visit to the U.S. in September.

“Perhaps it’s not to your satisfaction and to the rhetorical flourish with which you bring them,” Cardinal DiNardo responded to Bishop McElroy. “But I think we have brought the magisterium of PF and later B16 into the document.”

The cardinal explained that any major reworking of the document would delay its publication and risk the appearance that the bishops were being partisan in their approach to guiding Catholics in their role.

“I think we have a useful document that I think recognizes the newness of Pope Francis and goes on with some continuity (of our earlier statements),” he said in response to a question earlier in the 45-minute discussion.

The revised document is longer than its predecessors of 2007 and 2011, which garnered much public attention during the two previous presidential election years.

The document reflects on long-held concerns related to abortion and the needs of poor people. It also references emerging issues related to court decisions on same-sex marriage, public policies that impact religious freedom and a rising concern for the environment as climate change affects more people around the world.

Notably, the document, “Forming Consciences for Faithful Citizenship,” draws on the words of Pope Benedict’s 2009 encyclical “Caritas in Veritate” (“Charity in Truth”) and Pope Francis’ “Evangelii Gaudium” (“The Joy of the Gospel”) and “Laudato Si’, on Care for Our Common Home.”

The bishops have issued a statement offering guidance to Catholic voters every four years for nearly four decades.

Cardinal Donald W. Wuerl of Washington told the bishops during the discussion period that the document was the result of consensus among the chairmen of several USCCB committees. He advised that the best course action would be to adopt it so that Catholics will have a guide to consider as they ponder their votes in the future.

“Granted it’s not going to satisfy everyone, but with the amendment brought into it and the charge to the working group involving all of the committees that service this conference, it’s a good document. I would not the perfect to become the enemy of the good,” the cardinal continued.”

Bishop Nicholas DiMarzio of Brooklyn, New York, who helped draft the original version of the document in 2007, urged his fellow bishops to support the document and then take steps to encourage them to turn out to vote in 2016.

“Let the people form their conscience and give them an understanding of prudence to make their decisions. We need to think about getting our people to vote,” he said.

“You will see the faithful Catholics just don’t vote. We need to invigorate them that they can make a difference. They can only make difference when the issues are clear,” he added.

PREVIOUS: Bishop disturbed by calls to end resettlement of Syrian refugees in U.S.