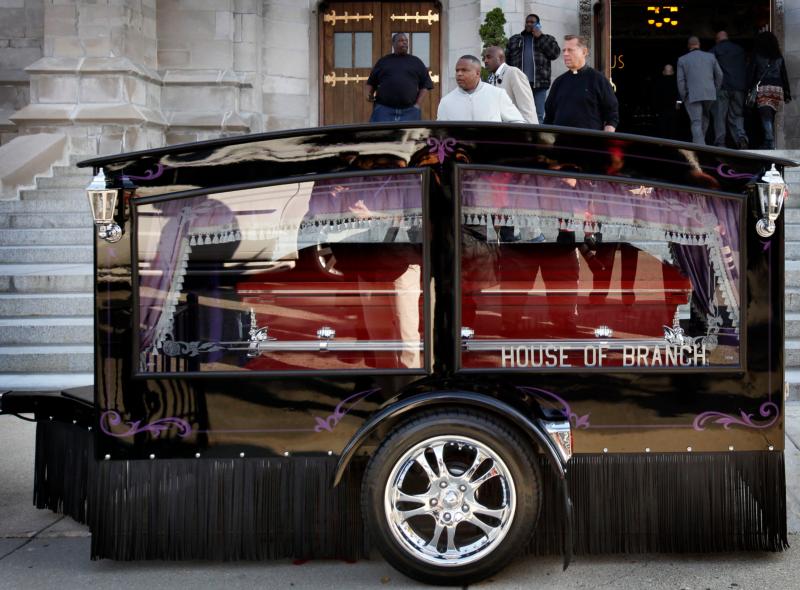 Father Michael Pfleger, pastor of St. Sabina Church in Chicago, right, greets Tyshawn Lee's small red casket as it arrives for his Nov. 10 funeral at the church. The 9-year-old boy was shot in the head Nov. 2 in a neighborhood alley as he was headed to his grandmother's house. Members of St. Sabina have raised nearly $54,000 in reward money for someone to come forward with the name of the shooter. (CNS photo/Karen Callaway, Catholic New World)

“This is the face of the reality of evil,” Father Pfleger said. “This is evil right in our face.”

The funeral service was held at St. Sabina Church, about a mile from where Tyshawn was lured into an alley and shot in the head and the back the afternoon of Nov. 2.

Father Pfleger, pastor of St. Sabina, has been a high-profile leader in Chicago’s Auburn-Gresham neighborhood surrounding the church and an outspoken advocate against gun violence for years. He addressed Tyshawn’s mother, Karla Lee, and his father, Pierre Stokes, in his sermon.

“This morning we meet at the uncomfortable intersection of pain and anger,” he said, “the intersection we have seen far too often.”

It would be wrong to say Tyshawn, an active child who loved school, video games and basketball, was in the wrong place at the wrong time, Father Pfleger said.

Father Pfleger acknowledged that he is no fan of the prison system, but called on anyone who knows who shot Tyshawn to speak up because anyone who would target a child should be locked up, he said.

The code of silence — which Father Pfleger said exists not only on the streets, but also among law enforcement, in the church and among politicians — cannot lead people to protect Tyshawn’s killer out of fear, he said. “Something has to rise up in us and say ‘Enough! I will not be quiet!'” he said.

St. Sabina donated $5,000 to a reward fund for information leading to the arrest and conviction of the killer; that fund has reached $55,000.

Father Pfleger went on to indict a society and a system that allows not only crime, but poverty and despair and unemployment, to flourish in some communities, calling out politicians, police, and the entertainment and gun industries, among others. He also asked everyone in the congregation to take a look at themselves.

In the end, though, Father Pfleger said, believers know that Tyshawn now is living his eternal life. He spoke of Tyshawn stepping onto a heavenly basketball court and meeting many of those who have gone before, recalling the names of many young people who have been killed by gun violence in Chicago and around the country, including Tamir Rice, Trayvon Martin, Michael Brown and Hadiya Pendleton and then connected them to martyrs of the civil rights movement from decades past, citing Emmett Till and the four girls killed in a church bombing in Birmingham, Alabama, in 1963.

Dozens of members of Tyshawn’s extended family and friends and classmates from Joplin Elementary School filled the front pew. The congregation included congressmen and aldermen and actor Nick Cannon as well as community members and neighbors, and U.S. Rep. Bobby Rush delivered the closing prayer.

Chicago Mayor Rahm Emanuel and U.S. Education Secretary Arne Duncan attended the visitation before the service, and celebrities including the Chicago Bulls’ Joakim Noah and filmmaker Spike Lee sent letters of condolence. Among the messages from religious leaders was a letter from Chicago Archbishop Blase J. Cupich, Father Pfleger said.

Chicago police have suggested that he was targeted in retaliation for what his killer believed were the gang activities of his father.

His father has denied being in a gang and has told reporters he does not believe that retaliation was the motive.

As of Nov. 11, there had been 428 murders reported in Chicago in 2015. Eight of them occurred between Tyshawn’s death and his funeral.