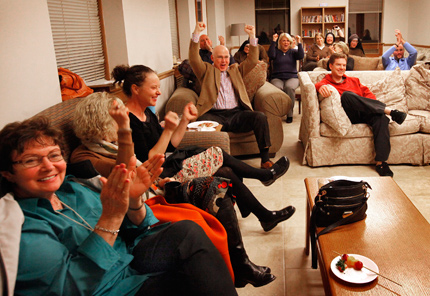 Franciscan Sister Alicia Torres joins friends and people from the neighborhood for a viewing party at Our Lady of the Mission on Nov. 9. They gathered to watch Sister Alicia compete and win $10,000 on a Thanksgiving episode of the Food Network's "Chopped." She says the money will go to feed the poor in the community. (Karen Callaway/Catholic New World photo)

CHICAGO (CNS) — It looked like prayer and the Lord were on Franciscan Sister Alicia Torres’ side as she won a special Thanksgiving competition on the Food Network’s “Chopped,” which aired Nov. 9.

On the show, Sister Alicia, 30, a Franciscan of the Eucharist of Chicago who ministers at Chicago’s Mission of Our Lady of the Angels, competed against three other chefs who, like herself, work in soup kitchens.

In the first round, the chefs made appetizers using typical Thanksgiving leftovers of turkey, cranberries, green beans and potatoes. They were given similar ingredients to make entrees and then dessert. The chefs competed for a $10,000 donation to their charity.

The fact that she was able to go on the competition at all was a sign from God, she said.

“I mean, come on. Why did God take me to this place and on this show if he wasn’t going to do something really powerful with it?”

Sister Alicia’s cooking skills come in handy during regular meals for the neighborhood such as the Tuesday program for seniors.

“We have about 30 to 50 senior citizens from the neighborhood that come together for a Bible study, exercise and then we serve them a healthy meal. That’s a really great opportunity, not only to get them food that’s healthy but also to build community,” she said. “So everything that we do we try to connect our faith — you know, our love for Jesus and our faith in the Lord and how he provides for us because everything here is through divine providence, through God’s graciousness to us through those people he inspires — but also in addition to that (is) building that community.”

Our Lady of the Angels is located in a Chicago neighborhood that is home to crime, violence, drug trafficking and poverty. It also is the site of a tragic school fire in 1958 that claimed the lives of 92 children and three religious sisters.

In 1990, the Archdiocese of Chicago closed the parish and the school. Chicago Cardinal Francis E. George wanted to maintain a Catholic presence in the area so in 2005 he invited Father Bob Lombardo, a Franciscan Friar of the Renewal, to create a mission that later led to the formation of a religious community.

The mission assists about 700 families a month with food, clothing and household goods through its food pantry. Food and staples come from both the Chicago Food Depository, parishes and area businesses such as Whole Foods and O’Hare Airport. In addition, a monthly mobile food pantry assists about 250 to 300 families the first Saturday of each month.

Sister Alicia joked that “the process of elimination” led to her becoming lead chef for her community. “You know when you enter religious life you come to serve, right? And you come to share your gifts and talents that you probably haven’t before. I always loved cooking before I was a sister. I was always known in college for the big dinners and cheesecakes.”

When she entered religious life, she was the one in the community with the most cooking experience. The fact that she can cook well, despite not being an organized person, surprises her.

“For whatever reason, when I am in the kitchen and when it comes to food, it’s like, bam, like I can actually do it,” she said. “I think that there’s certainly a gift from God when it comes to me and food because I have no professional training in cooking. Nothing. But, for whatever reason, I have the ability, I think, through the Lord to help get out a breakfast for 500 people.”

For larger events, the mission requests specific types of food from donors so they know the staples will be available. Where Sister Alicia’s creativity comes in is during the smaller events, like the quarterly community lunches and archdiocesan events where the sisters have to use what they have on hand or what groups bring.

Sister Alicia wasn’t familiar with “Chopped” until she heard the show was looking for women religious participants. She went to Father Lombardo, telling him, “You know, I think I have a fairly good chance of getting on this TV show.” He gave his permission, she applied and within 24 hours of receiving her application, the show’s producers gave her a call.

After it was over she called the whole experience “incredible” and was grateful the show raised awareness about hunger.

This is not the first time a sister from Our Lady of the Angels has been in the spotlight. Sister Stephanie Baliga was recently featured in The Wall Street Journal and Runner’s World magazine for trying to qualify for the Olympic trials during the Bank of America Chicago Marathon.

“I’m thrilled that they are able to use the gifts that God gave them,” Father Lombardo said. “The religious life should be geared toward us using our gifts at the service of God and the church.”

NEXT: New Jersey Catholic hospitals worry they’ll be left out of new alliance