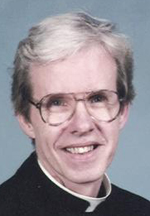 Father John (Jack) A. Fitzgibbons, 73, who began his ministry as an Augustinian and continued it as a diocesan priest, died at St. Martha’s Manor in Downingtown on Oct. 25.

He was ordained Sept. 7, 1968 by Bishop Gerald V. McDevitt at St. Denis Church and among his assignments was St. Nicholas of Tolentine Parish in the Bronx, N.Y., where he taught at the former high school of the parish and is remembered as a brilliant, funny and wonderful person and teacher, with hundreds of former students sending condolences on his death, according to his brother, Dr. Richard Fitzgibbons.

He was the eldest of five children in his family, and “we were all pleased that the Lord chose him to serve the church as a priest,” Dr. Fitzgibbons said.

“I first met him in Fallsington,” said Father James C. Sherlock, pastor of St. Colman Parish in Ardmore. “He had health problems but he liked to walk and he was very spiritual. Although he wasn’t athletic, he loved to watch the kids’ sports games and the people appreciated that. He was very good in ministry to the sick.”

Concelebrants include Msgr. Daniel J. Sullivan and Father Sherlock, who will be the homilist.

In addition to his brother Richard (Adele) he is survived by his brother James (Margaret); his sisters Mary Jane Tadeo and Julia, and many nieces and nephews.

NEXT: Father Wiedmann, pastor emeritus of Queen of the Universe Parish, dies