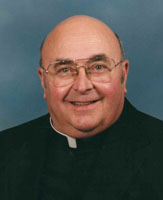 Father Paul A. Wiedmann, 80, pastor emeritus of Queen of the Universe Parish in Levittown, died Nov. 25.

Father Wiedmann was born in Philadelphia, the son of the late John A. and Marie (Roppelt) Wiedmann.

He attended St. Matthew School in Philadelphia; St. Joseph’s Preparatory School and La Salle College before entering St. Charles Borromeo Seminary. He was ordained May 18, 1963 by Cardinal John Krol at the Cathedral Basilica of SS. Peter and Paul, and his first assignment was as parochial vicar at St. Ann Parish, Phoenixville.

He also served at St. Henry in Philadelphia; St. Frances Cabrini in Fairless Hills; Our Lady of Fatima in Secane; St. Joseph in Downingtown and Holy Innocents in Philadelphia. He was appointed pastor of Queen of the Universe Parish in 1990 and named pastor emeritus in 2008.

Father John Moloney served as parochial vicar under Father Wiedmann for more than 10 years, and during that time there was never a cross word between them.

“We respected each other,” Father Moloney said. “He respected me as the assistant, and I respected him as the pastor. I must say he was the gentlest priest I could ever imagine. Even when he was sick, he never complained; he was a gentle, caring, humorous guy.”

When Father Wiedmann arrived at Queen of the Universe there was a $1.5 million debt, and he worked diligently to reduce it but never at the expense of the sacramental programs, Father Moloney explained. “He was very concerned about other people, especially their spiritual life,” he said.

Mary Harrington, who was hired by Father Wiedmann as business manager for Queen of the Universe, remembers him as “very fair and generous.” If he went shopping on his day off he would always bring a little something back to the staff, maybe a plant or candy.

She also stresses his stewardship qualities, not leaving the parish in debt, but there was that spiritual side too. “His homilies were very good,” Harrington said.

Reception of the Body of Father Wiedmann will be Wednesday, Dec. 2 at 9 a.m. at Queen of the Universe Church, followed by a viewing and his 11 a.m. Funeral Mass with Auxiliary Bishop Robert P. Maginnis as the principal celebrant. Concelebrants will include Msgr. Charles McGroarty, Father Michael Hennelly and Father Moloney, who will be the homilist.

Interment will be at Our Lady of Grace Cemetery in Penndel.