Freelancing the religious life: An ‘urban hermit’ tells her story 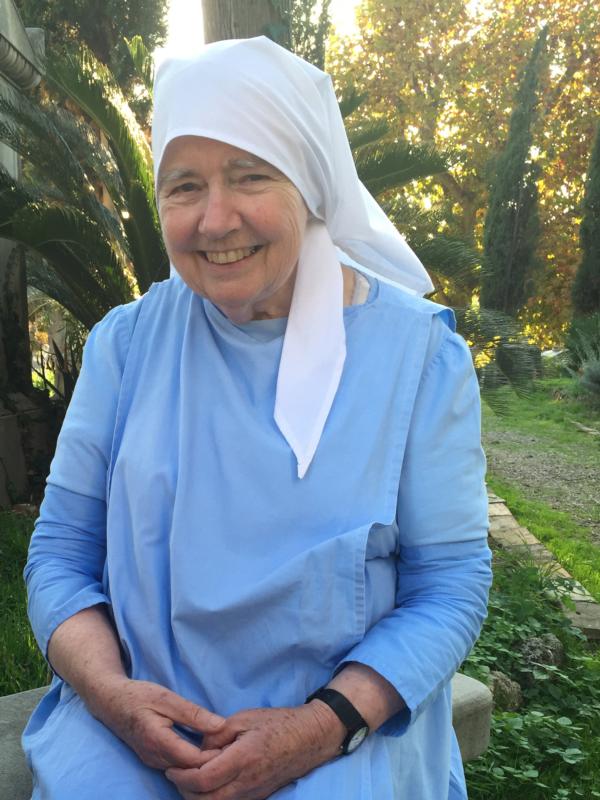 Julia Bolton Holloway, a Catholic hermit and the caretaker of Florence’s “English Cemetery,” poses for a photo Nov. 10. She said her lifestyle is a kind of religious “freelance.” (CNS photo/Robert Duncan)

FLORENCE, Italy (CNS) — Julia Bolton Holloway, a Dante scholar with a doctorate in medieval studies, lives among some of the greatest monuments of the Renaissance.

She is also a Catholic “urban hermit,” who practices contemplative solitude when not tending the grounds of a Florence cemetery or assisting families of the migrant Roma population.

What the 78-year-old Englishwoman called her “crazy life” journey has included volunteer work in the U.S. civil rights movement, an unhappy marriage followed by divorce and a period as an Anglican nun. After her convent was closed following a financial dispute with Anglican bishops, she moved to Italy to find a new way of living her vocation.

Holloway attributes her decision to become Catholic to her favorite saint, the mystic St. Julian of Norwich, as well as to St. John XXIII, who took the first steps toward reconciling the Anglican Communion and the Roman Catholic Church.

Holloway said because she was raised Anglo-Catholic, she never felt the division between the two churches. “I always felt my work should be an ecumenical ministry,” she told Catholic News Service.

Her religious life, which includes praying the Liturgy of the Hours and attending daily Mass, exists outside of any congregation or movement; her vows are made directly to God.

“I feel that if you’re on the margins, the strange thing is that you have more power,” Holloway said. “If you are not within a structure, you’ve got nothing to lose, then in a strange kind of way you gain everything.”

Holloway, who is a writer, carpenter, seamstress, cultural critic, religious website designer and great-grandmother, said the eremitical life enables her to focus on her many projects. One of those is lobbying local authorities and international courts to allow Roma families to work and retain custody of their children, who are often taken from them by Italian social services.

Roma — often known as Gypsies, though many consider the term offensive — are models of living in harmony nature, Holloway said.

Holloway recently traveled to Bucharest, Romania, to speak to two Roma brothers who manage an NGO there about her idea of opening a publishing house for children’s books — since, she said, modern ones are “ugly and mechanical; violent colors, ugly shapes.”

By contrast, she said, Roma illustrators are careful to include nature; “they go and study in the Greek monasteries to do the icon painting and the frescoes in the churches.”

“Today we tend to ignore the natural shapes, the plants, the fruit,” and “most of our clothing now makes us look like machines, and machines have no soul,” said Holloway, who deeply admires the teaching of Pope Francis, particularly his encyclical on the environment, “Laudato Si.'”

“I think modern education has become too technical, too specialized, and it’s destroying the earth quite literally with armaments,” she said. “I think we need to get back to the family, to the land, to nature, to God.”

As part of her own efforts at sustainable living, which she considers part of her eremitical vocation, Holloway rides a bicycle and sews her own clothes.

Hermits need not wear a habit, Holloway explained, but she continues to wear the blue habit and headdress of her former Anglican community. Blue, she said, is the “color of work, it’s the color of humility, it’s the color of learning.”

Holloway, who once taught English at Princeton University, now teaches Roma families how to read and write, hosting a literacy school on Sundays.

Recalling her experience in the civil rights movement, Holloway said her work with the Roma has “ended up being like registering blacks to vote, it’s enfranchising.”

Of all of her life projects, Holloway takes a particular consolation in writing. Many of her published books review the history of women in the church and the theology of female saints.

Speaking about her education and earlier life in the convent, Holloway said there were some clergy who saw her as a threat because she was studying ancient Hebrew and Greek.

“My diocese in Sussex was very reactionary and very much against the movement of priesting of women,” Holloway explained. “I was saying I am not interested in being ordained a priest, I’m interested in all of the traditional ways women have supported the church as abbesses, as scholars.”

“The eremitical life is an excellent mode of life to be a writer, because what you do is you reduce all the false stimuli. There’s no television, you’re just not interested in consumerism,” she explained.

“With writing you transcend time. It’s a conversation you have listening to (Sts.) Augustine and Monica. … You arrive at that silence, which is the like the silence of a Quaker meeting, where the Spirit speaks,” she said.

Being a hermit is a liberating lifestyle, Holloway said.

“If you are doing it from the spiritual base, from the base of prayer and contemplation, somehow it takes off, it has its own energy,” she said, “it doesn’t come from me.”

NEXT: South of Paris, woman prays for longtime friend injured at Bataclan