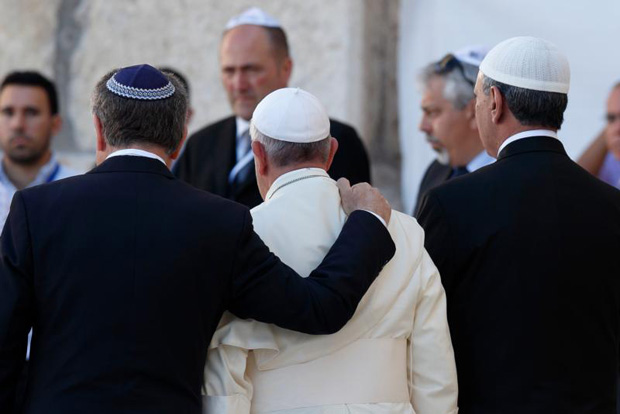 Pope Francis walks with Argentine Rabbi Abraham Skorka, left, and Omar Abboud, a Muslim leader from Argentina, as he leaves after praying at the Western Wall in Jerusalem in this May 26, 2014, file photo. In his official proclamation of the Holy Year of Mercy, Pope Francis called for "fervent dialogue" between Christians, Muslims and Jews. (CNS photo/Paul Haring)

VATICAN CITY (CNS) — Opening the Holy Door of St. Peter’s Basilica and the Year of Mercy, Pope Francis also hopes to open a year of “fervent dialogue” among Christians, Muslims and Jews, so that all who profess faith in a merciful God may be stronger in showing mercy toward one another.

The opening of the special jubilee year just a month after the terrorist attacks in Paris and at a time of continuing strife in the Holy Land and around the Middle East shows the size of the challenge facing those committed to interreligious dialogue, but it equally shows the need.

In his official proclamation of the Year of Mercy, Pope Francis noted that the Christian profession of faith in God’s mercy “relates us to Judaism and Islam, both of which consider mercy to be one of God’s most important attributes.”

He prayed that the jubilee would “open us to even more fervent dialogue so that we might know and understand one another better; may it eliminate every form of closed-mindedness and disrespect, and drive out every form of violence and discrimination.”

“This jubilee of mercy is an inspiration,” said Shahrzad Houshmand, a Muslim scholar who teaches at Rome’s Pontifical Gregorian University. “At this difficult moment in history, it is time to return to the original name of God who, for all three of us, is mercy. We have lost so much on the way because of pride, because we have not recognized each other as brothers and sisters and some have even gone so far astray that they see each other as enemies. This jubilee can help us return to the roots of our religious existence which is based on the name of God, the merciful.”

For Rabbi Naftali Brawer, CEO of the Spiritual Capital Foundation in London, being religious means imitating God, particularly in the pursuit of justice and the demonstration of mercy.

Making the world a better place, he said, “is all about individuals, it is about bottom up, it is about little acts of mercy. … It’s not going to happen through conferences of interfaith leaders making more proclamations about the meaning of mercy or theologians delving deeply into what mercy means, but it’s about people of different faiths living together and trying to see the other for who the other really is and responding accordingly.”

“It happens on the ground,” the rabbi said. “It happens in a million different little acts every day.”

For Jews, he said, God’s justice and mercy go together. “There is a passage of Jewish teaching in the Talmud that states that if someone is merciful to the cruel, they will end up being cruel to the merciful. In other words, justice is important in Judaism; it is not just unadulterated mercy.”

“But what we do in our liturgies,” the rabbi said, “we are constantly asking God to temper his justice with mercy.”

It is a “bit of a caricature” to say the might of God in the Hebrew Scriptures is greater than his mercy, Rabbi Brawer said, because the Bible presents different images of God. “There are times in which he is angry and vengeful, but then there are times in which God is extraordinarily vulnerable, betrayed and almost astounded by the behavior of a people he loves who are not returning that love. So, yes, God can be vengeful and wrathful and demand justice, but then he very often allows humans to challenge that, invites humans to challenge that and I think that’s the fuller picture.”

For example, he said, after the Israelites worship the golden calf, God tells Moses, “‘I’m going to wipe this lot out,’ — that’s one snapshot — but what’s equally important is the following snapshot in which Moses intercedes and God gives way, and that’s an extraordinary thing.”

Houshmand said 113 of the 114 chapters of the Quran open with the phrase, “Bismillah al rahman al rahim,” usually translated as, “In the name of God, the most gracious, most merciful.” Muslims begin their formal prayers with the phrase, they say it before meals, begin formal speeches with it and recite it at the beginning of wedding and funeral rites.

“Why does the Quran repeat this name so often? Maybe it is because God knows that unfortunately the human heart needs to hear repeated, constantly and often, that God is mercy,” she said. “With our instincts and selfishness, our failures and pettiness, the human being tends always to flee from mercy, so the Quran repeats and repeats and repeats it.”

As in Catholicism, in Islam invoking God’s mercy is particularly tied to asking God’s forgiveness for one’s sins, she said. Islam teaches that “God, the fullness of love, knows and sees the mistakes, errors and sins of the human person. But his mercy never stops in the face of anything. His mercy embraces all of creation — the good and the bad, saints and sinners — and he says, ‘I see you, I see your sins, but I am still merciful always. And the doors of my mercy, of my forgiveness are always, eternally open to you.'”

Muslims, she said, believe that at different times of the year — such as the last days of the fasting month of Ramadan — the gates of heaven open wider and God’s mercy flows more abundantly. “I see the jubilee as having this purpose, too, of healing deep wounds. We must welcome this call to mercy and remember than no one is perfect, no one is without need of mercy. Like Jesus said, ‘Let whoever is without sin throw the first stone.'”