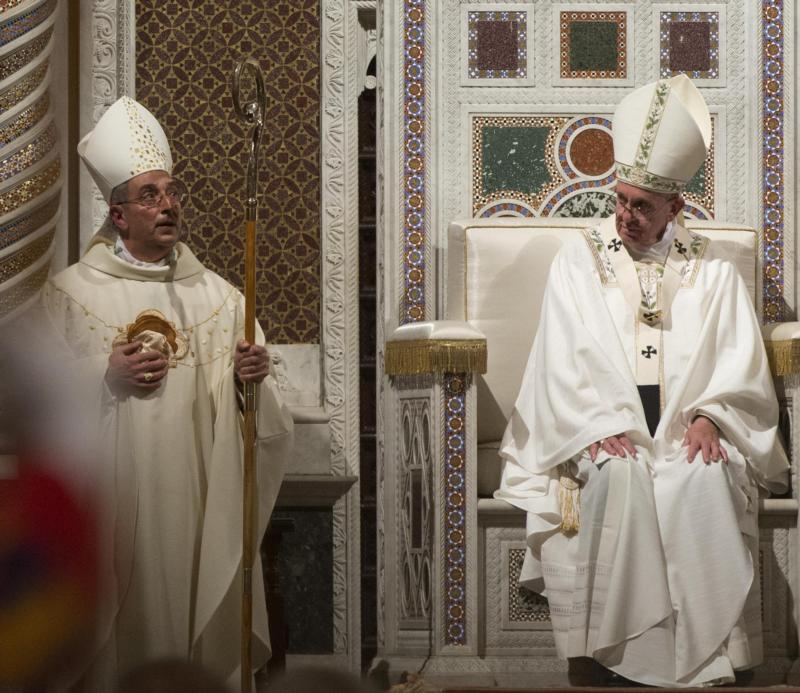 Pope Francis sits in the papal chair as he celebrates the ordination Mass of Bishop Angelo De Donatis, left, as an auxiliary bishop of Rome in the Basilica of St. John Lateran Nov. 9. (CNS photo/Claudio Peri, EPA)

ROME (CNS) — Ordaining a Rome pastor and seminary spiritual director as an auxiliary bishop of Rome, Pope Francis pleaded with him to be merciful and to give short, clear homilies.

Ordaining Bishop Angelo De Donatis, 61, Nov. 9 at the Basilica of St. John Lateran, Pope Francis reminded the new bishop of something he had told him earlier.

“Let your words be simple so that everyone can understand. Don’t give long homilies,” the pope said. “Allow me to ask you to remember your dad and how very happy he was to have found another parish in a town nearby where the Mass was celebrated without a homily!”

“Homilies should be the transmission of God’s grace. Simple, so that everyone can understand them and everyone will want to become a better person,” Pope Francis told the new bishop.

The Mass was celebrated on the feast of the dedication of the basilica, which serves as the cathedral of the Diocese of Rome.

As is customary, the pope used the homily prescribed for the occasion by the Italian bishops’ conference, but as he often does, he added a few personal comments, such as those about Bishop De Donatis’ father.

After anointing the new bishop with oil and giving him the Book of the Gospels, the pope was about to present him with his episcopal ring, a “sign of fidelity,” but first Pope Francis told him, “Do not forget: Before this ring, there were the wedding bands of your parents. Defend the family!”

In his homily, the pope asked him to be patient with priests, seminarians, the poor and laypeople who come to him looking for assistance and counsel. “Many times you will need a lot of patience,” the pope said, “but the kingdom of God is built that way.”

“And close to the beginning of the Year of Mercy, I ask you as a brother to be merciful,” the pope said. “The church and the world need so much mercy. Teach priests and seminarians the path of mercy with words, yes, but especially with your behavior.”

In his mercy, God always makes room for everyone in his heart, Pope Francis said, so priests and bishops should “never chase anyone away.”