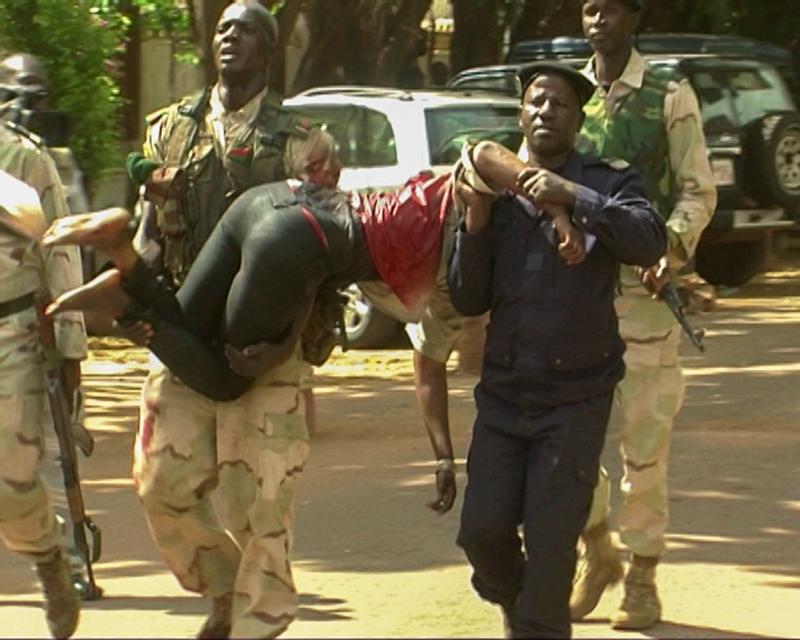 An injured hostage is carried by security forces from the Radisson Hotel in Bamako, Mali, Nov. 20. At least 22 people were killed that day when gunmen raided the hotel and held 170 people hostage. (CNS photo/EPA)

“Before so many lacerations in the world and too many wounds on the flesh of humanity, let us ask the Virgin Mary to support us in our commitment to imitate Jesus, our king, making his kingdom present with gestures of tenderness, understanding and mercy,” he said Nov. 22 — the feast of Christ the King — during his Sunday Angelus address.

The pope’s words came the same day he had a telegram sent to the people of Mali, expressing his condolences and spiritual closeness to those affected by the latest deadly attacks there. At least 22 people were killed Nov. 20 when gunmen raided a luxury hotel in Bamako and held 170 people hostage.

The telegram, sent on the pope’s behalf by Cardinal Pietro Parolin, Vatican secretary of state, said the pope strongly condemned and was “appalled by this senseless violence.”

“The pope implores God for the conversion of hearts and the gift of peace and invokes an abundance of divine blessings on all those affected by this tragedy,” said the telegram, which was sent to Archbishop Jean Zerbo of Bamako.

At the end of the midday Angelus appointment in St. Peter’s Square, the pope also asked people pray for his Nov. 25-30 visit to Kenya, Uganda and Central African Republic.

He prayed the trip — his first to Africa — would be “a sign of closeness and love. Let us together ask Our Lady to bless these beloved lands, so that there would be peace and prosperity.”

The pope also sent a video message to the people of Kenya and Uganda, saying he was coming as “a minister of the Gospel, to proclaim the love of Jesus Christ and his message of reconciliation, forgiveness and peace.” He said he hoped the trip would be “a source of hope and encouragement to all.”

“My visit is meant to confirm the Catholic community in its worship of God and its witness to the Gospel, which teaches the dignity of every man and woman and commands us to open our hearts to others, especially the poor and those in need,” he said in the message, sent Nov. 23.

He encouraged all people, not just Catholics, “to foster mutual understanding and respect, and to support each other as members of our one human family. For all of us are God’s children.”