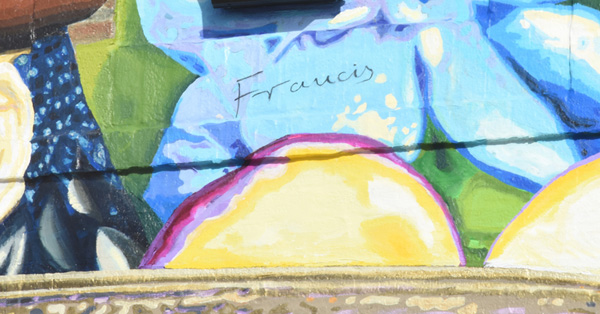 Pope Francis signed a section of the mural, “The Sacred Now: Faith and Family in the 21st Century,” during his visit to Philadelphia in September. The 4,239 square foot mural, which may set a Guinness World Record, was dedicated Nov. 30 at the future site of St. Malachy School. (Photo by Sabina Louise Pierce) 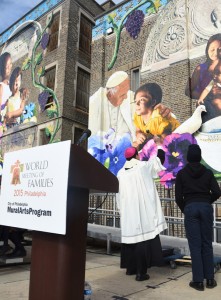 Auxiliary Bishop John McIntyre blesses the “The Sacred Now: Faith and Family in the 21st Century” mural during a Nov. 30 dedication ceremony at the future site of St. Malachy School. (Photo by Sabina Louise Pierce)

The new St. Malachy School, at 11th and Thompson Streets in Philadelphia, won’t open until September 2016, but has already made quite a splash, through the stunning 4,239 square foot outdoor mural, “The  Sacred Now: Faith and Family in the 21st Century.” It’s really a lasting echo of the World Meeting of Families held in Philadelphia in September.

But what’s outdoor art if someone hasn’t scribbled their name on it? Actually that signature tucked high up on a flower petal, is perfectly legitimate. Pope Francis himself signed it by invitation during his Philadelphia visit, and someday it could arguably be considered a third-class relic.

The mural was officially blessed on Nov. 30 by Auxiliary Bishop John McIntyre, who oversees Catholic education in the Philadelphia Archdiocese. The building itself, the former William Henry Harrison Public School, is  being completely refurbished by Independence Mission Schools as the new home for St. Malachy School and St. Veronica School, with an expected future enrollment of about 500 students. There are at this time 15 Independence Mission Schools located in former parish schools that were in danger of closing for financial reasons.

”This mural played a huge role in pulling people together,” said Anne McGoldrick, president of the 15-school Independence Mission School System. “People of all ages will draw hope and inspiration from it.”

In his petition to the Father, Bishop McIntyre prayed, “We ask you to look upon this mural and to bless it. May it be a cultural reminder of what you have done for us through your son, Jesus. May it be a continual reminder of how that gift continues on through the Church, most especially through Pope Francis.”

The dedication was attended by a host of dignitaries from the Church and state, and most importantly students from heavily African-American St. Malachy School and heavily Hispanic St. Veronica School, some of whom participated in the painting of the mural.

“I worked on the panel that has the boy in it,” said Iyanna Norcome, a sixth-grader at St. Malachy. “I think it is beautiful.”

That was the same sentiment of Ginny Rivas, a sixth grader at St. Veronica, whose contribution is also on that panel.  “It’s special for me; I will never forget it, ever,” she said.

Leading the dignitaries was Philadelphia Mayor Michael Nutter, an enthusiastic supporter of everything to do with the World Meeting of Families, and a graduate of the former Transfiguration of Our Lord School, whose best friend is a St. Malachy graduate.

The mural, he said, “Is a lasting legacy of the powerful memories and inspiration we all shared together in September and the many months leading up to it. Its imagery conveys the power of family and love in all of its many forms.”

Donna Crilley Farrell, executive director of the World Meeting of Families, observed, “The beautiful design perfectly embraces the theme of the World Meeting of Families, ‘Love is Our Mission, the Family Fully Alive,” and with more than 2,700 individuals contributing to the mural, essentially a gigantic paint by numbers based on a painting executed by mural artist Cesar Viveros.

It depicts 12 individuals of various ethnicities and ages of the human family in Philadelphia along with Pope Francis himself.

If one envisions thousands of people, including kids scampering up scaffolding to paint a wall that’s not how it’s done these days.

In a process pioneered by Philadelphia’s Mural Arts Program, the actual painting was done on 153 panels faced with very thin but sturdy synthetic “parachute cloth,” which were then fastened to the wall, seamlessly retaining the contours of the brick masonry.

Because it was not painted at the site, it was possible to have painting sessions at many locations, including schools, parishes and health facilities. With so many painters involved, it is expected to establish a Guinness World Record at least temporarily, because the Mural Arts Program under director Jane Golden has made Philadelphia the wall mural capital of the world, and it is still growing.

“We now have 4,001 murals,” Golden said. “They are an autobiography of our city. This project to me was so meaningful. Pope Francis is an extraordinary person and to be able to have done a project connected to his visit was nothing short of profound and extraordinary.”

NEXT: Archbishop Chaput responds to shootings in San Bernadino, Calif.