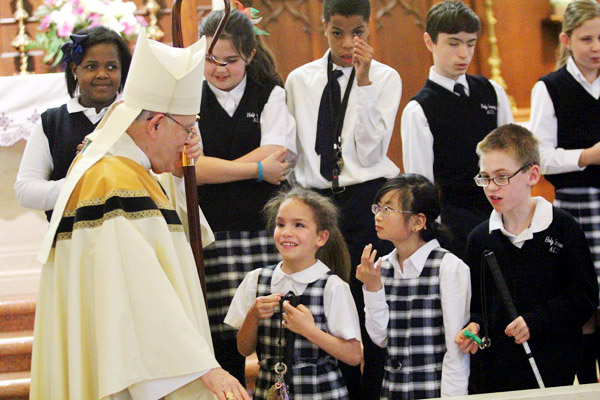 Archbishop Charles Chaput talks with students from St. Lucy Day School for Children with Visual Impairments after celebrating a Mass to mark the 60th anniversary of the school. (Photos by Sarah Webb) 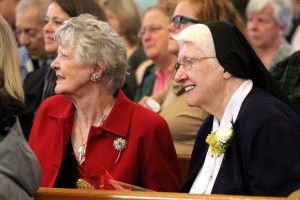 Betty Crosson, who first petitioned Bishop John O’Hara to start St Lucy School, and Sr. Anne Marie Harrison, one of the first teachers and later principal, are all smiles as students perform a concert for guests.

In 1955 Betty Crosson desperately wanted to enroll her twin sons in Catholic school, but there was not a single one in the Philadelphia area that could meet their needs.

Jack and George, then five years old, were blind, probably because of the administration of oxygen as infants, something now known to cause blindness.

“I just knew they needed a school, and I went to the bishop,” Crosson said. That bishop was Archbishop John F. O’Hara, and in answer to her petition, St. Lucy Day School for Children with Visual Impairments was established first at a property near St. Francis de Sales Church in West Philadelphia, and most recently at Holy Innocents Parish in the Juniata section of Philadelphia in a building they share with Archbishop Ryan Academy for the Deaf.

Archbishop Charles Chaput visited St. Lucy Day School on Dec. 14 to celebrate Mass for St. Lucy’s 60th anniversary, and Betty Crosson was a guest of honor as were many of the Sisters, Servants of the Immaculate Heart of Mary who have conducted the school from the beginning.

“I was one of the first teachers,” said Sister Anne Marie Harrison, who was just 21 and known as Sister Gerald Mary at that time. “We started with four children in kindergarten (including the Crosson twins), and it rapidly grew.”

Sister Anne Marie taught for an initial seven and a half years, then came back later as principal for 11 years.

In his homily, Archbishop Chaput remarked on the essential role St. Lucy has played in the Archdiocese and expressed gratitude both for Archbishop O‘Hara in establishing the school and the Immaculate Heart Sisters for conducting it.

Reflecting on blindness, he said, “it doesn’t matter how much we see with our physical eyes as it does with our spiritual eyes which are more important. They are our true eyes; thank you for helping us see that.”

That feeling was reiterated by Father Thomas Higgins, pastor of Holy Innocents, who spoke to the assembled students of St. Lucy and Archbishop Ryan.

“You do so much good for all of our students,” Father Higgins said.  “Sometimes we take for granted we can see and hear. You share all of your wonderful gifts with us.”

Part of that sharing was the students of the two special schools performing the lay ministries at the Mass as well as presenting a Christmas concert afterward.

Shannon DiGiuseppe, a St. Lucy fourth grader, who has been at the school from kindergarten was fully confident as a cantor. “St. Lucy’s,” she said, “is really, really good. I feel it teaches me everything I need to know.”

It has been that way from day one, according to Sister Lisa Altieri, St. Lucy’s principal. “Now that we have Archbishop Ryan Academy with us, we have expanded,” she said, “but there is still room for more.”

PREVIOUS: Celebrating the feast of Our Lady of Guadalupe

NEXT: Goya donates 50,000 pounds of food to Nutritional Development Services