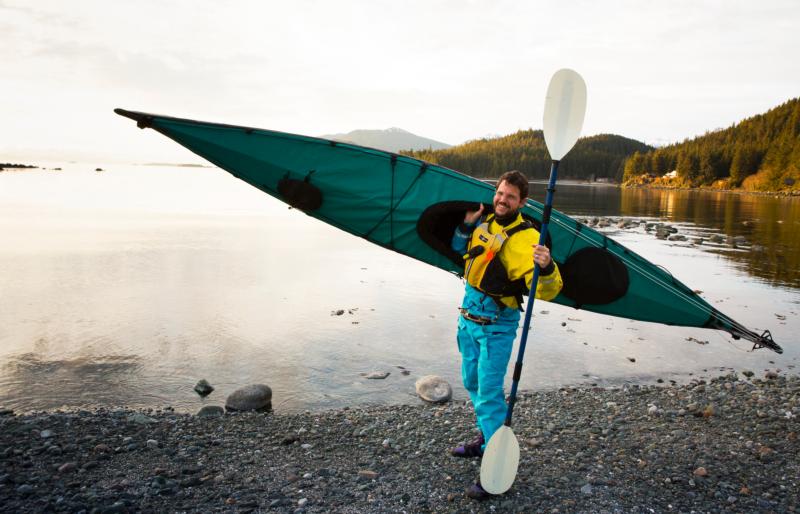 Outdoor enthusiast Father Thomas L. Weise stands with his kayak on a shoreline of Lynn Canal outside of Juneau, Alaska, in 2014. The 46-year-old priest of the Diocese of Juneau died Dec. 6 after suffering a cardiac arrest while visiting family in California. (CNS photo/Nancy Wiechec)

PHOENIX (CNS) — The Diocese of Juneau, Alaska, is mourning the loss of a young priest, an outdoorsman who spread the Gospel in tiny Alaskan communities as well as online.

Father Thomas L. Weise Jr. died Dec. 6 in San Luis Obispo, California, after suffering cardiac arrest while on a family visit. He was 46.

One of 10 priests in the diocese, Father Weise served as pastor of two of southeast Alaska’s small island parishes, St. Catherine of Siena in Petersburg and St. Rose of Lima in Wrangell.

Referring to himself as a missionary priest, Father Weise often traveled by small plane between Petersburg and Wrangell to celebrate Mass each weekend. On occasion, he would paddle three to four hours by kayak to reach the parishes.

In a statement about his death on St. Rose’s website, the parish expressed its sorrow.

“We join our hearts and prayers with his family in California, and friends worldwide, in thanking the Lord for the gift of Father Thomas’ life,” it said, “and for the many ways that he touched our lives and enthusiastically shared the good news to all of God’s people.”

Born and raised in California, a Coast Guard assignment drew him to Alaska.

He had entered the U.S. Coast Guard Academy in Connecticut after high school and graduated with a degree in marine science.

“I came up for the Valdez oil spill cleanup in 1990 … and just fell in love with Alaska,” he told Catholic News Service during an interview last year. “It was so beautiful up here, even all goopy with oil.”

He said he admired Alaskans for their tight-knit communities and their “team spirit.”

In 1996, he began studies at Mount Angel Seminary in Oregon and was ordained a priest for the Juneau Diocese in 2002.

His first appointment was as an associate pastor. Later, he became rector of Juneau’s Cathedral of the Nativity of the Blessed Virgin Mary and in 2010 was named pastor in Petersburg and Wrangell.

An avid outdoorsman, Father Weise hiked and kayaked throughout southeastern Alaska. He told CNS that one of his favorite spots was Mendenhall Glacier near Juneau.

On his blog “Semper Gumby In Alaska,” the priest offered weekly audio homilies.

In his last post, dated Nov. 22, the feast of Christ the King, he gave a reflection on God’s grace, how sin can sever the bond with God and how the sacrament of reconciliation can heal it.

He said dying is not feared by those who have grace, who bond to God, because with earthly death “the one who loves you beyond your wildest imagining is welcoming you home, where there is no suffering, where there is no sin, darkness, (or) brokenness.”

Father Weise belonged to the Juneau chapter of Veterans for Peace, the Alaska chapter of the environmental group Interfaith Power and Light and was a founding board member of Juneau’s Canvas Art Studio for artists with developmental disabilities.

A vigil and funeral Mass were scheduled for Dec. 13 and 14 at Mission San Luis Obispo de Tolosa in San Luis Obispo, California. Temporary interment of the priest’s cremains was to take place at the Old Mission Catholic Cemetery columbarium there.

At a later date, final interment will take place at the columbarium at the Shrine of St. Therese near Juneau.