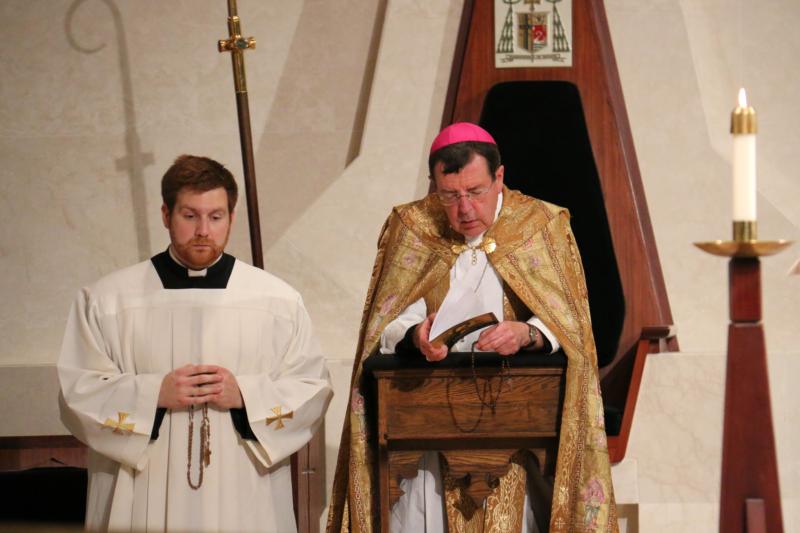 Detroit Archbishop Allen H. Vigneron and Father Stephen Pullis kneel to pray the rosary during a special prayer service in late November for Christians in the Middle East at the Cathedral of the Most Blessed Sacrament. (CNS photo/Jonathan Francis, Archdiocese of Detroit)

DETROIT (CNS) — As war and violence continue to rage in Iraq and Syria, hundreds of thousands of refugees have fled their homeland to find security, regardless of what the future may hold.

Refugees making their way toward Europe and the United States are seeking a better, safer life, refugee advocates said.

At the same time, many politicians and citizens have begun debating the country’s moral and political responsibility when it comes to assisting those in need and defending the country’s borders.

Catholic Charities of Southeast Michigan has resettled 400 refugees in the state and wants to help more in collaboration with federal and state officials. Along with partners that include the U.S. Committee for Refugees and Immigrants and Lutheran Social Services of Michigan, the agencies have settled an estimated 1,500 refugees in metropolitan Detroit.

Jeralda Hattar, director of refugee and immigration services for Catholic Charities of Southeast Michigan, said there are misconceptions about resettling refugees from Iraq and Syria despite the fact that refugee resettlement in the region is nothing new.

“The majority of these cases have been Iraqi refugees. So far, we’ve only settled two Syrian families,” Hattar told The Michigan Catholic, newspaper of the Detroit Archdiocese.

There are more than 150,000 Chaldeans in metropolitan Detroit — the largest community in the country — and the area is home to the largest Arab population in the U.S. per capita.

“The state of Michigan resettles an average of 6 percent of the refugees coming into the U.S.,” Hattar said. “This is in part because of our demographics, but also because have so many welcoming communities with Detroit, Washtenaw County and Grand Rapids. We’re one of the top five states in refugee resettlement.”

Hattar said Catholic Charities has worked to educate the public on the situation facing refugees, including those from Syria. Nearly 75 percent of Syrian refugees are women and children, she said, and of those who are men, a large majority are older.

Calls from some Americans to accept only Christian refugees into the U.S. are unrealistic, she added.

“That’s never going to happen,” Hattar said. “What the Christian community needs to keep in mind is whatever you advocate nationally that is against accepting Muslim refugees ultimately affects both Muslim and Christian refugees regardless because the federal government will not distinguish in their security process.”

In November, 31 state governors said their states would not welcome any more Syrian refugees because of security concerns.

Hattar said Catholic Charities has been in contact with Gov. Rick Snyder’s administration regarding the Michigan’s refugee policy. She said the state continues to accept refugees while the governor discerns whether to move forward with a proposed expansion of the program.

“The governor’s administration has been very interested in making Michigan a welcoming place,” Hattar said. “His administration established the Office of New Americans, working on issues of integration, making sure refugees are successful when they arrive.

“He established a task force to look at how we work on different issues regarding refugees and what we can do to increase the number of refugees in collaboration with the federal government. His intention is to put the plan to increase the number of refugees coming in on hold until he gets written confirmation from the federal government about the security process.”

Since President Barack Obama announced a plan to resettle an additional 15,000 refugees, Hattar said Catholic Charities has the capacity to accommodate 1,100 refugees in Michigan.

For now, the agency has resettled 294 out of a projected 650 refugees for fiscal year 2015. The agency asked the U.S. Conference of Catholic Bishops’ Migration and Refugee Services program to resettle 850 refugees.

Logistical constraints and delays in the security screening process have slowed the flow.

Concerns have been raised about the vetting process, especially after French authorities learned that one of the extremists who participated in coordinated attacks in Paris Nov. 13 possessed identification papers from a refugee checkpoint in Greece.

When refugees apply for asylum, the United Nations High Commissioner for Refugees provides camps for temporary living. Before arriving in the United States, the U.S. departments of state and homeland security and the Federal Bureau of Investigation vet each candidate in a process that can take up to 24 months to complete.

Once cleared, refugees are assigned to organizations such as Migration and Refugee Services, which study each case to determine where to resettle an individual or families. When MRS sends a case to Catholic Charities of Southeast Michigan, staff members interview the newcomers to learn where they want to live, what language and work skills they have and whether they have family in the area who might assist in their relocation.

“Our goal is to work with every individual refugee to get them to the point of self-sufficiency,” Hattar said. “We consider what living preferences they might have, and if they are people of the same culture in the area. But we do promote diversity, because we don’t want to create ‘refugee communities’ that would not be economically viable and would not set people up for success.”

As more refugees come into the area amid increasing debate among lawmakers, Hattar encourages local Catholics to call their government officials to show support.

“I would encourage all Catholics to review Catholic social teaching, read the many verses of the Bible concerning people on the run and Jesus calling on us to help a stranger. Contact your politicians, educate yourself,” Hattar said.

“For those who want to do more, volunteer,” she added.

“We need people to mentor refugees as they transition into life in America. Help us make our community a welcoming place and encourage them in the integration. But most of all, be open-minded.”

Meloy writes for The Michigan Catholic, newspaper of the Archdiocese of Detroit.

PREVIOUS: After shooting, Catholics in Minneapolis paving a path to peace

NEXT: Ministry provides free laundry services for the less fortunate