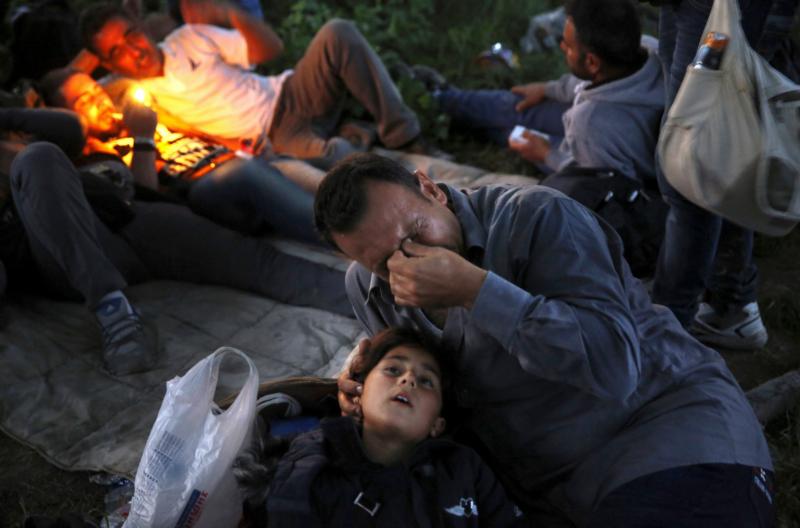 A Syrian refugee cries next to his 7-year-old daughter after crossing the border into Macedonia in early May near the Greek village of Idomeni. A coalition of religious leaders joined three U.S. senators on Capitol Hill Dec. 8 to say "enough is enough" to those who want to bar Muslim refugees from Syria and other Middle East trouble spots. (CNS photo/Yannis Behrakis, Reuters)

WASHINGTON (CNS) — A coalition of religious leaders joined three U.S. senators on Capitol Hill Dec. 8 to say “enough is enough” to those who want to bar Muslim refugees from Syria and other Middle East trouble spots from the U.S. after terrorist attacks in Paris and Southern California.

In the Nov. 13 Paris attacks, shooters identified as jihadists killed at least 129 people. In San Bernardino, California, a married couple, who authorities say were radicalized Muslims, killed 14 people and injured 21 others Dec. 2 at a county social services center.

“There is absolutely no reason to stop or pause the resettlement of Syrian refugees. The fear around this is wrong and as people of faith, we must demand more from our public officials,” said Cardinal Theodore E. McCarrick, retired archbishop of Washington.

The House has passed legislation that would pause the Obama administration’s plan to take in at least 10,000 Syrian refugees over the next year. A similar bill will be taken up by the Senate. Lawmakers backing the measures claim there are too many holes in the process to properly vet refugees to be resettled in the U.S.

“Many families find themselves between the violence behind them and the refusal of resettlement in some place with peace and safety, which is all that they really want,” said Bishop Sally Dyck of the Northern Illinois Conference of the United Methodist Church. “I trust that all of our elected leaders will not prevent these Syrian families from being able to resettle in our country.”

U.S. Senator Patrick Leahy, D-Vermont, said that “intolerance has no place in our country,” adding that accepting refugees is part of U.S. history and culture and a part “of who were are.”

“It can be done safely with the proper screening procedures,” he continued. “In the words of Pope Francis, our message to those seeking refugee should be ‘one of hope and healing, of peace and justice.’

“To respond by closing our doors to those fleeing our enemy is to give in to that enemy. It is in these difficult moments that our actions most directly reflect who we are as a nation. It is time for senators to lead by following our consciences. It is time to do what is right and moral.”

He was joined by U.S. Sens. Dick Durbin, D-Illinois, and Timothy Kaine, D-Virginia.

The senators and the religious leaders also roundly criticized an anti-Muslim backlash that has followed the latest terrorist attacks.

After the rampage in San Bernardino, Republican presidential front-runner Donald Trump Dec. 7 called for all Muslims to be barred temporarily from entering the U.S. until the government figures out what is behind such attacks.

His remarks were roundly condemned by his fellow Republican candidates, the Democratic presidential candidates and House Speaker Paul Ryan, R-Wisconsin, among others.

Reacting to such “horrific terrorist attacks” by calling for the government to suspend admitting refugees to this country “is precisely what terrorists want,” said Durbin.

“They commit these atrocities to disrupt our lives, make us look over our shoulders, and to turn neighbor against neighbor in fear. We cannot allow the United States to fall into that trap,” he added.

In the debate over refugees, “we cannot abandon the core principles that we stand for as a nation,” said Kaine. “Refugees are not our enemies. ISIL (the Islamic State) is our enemy.”

“America’s response to these attacks should be to take the fight to ISIL abroad and to strengthen our national security at home,” he said. “Our response should not be to slam the door on the children and families fleeing ISIL terrorism themselves.”

Rabbi Jack Moline, executive director of the Interfaith Alliance, said barring refugees from the U.S. because they are Muslim is a violation of the Constitution, which “says there should be no religious test” for running for office, for “our compassion” or for “the humanity of a refugee.”

“If the legacy of this country is to give to bigotry no sanction, to persecution no assistance, what does it mean when our fellow human beings who are running for their lives for their lives ask us to be true to that legacy? It means no religious test,” the rabbi said.

NEXT: Syrian family arrives in Indianapolis with ‘so much hope in their eyes’