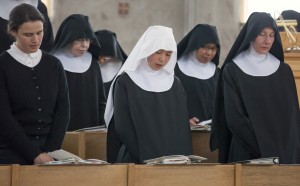 Benedictine nuns pray in the chapel in late March at the Abbey of St. Walburga on a ranch in Virginia Dale, Colo. A new report on U.S. women religious said that religious life is becoming not only more multiethnic but more international as well. (CNS photo/Jim West)

WASHINGTON (CNS) — A new report on U.S. women religious said that religious life is becoming not only more multiethnic but more international as well.

The report, “Understanding U.S. Catholic Sisters Today,” said that of all women who entered religious life in the past 10 years, only 57 percent were white, while 17 percent were Hispanic, 16 percent were Asian, and 8 percent were black — including both African-American women and those born in Africa.

Because of the growing numbers of foreign-born women religious, the report noted, Trinity Washington University recently received a grant to study and map the presence of international women religious in the United States and their evolving ministries in response to church and societal needs.

The report, released Dec. 9, was commissioned by FADICA, Foundations and Donors Interested in Catholic Activities, which represents about 50 philanthropic organizations.

It highlights the major findings of the latest sociological studies of U.S. women religious. The report was written by Kathleen Sprows Cummings, director of the Cushwa Center for the Study of American Catholicism at the University of Notre Dame. The findings “help illuminate present realities of U.S. women’s religious life,” the report said, “and point toward priorities that will help ensure a vibrant future.”

Two aspects of U.S. religious life today, according to the report, have not changed: the increasing average age of women religious and their declining numbers.

“Only 9 percent of religious sisters are younger than 60; more than two-thirds of women and men vowed religious are older than 65,” the report said.

“Women’s religious life is presently completing a fifth consecutive decade of decline,” it added. “The number of U.S. sisters has decreased by 72.5 percent in the last 49 years, and while there are recent signs that the pace of decline has slowed, there is nothing suggesting that is likely to be reversed.”

At the same time, “the most encouraging conclusion drawn from recent studies of U.S. Catholic sisters is that … many U.S. Catholic women are still drawn to religious life,” the report said. Research show that “while there is a great deal of concern about the future of individual communities and ministries, the majority of sisters remain optimistic about religious life,” it added.

The report placed the figure of women religious in the United States today at roughly 50,000 — about the same number as there had been in 1939, when U.S. population numbers were lower but vocations were on an upswing. Crowded novitiates “and overflowing convents” in the mid-20th century were an “anomaly,” it noted.

“Decreased contact with sisters not only reduces the number of women entering religious life, but also may make adjusting to religious life more difficult for those who do enter. Increasing sisters’ contact with nonmembers should be a priority,” the report said.

While those women who do join religious life are often older and better educated than those of past generations, they also bring with them student debt.

The situation has religious orders in a double bind, according to the report.

“While congregations do not want to turn away new members who offer vitality to a waning congregation, they must consider how much benefit a candidate brings to an institute compared to the burden of educational debt,” it said.

“Religious congregations do not want candidates’ guilt about burdening a congregation with student loans to dissuade them from pursuing a vocation. At the same time, the institutes do not want to make educational debt a top or even exclusive consideration in debating whether or not to accept a candidate. Yet with other financial responsibilities, such as rising health care costs that are particularly formidable for the already-aging sister population, concern regarding educational debt is an increasingly significant aspect of the discernment process.”

Another potential source of worry for vocations is that “young Catholic women show a greater disaffection than males within their generational cohort. This represents a historic reversal,” the report said. “In the past, women of every U.S. Christian denomination have prayed and attended religious services more often and held more orthodox beliefs than their male counterparts.”

The study suggested it could be “helpful for parishes and dioceses to create more space and support for discernment to all forms of consecrated life, including emerging ones.”

“From the 1840s until the late 1960s, the average Catholic woman in the United States found, through religious life, far more opportunities for education, leadership, and meaningful work within church structures than outside of them. Since the late 1960s, many of the women who would have been attracted to religious life in earlier generations are finding alternative ways to live their vocational call, both within the church and in secular society,” the report said.

One item the study recommended was further research. “The most recent study of sisters’ ministries in the United States was conducted in 2002 by (Immaculate Heart of Mary Sister) Anne Munley under the auspices of the Leadership Conference of Women Religious,” and was just a follow-up to a 1991 report on the topic.

The study’s executive summary also called for more research on sisters in the Southwest, where women religious have had a long-standing presence and where the Catholic population has increased dramatically; the reasons women give for not entering religious life; and the best practices for women’s religious orders to transmit their charism to lay partners.

Key findings of the report and informational and promotional materials on religious life are available at the website WeAreSisters.net, which is hosted by NationalCatholicSistersWeek.org.

NEXT: Muslim leaders say ‘no justification’ for terror exists in true Islam