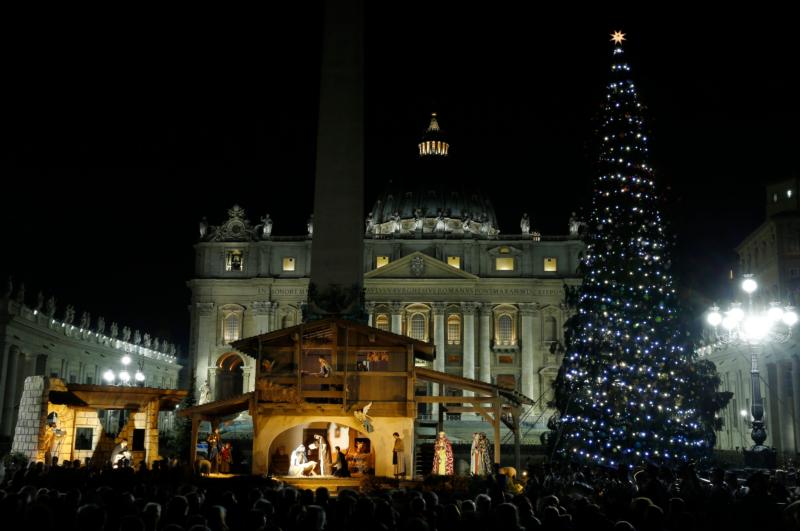 VATICAN CITY (CNS) — Seeing baby Jesus in the Nativity scene reminds people that Christ uses humility and love to save the world, not impressive force or a magic wand, Pope Francis said.

“God does not love powerful people’s imposing revolutions in history, and he doesn’t use a magic wand for changing the situation,” he said Dec. 18, meeting the people who donated the centerpieces of the Vatican Christmas decorations in St. Peter’s Square.

“Instead, he makes himself small, he becomes a baby, in order to draw us in with love, in order to touch our hearts with his humble goodness, in order to shake up those who race to accumulate the false treasure of this world,” he said.

The northern Italian province of Trent donated the life-sized Nativity scene, and three small towns in Germany’s Bavaria region donated the 82-foot spruce fir. The tree was lit and the scene officially unveiled during an early evening ceremony in the square Dec. 18.

The painted ceramic tree ornaments were made by child cancer patients from a number of Italian hospitals.

The pope thanked the “tiny artists” who created the decorations and congratulated them for being so young and yet already having their art work showcased in St. Peter’s Square.

“Keep going! That’s how Michelangelo got his start,” he said.

The birth of baby Jesus in Bethlehem shows that God didn’t “simply appear on earth” just to come and go, but that “he came to share in our life and embrace our desires.”

He came “because he wanted to and still wants to live here, together with us and for us,” the pope said. “Because of his great mercy, he came down to us in order to stay permanently with us.”

He asked the children always to remember that the Nativity scene also shows that God “does not impose with force.”

“In order to save us, he didn’t change history performing a grandiose miracle. Instead, he came with great simplicity, humility, meekness.”

NEXT: Pope Francis praises road map for peace in Syria