Photographs at a funeral 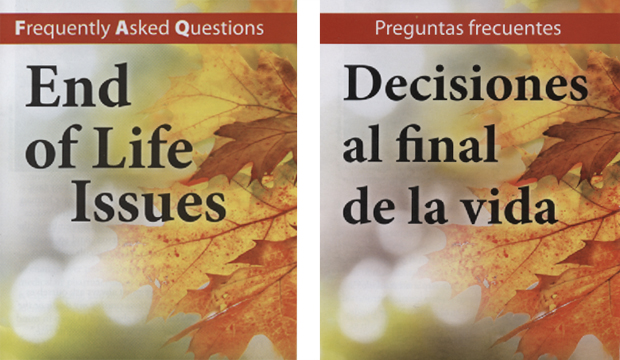 Last week I attended the funeral of a man I didn’t know. He was the brother of a friend, and I wanted to pay my respects to him and his family.

As I stood in the long receiving line at the viewing, I looked at photographs displayed on easels that showed scenes of the man’s life through the years: teaching his son how to tie a fishing lure, smiling with his daughter at her school’s father-daughter dance, smoking cigars with his buddies, laughing with his wife countless times over the years.

They were vignettes of a man I wish I had known. He had lived well, it seemed to me, loved by his family and a great many people in his town and his church.

I didn’t know exactly how he had died, except that it was cancer. Had he suffered? Probably. I can guess at the family’s pain too, watching a strong and proud man succumb.

How prepared were they for his death when it came? A small pamphlet I’d seen earlier that day suggested that at the very least, the family need not have faced the hardest questions alone: How much must he suffer? When do we let him go?

(Published by Our Sunday Visitor and written by Steven Bozza of the Archdiocese of Philadelphia, the brochure is available in bulk quantities for parishes; call 800-348-2440 to order.)

The four-fold document briefly explains facets of Catholic medical ethics such as how and when to call for appropriate pain management, ordinary and extraordinary medical treatments, and giving a terminally ill person food and water.

It also addresses how to determine when medical treatment would be futile, and the withholding and withdrawal of treatment.

It concludes with information to consider before a loved one, or oneself, becomes seriously ill or injured. A section spells out the benefit of writing advance directives to help “construct a living will that reflects Catholic moral teaching,” according to the pamphlet.

That teaching can help navigate some persuasive voices that tell us the life of our parent or sibling or spouse should be extended indefinitely by every means possible, or ended quickly using every bit of technology at our disposal.

Whether it’s using machines that keep a person alive even after brain activity has long ceased or assisting him or her with suicide, there is a temptation to avoid the truth of our dignity as children of God and stewards of life, not its owners.

We are created “in God’s image.” That means we are loved into being by him, and we carry the dignity he gave us right until our natural end. When we assist someone with effective pain management and wise decision making based on the truth of our God-given life and dignity, we allow our family members and friends to die when death comes naturally; we never impose it.

Death, of course, is inescapable. But it also is not the end. Christianity’s central belief in the resurrection of Jesus means death is a transition to eternal life in Christ. That belief is what helps makes sense of death and all the moments of life. Not only our own life but the lives of men and women we might have known, beyond the photographs at their funeral.

And while I am alive, I am going to get to know someone a little better by giving the only thing I have: my time today.

PREVIOUS: In life as in the kitchen, it’s all gravy

NEXT: A difference of 18 human lives, and many more