A faster, easier and free path to healing after divorce 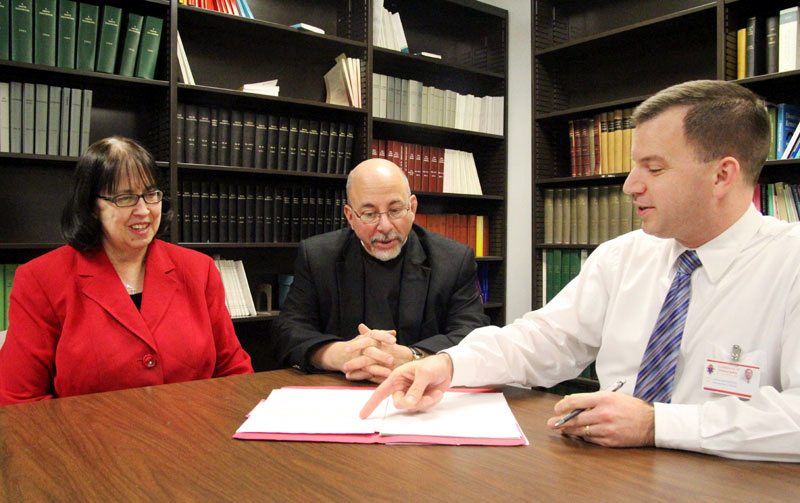 Last December the Catholic Church made it easier for Catholics around the world to find healing after a failed marriage.

Now in the Archdiocese of Philadelphia, the process to receive a marriage annulment has become easier, shorter and cheaper – free of charge, in fact.

Pope Francis last fall called for changes in the process by which a Catholic may seek an annulment, technically a declaration of nullity. The changes (see the pope’s document here) took effect Dec. 8, 2015, and local church marriage tribunals have since been implementing them.

The top judge in the Philadelphia Archdiocese’s Metropolitan Tribunal, judicial vicar Msgr. Paul DiGirolamo, leads the efforts to help Catholics through the process to obtain an annulment.

He explained in a recent interview at the tribunal in the Archdiocesan Pastoral Center in Philadelphia that Catholics whose marriage ended in divorce for whatever reasons may receive holy Communion at Mass and other sacraments.

It is only when they wish to remarry that the circumstances of their first marriage must be examined. The reason is that while the Catholic Church teaches that marriage is a permanent, indissoluble union, some marriages do end in divorce.

With respect to that teaching, then, a church legal process tries to determine if the marriage that was presumed to be valid had some defect right from its beginning that precluded a true bond, in keeping with what the church teaches and society has traditionally believed about marriage.

Several changes to that process called for by the pope include:

* Opening a “short process” whereby if both parties from a divorced marriage are in agreement, the bishop of a diocese may grant an annulment quickly, in about four months. In most dioceses in the developed world, including in the United States and about 30 countries, the ordinary process takes about five to eight months.

* Costs for the legal process, while never exorbitant at around $800 per case, have been eliminated. “The Holy Father asked to take away the expenses, for the local church to assume the expenses, and (Archbishop Charles Chaput) has done that” in Philadelphia, said Msgr. DiGirolamo.

* Adding to the speed of obtaining an annulment is that the forms for starting the process in the archdiocese are computerized, available with much background information online here. Also, the previous practice of a diocesan court sending every case to a second court for review – for instance, Philadelphia’s cases were sent to the Archdiocese of Baltimore for review – has been eliminated, further speeding the process, Msgr. DiGirolamo said.

* The real innovation in the changes, from his perspective, “is a jurisdictional issue.” Previously, if the person seeking an annulment was married in a country or diocese other than where she lives now, the diocese of her new home could not accept the case because the marriage was out of its jurisdiction. Now that new diocese may accept the case. “The law recognizes modern mobile society where people don’t stay in one area their whole lifetime,” Msgr. DiGirolamo said. “Anyone can start a case in their local diocese even if the marriage took place in another country or if a party to the marriage also lives in another country. People from all over the world find themselves here.”

What the process seeks

A declaration of nullity, or annulment, does not deny that there was a marriage or that any children that resulted were somehow illegitimate, but that there were serious impediments which prevented a bond that could rightly be called a marriage.

Msgr. DiGirolamo explained how the legal process of gathering testimony from the person seeking the annulment (technically, “the petitioner”), the ex-spouse (respondent) and other witnesses such as family members and friends attempts to assess how one or both parties in the former marriage were lacking in three areas: intention, understanding or ability.

On the first point, did the couple not intend for the marriage to be permanent; did they not expect to be faithful to their vow; or that children were to be welcomed?

Did they understand what marriage is – “a community of life, an intimate interpersonal relationship ordered toward the mutual growth of the parties, and children,” Msgr. DiGirolamo said.

Regarding the ability of the couple, there are “questions of a psychic nature, that would prevent people from entering into the community of life,” he said.

All these characteristics were “presumed to be present but might not have been, had questions been delved into at the time,” he said.

One of the parties in the marriage might have seen one or more of these defects while engaged but perhaps thought, “maybe marriage will change them, or I can change them,” Msgr. DiGirolamo said of responses he sees in some testimony.

“Some of this is through no fault of their own, and some of it, it is,” he said, recalling that some brides-to-be have admitted, “‘Everyone told me I shouldn’t marry him but we had already spent the money and it was too late,’ or ‘I don’t want to upset my parents.’”

To help in healing and growth

The Philadelphia tribunal receives 400 to 500 annulment cases each year and most receive the declaration of nullity, allowing the parties to remarry validly in the church.

The testimonies produced through the process are essential not only for making a decision in each case, but to aid in healing of the persons involved.

“One would hope they are gaining a better understanding of what the marital situation was so that they can learn from that, perhaps to grow and mature and not repeat some of the mistakes,” Msgr. DiGirolamo said. “Sometimes people enter into marriage with problems not of their own fault, and we need to learn to grow from that to evaluate what happened and why, and what can we learn to get better?”

An investigation into those problems suggests an even greater necessity for diligent and honest marriage preparation long before an engaged couple walks down the aisle.

PREVIOUS: Pro-lifers plow ahead with plans to march in D.C.

NEXT: Go to Mass if you can, pray at home if you can’t