Pro-lifers plow ahead with plans to march in D.C. 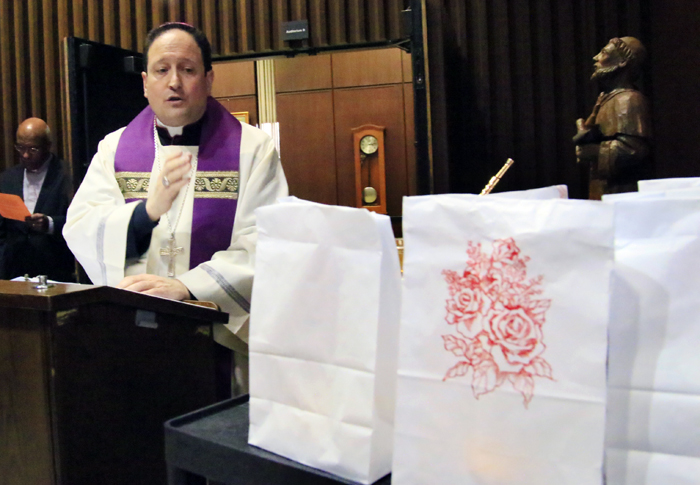 Auxiliary Bishop of Philadelphia John McIntyre blesses luminaries to be placed outside the Archdiocesan Pastoral Center in Philadelphia to remind passersby of the sanctity of life on the eve of the March for Life in Washington, D.C. (Photo by Sarah Webb) 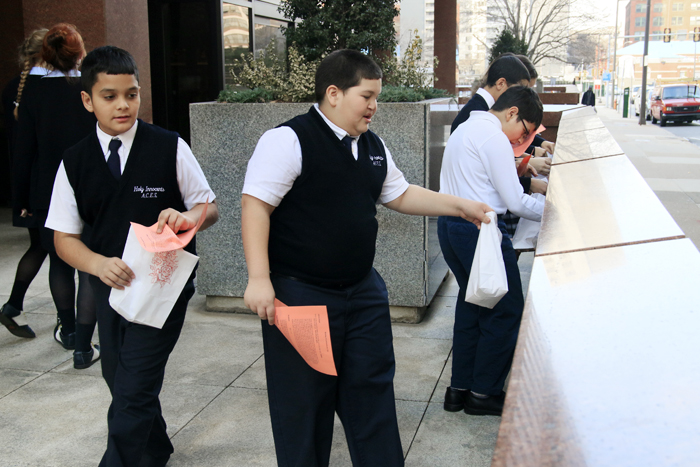 Despite the foot of snow expected to fall on Philadelphia Friday night into Saturday, and up to two feet anticipated for the Washington, D.C. area, the annual March for Life in the nation’s capital has not been postponed or cancelled.

Marchers from across the country gather each year for a rally near the Washington Monument then march from there past the U.S. Capitol and on to the Supreme Court building.

Auxiliary Bishop of Philadelphia John J. McIntyre will lead the Philadelphia contingent traveling by bus, train and car to Washington. Hundreds of parishioners, clergy and religious from the Philadelphia Archdiocese normally travel each year for the march.

Dubbed Winter Storm Jonas, some 74 million Americans from Nebraska to New York City will be affected by blizzard conditions of the mammoth storm.

Some diocesan groups including Cincinnati, St. Louis and in Virginia, Indiana and Michigan have already cancelled their trips to Washington due to the storm. While the Philadelphia Archdiocese indicated no change in plans, as of Thursday several parish and school groups had cancelled their participation.

The National Weather Service has issued a blizzard warning (upgraded from a watch) for the Baltimore/Washington/Northern Virginia area beginning 3 p.m. Friday – about the time the March for Life usually ends.

The bulletin said heavy snow – 24 inches in Washington and 30 inches in the western suburbs — will develop late Friday afternoon and continue through Saturday night in that region, with “potential life threatening conditions expected Friday night through Saturday.”

The snow driven by sustained winds of 25 to 35 m.p.h., with gusts up to 50 m.p.h., “will cause dangerous conditions and will be a threat to life and property,” the weather service said. “Travel is expected to be severely limited if not impossible during the height of the storm Friday night and Saturday. Visibility will be reduced to near zero at times in whiteout conditions.”

Philadelphians and all participants are invited to a vigil Mass at the Basilica of the National Shrine of the Immaculate Conception in Washington on Thursday night, Jan. 21, from 5:30 to 7:30 p.m., with New York Cardinal Timothy Dolan as celebrant.

Bishop McIntyre will celebrate Mass at the shrine Friday morning at 10 a.m. for the approximately 3,000 anticipated faithful from the Archdiocese of Philadelphia attending the march.

A rally preceding the march will begin at 12 noon with speeches on the grounds of the Washington Monument near the corner of 15th Street and Constitution Avenue. At 1 p.m. marchers will start out from Constitution Avenue between 15th and 17th Streets.

See an interactive map of the walking route here.

Participants from the Philadelphia Archdiocese will meet on the corner of Constitution Avenue and 15th Street. They are invited to walk behind the Archdiocese of Philadelphia’s banner, carried by seminarians from St. Charles Borromeo Seminary.

The march ends at approximately 3 p.m. at the Supreme Court, located about three blocks from Amtrak’s Union Station in Washington.

In addition to the rally and march, organizers will present their inaugural March for Life Achievement Award to Chester County Republican U.S. Rep. Joe Pitts, who is retiring after 20 years in Congress.

NEXT: A faster, easier and free path to healing after divorce