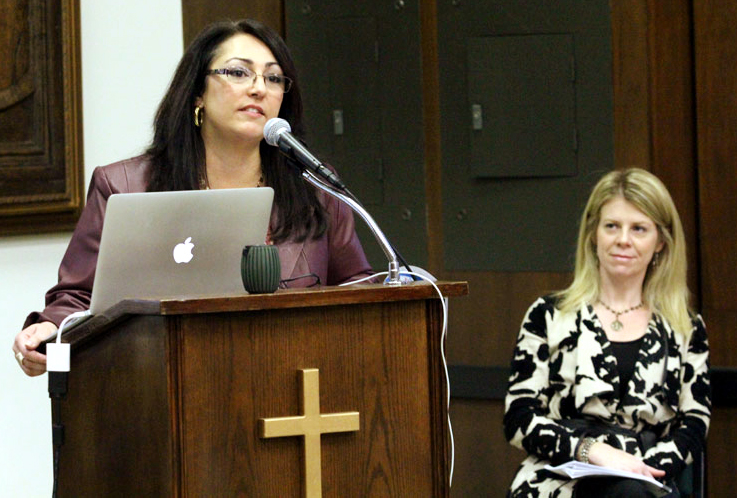 Maria Malone (left) and Jenny Galiani, co-founders of Adoption is a Loving Option, speak on the process of adoption at the Pro-Life Summit in Philadelphia. (Photos by Sarah Webb)

As a prelude to the Friday, Jan. 22 annual observance of the 1973 Roe v. Wade U.S. Supreme Court decision legalizing abortion, Philadelphia’s pro-life community began a week of activities with a 9 a.m. Saturday, Jan. 16 morning Mass at the Chapel of the Cathedral Basilica of SS. Peter and Paul, followed by an educational gathering focused on the topic of adoption.

The Pro-Life Summit meeting “Celebrating Family” was sponsored by the archdiocesan Office for Life and Family at the adjoining Archdiocesan Pastoral Center. A number of the participants got an earlier start through a pro-life witness at the Planned Parenthood Center at 12th and Locust Streets, Philadelphia.

“I think it is great talking about adoption,” said Patrick Stanton, a pro-life advocate who is continuing a family tradition begun by his late father, abortion foe John Stanton.

“We saw 30 little girls going into an abortion clinic this morning,” Stanton said. “If we could only connect to the families wanting to adopt, it would be a home run.”

Stanton doesn’t just talk, he acts. He and his wife already were parents of seven children when they two adopted more, then 15 and 9 years of age; now they are 21 and 25. The younger child was adopted from Mexico because local agencies would not give a child to so large a family.

“We were happy to have the extra children,” Stanton said.

The Mass was celebrated by Father Kenneth Brabazon, who stressed the gravity that the church places on the sin of abortion, but nonetheless offers healing. He noted that in church law forgiveness after the confession of abortion is normally reserved to bishops.

But in many dioceses, including Philadelphia, the faculty to forgive after abortion is extended to all of their priests. Pope Francis during this Jubilee Year of Mercy has given the faculty to all priests worldwide.

Because of the pope’s action, “many have approached the confessional,” Father Brabazon said. “Much is accomplished through prayer and God’s mercy.”

Noticeable at the Mass was a group of 15 young teens, all students at Mercy Vocational School who will be part of their school’s contingent at the Friday, Jan. 22 March for Life in Washington.

“I’m against abortion. I think it is wrong for any child to be aborted,” said Mercy student Gabrielle Edwards who will be travelling to Washington for her second time at the march.

Jenny Galiani and Maria Malone, the co-founders of Adoption as a Loving Option, were the presenters at the program that followed.

All were adopted as infants through agencies directly from the mothers; some are open adoptions where the mothers still maintain contact. In these cases the adopting family pays the expenses, and although all of the children were American-born, they come from around the country.

Galiani and Malone both speak to various schools including high school classes explaining the different types of adoption and the distinction between foster care and adoption.

Only about two percent of the children conceived in an unwanted pregnancy are adopted, according to Malone, and many of the rest are aborted. “We want to give a voice to unborn children through educating people about adoption,” she said.

One advocate for life at the conference, Loretta Graham, who previously had a pro-life radio program, was an unadopted baby who was born at St. Vincent Hospital.

“My mother left me there and I was a ward of Catholic Charities my whole childhood,” she said. “I was at St. Vincent’s Home and in foster care. I had a wonderful foster mother. When I was at West Catholic High School I volunteered at St. Vincent’s. I was in Our Mother of Sorrows Parish where Father (James) Daly was a saint and a real father to us. I got married in 1972 and am still married.”