Religious educators representing only a fraction of the parish-based PREP programs in the Philadelphia Archdiocese still filled the cathedral on Sunday, Jan. 17 for a Mass recognizing the anniversaries of teaching service. (Photo by Sarah Webb)

In remarks before the annual Mass and Award Ceremony for Parish Religious Education Programs held at the Cathedral Basilica of SS. Peter and Paul on Sunday, Jan. 17, Ann Menna, archdiocesan director for Parish Elementary Education, estimated the honorees at the ceremony had over 2,500 years of service in total.

That was true enough but it isn’t the whole story, considering less than a third of the parishes (only six from Philadelphia itself) sent their catechists who were celebrating a significant anniversary of service (five, 10, 15, 20, 25 and 30 years) to be honored. But that’s just as well.

The cathedral was packed anyway with the 248 awardees and their family and friends. If all parishes participated there isn’t a church in Philadelphia that could hold them.

(See our photo gallery from the Mass here.)

Bishop Michael Fitzgerald, who oversees Catholic education in the archdiocese, presided at both the Mass and the award ceremony. The Gospel narrative was about the first public miracle of Jesus at the wedding feast in Cana, and the responsorial psalm was, “Proclaim his marvelous deeds to all the nations.”

Bishop Fitzgerald tied both in very nicely to the occasion, as he complimented the religious educators for their role in spreading that message.

“Sometimes when we think about Catholic education we think about schools, and while they have been an important part of our ministry, the work of parish religious educators has been no less important,” he said. “The work that you do and the work your families have supported in our parishes for our young people has been one of the great gifts of the history of this wonderful archdiocese.”

In addition to the catechist awards, special awards were given to directors, coordinators and administrators of religious education celebrating 10, 20 or 25 years of service. 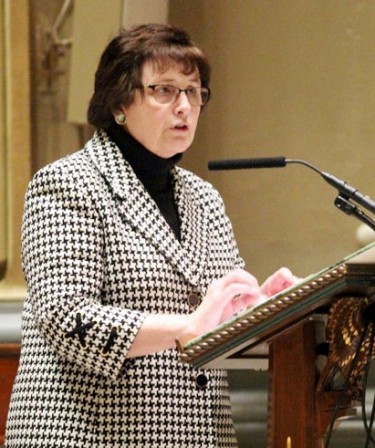 Ann Menna, deputy secretary for catechetical formation in the Archdiocese of Philadelphia, presents each awardee in the Cathedral Basilica of SS. Peter Paul on Sunday, Jan. 17. (Sarah Webb)

When then-Father Depman was assigned to minister to the immigrant Hispanics and their children in the area in 1990, the Sisters Servants of the Immaculate Heart of Mary showed him the ropes. There were only about 20 children from the surrounding area in the religious education program, now there are an astonishing 1,500.

In 1996 a second congregation, the Sisters Servants of the Lord and the Virgin of Matara, originally from Argentina, joined the ministry. St. Rocco Parish was founded in 2010 as the first Hispanic parish in the archdiocese. A key to the growth is that Msgr. Depman and the Sisters don’t just sit around waiting for kids to come to CCD (PREP). Very early on he purchased a bus and began picking students up at their schools, bringing them to religious education then driving them home. Now it’s a fleet of buses and there is PREP four days a week.

“I didn’t think I would be spending the last 25 years in the seat of a bus,” he said. “It’s not just myself, it’s the sisters and the lay catechists.”

While most of the rest of the awardees would not have as colorful a story, their dedication is just as deep.

Ross Trimboli has been teaching PREP at Blessed Virgin Mary Parish in Darby for 30 years. He keeps at it although he has moved away. “That is where I was confirmed and made my first Communion,” he said. “I’m compelled to do it. It is something I am meant to do.”

Nichole Stolarski was awarded for five years of service at Our Lady of the Sacred Heart, Hilltown. She does it because she believes it is important for children to have God in their life. “Actually I joined to teach my children in CCD,” she said. “One is now out and two are still in it.”

Very clearly, based on this service there may be a shortage of workers in the vineyard on the clerical and vowed religious level, but the laity are filling in quite nicely.

NEXT: Area pro-lifers meet to study adoption as loving option