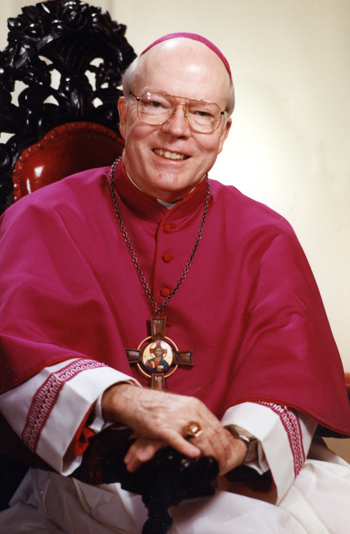 Retired Archbishop Francis B. Schulte, who served as the 12th archbishop of New Orleans from 1988 to 2002, died Jan. 17 at age 89 after several weeks in hospice care at Mercy Fitzgerald Hospital in Darby, Pa. He is pictured in a photo at the time of his ordination as bishop in 1981 in Philadelphia. (CNS files)

Archbishop Francis Bible Schulte, 89, a Philadelphia priest who rose to be superintendent of schools, auxiliary bishop of Philadelphia, bishop of Wheeling-Charleston (West Virginia) and archbishop and archbishop emeritus of New Orleans, died at Mercy Fitzgerald Hospital, Darby, on Sunday, Jan. 17.

A Philadelphia Mass in memory of Archbishop Schulte will be celebrated by Archbishop Charles J. Chaput on Monday, Jan. 25 at the Cathedral Basilica of SS. Peter and Paul.

Reception of the Body will be held at 9 a.m. followed by a viewing. The Mass will follow at 11 a.m.

Archbishop Schulte was born in Philadelphia during the Christmas season in 1926, the only child of Francis Schulte, a pharmacist, and Katherine Bible Schulte, a nurse. Although his birthdate was Dec. 23, his parents told him it was Dec. 25. He did not discover his real birthdate until he had to obtain a birth certificate to enter St. Charles Borromeo Seminary.

“Oh dear, your father and I talked it over and thought it would be nice,” his mother confessed. He probably agreed because he continued to use the Dec. 25 birthdate until he left Philadelphia for Wheeling in 1985.

His heritage was German on his father’s side, Irish on his mother’s side, but “you’re 100 percent Irish if your mother is Irish,” his maternal grandmother assured him. That may be, but his priestly DNA came through the paternal line, although his mother’s sister was a Sister of St. Joseph.

His great uncle Augustine Schulte was a rector at the North American College in Rome and professor at St. Charles Borromeo Seminary; his uncle, also Augustine Schulte, was pastor of St. John Vianney Parish, Gladwyne.

Raised in St. Benedict and Holy Angels Parishes, he was schooled at Norwood Academy and St. Joseph’s Preparatory School. From an early age he considered the priesthood, but it was the death of his father on New Year’s Day, 1938, when he was 11 that his intent was solidified.

Grief stricken he went to pray at the nearby Carmelite Monastery. There he poured his grief out at a shrine to St. Therese of Lisieux. “I’m convinced that was where the Lord called me,” he recalled in a 2006 interview.

After St. Joseph’s Prep he entered St. Charles Borromeo Seminary and was ordained May 10, 1952 by Archbishop John F. O’Hara, who was in his first year as Philadelphia’s ordinary. Although dwindling today, Archbishop Schulte’s ordination class was and remains a remarkably close-knit class.

Bishop Louis A. DeSimone was also a member of the class and the eldest because he was a World War II veteran.

“From the first we were very close to each other,” he said.  “When Francis Schulte became an ordinary he would invite us first to Wheeling and then to New Orleans because he wanted us to be together. He wasn’t a flashy person but he had much wisdom. He was a humble priest who loved to celebrate Mass and he did it with humility.”

Ministry as a young priest

“I call these my Camelot years,” Archbishop Schulte would later say. “Both schools were excellent.”

During part of this period he was in residence at the former St. Stephen Parish on North Broad Street. Also there was Father (now Bishop) Robert Maginnis, who was assistant director for the Department of Youth Activities. The two became friends and often, after morning Mass, they would go to Pier One for a bit of tennis, then shower and head into their center city offices.

“We became good friends,” Bishop Maginnis recalls. “He was extremely brilliant but a very simple priest who never acted haughty or more intelligent than anybody else. He was a common-sense city boy.”

Interestingly, although working in education, it was not a career path he would have deliberately chosen. In post-ordination graduate studies at the University of Pennsylvania he opted for political science and labor relations, something that did help in in school administration.

“You went to St. Joseph’s Prep, why didn’t you become a Jesuit?” Cardinal Krol asked him during an automobile ride. “Because I didn’t want to be a teacher,” he replied.

The cardinal, dumbfounded, said nothing. A few months later he was named pastor of St. Margaret in Narberth and he loved it.

An auxiliary bishop, then off to West Virginia

It wasn’t very long after this that Cardinal Krol invited Msgr. Schulte, Msgr. DeSimone and Msgr. John Foley to his residence and dinner with a special guest, Archbishop Pio Laghi, the papal nuncio. They may not have been aware of it at the time but it was apparently a screen test.

In August 1981, Pope John Paul II named Msgr. Schulte and Msgr. DeSimone bishops and appointed them auxiliary bishops for the Archdiocese of Philadelphia. Their episcopal ordination took place at the Cathedral Basilica of SS. Peter and Paul with Cardinal Krol as the ordaining prelate.

Msgr. Foley would have to wait a few years longer; in 1984 he was named archbishop and appointed to head the Pontifical Council for Social Communications at the Vatican.

While keeping the pastorship of St. Margaret, which he really loved, Bishop Schulte picked up new responsibilities including the chairmanship of the Cardinal’s Commission on Human Relations and Urban Ministries, which was a very major outreach program during Cardinal Krol’s administration.

His tenure as an auxiliary bishop was short. In less than four years, in July 1985 he was appointed sixth bishop of Wheeling-Charleston, West Virginia.

His new diocese covered the entire state of West Virginia, and while it was geographically 10 times as large as the Archdiocese of Philadelphia, the Catholic population was less than 100,000 and one-tenth the size of his home diocese.

“The pope must have a sense of humor sending a city boy to such a rural area,” Archbishop Schulte later remarked.

West Virginia was very beautiful but with an enormous amount of poverty. Because the state is heavily Protestant, Bishop Schulte found himself working closely with his counterparts of other faiths, especially the Methodist, Episcopal and Lutheran bishops. “We referred to ourselves as ‘the gang of four,’” Archbishop Schulte later recalled. “We published a joint pastoral letter, ‘This Land is Home to Me.’”

He also came to appreciate the special gifts of southern and rural America. “People came to church early and stayed late and the Catholics of West Virginia understood stewardship,” he later said.

His stewardship was relatively brief in West Virginia. In February 1989 Pope John Paul II appointed him Archbishop of New Orleans, the 12th archbishop of that historic see.

Organization and education in New Orleans

As the archbishop of a major diocese Archbishop Schulte served on many boards, but one of which he was most fond was the Catholic Near East Welfare Association, a papal agency that assists Christians in the Holy Land. He remained on the board of directors for over two decades, according to Michael J.L. La Civita, the organization’s communications director.

“He was long concerned for Christians in the East and particularly in their Catholic education,” La Civita said. “He was a great and loving man.”

Archbishop Schulte served the people of New Orleans well until his January 2002 retirement.

Archbishop Hughes said his predecessor “also was committed to Catholic education, especially Catholic school education. That was a significant part of his priestly life and ministry when he was in Philadelphia and he brought an appreciation of that to New Orleans and did everything he could to strengthen the schools.”

After his retirement Archbishop Schulte returned to Philadelphia for medical care and up until four years ago lived with his old friend Bishop Maginnis at St. Edmond’s Home for Children. Most recently, as his health deteriorated, he resided at Villa St. Joseph in Darby, the archdiocesan residence for retired priests.

“I think he brought a real fidelity to church teaching,” said New Orleans’ current ordinary, Archbishop Gregory Aymond, who served as an auxiliary bishop with Archbishop Schulte. “He also brought a sense of pastoral care. He was very committed to Catholic education since he had been a superintendent in Philadelphia and knew a lot about it. He also helped to stabilize the finances in our archdiocese. He redid the structure of our administrative offices. That was something that was needed, and I thought he did it very well.”

In lieu of flowers in remembrance of Archbishop Schulte, donations are requested for Villa St. Joseph,  1436 Lansdowne Avenue, Darby, PA 19023-1298.

PREVIOUS: Car used by Pope Francis in Phila. to be auctioned, will benefit church ministries

NEXT: Pro-lifers plow ahead with plans to march in D.C.