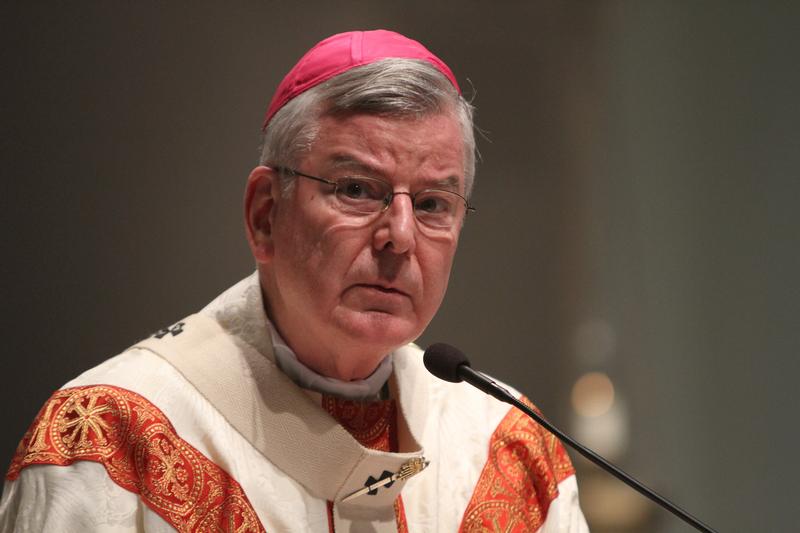 Archbishop John C. Nienstedt is pictured in a May 12 photo. Ten days after the Archdiocese of St. Paul and Minneapolis was criminally charged with failing to protect children, Pope Francis accepted the archbishop's resignation and that of Auxiliary Bishop Lee A. Piche. (CNS photo/Dave Hrbacek, The Catholic Spirit)

ST. PAUL, Minn. (CNS) — Following complaints by some Catholics and leaders of an organization for victims of clergy sexual abuse, Archbishop John C. Nienstedt is leaving a temporary position with a parish in Battle Creek, Michigan, the parish’s pastor announced in a Jan. 21 letter.

“After discussion with the archbishop conveying the expressed concerns by the faithful people of our community, he offered to withdraw from the diocese and I agreed,” wrote Father John Fleckenstein, pastor of St. Philip Catholic Church in Battle Creek, to the area’s Catholics.

“Archbishop Nienstedt has a deep concern for the church, and in light of the unintended discord that his presence was causing, he decided that this would be the best course of action so the church can remain focused on its mission,” the priest added.

Father Fleckenstein announced Archbishop Nienstedt’s arrival to the parish Jan. 10 in his parish’s bulletin. He noted that the archbishop would be assisting him with some pastoral ministries for about six months, which would allow the pastor to complete projects for the Diocese of Kalamazoo and attend to some health issues. He said he has known Archbishop Nienstedt for 20 years, since the archbishop was pastor of a parish in Royal Oak, Michigan.

Archbishop Nienstedt resigned as the head of the Archdiocese of St. Paul and Minneapolis in June following the Ramsey County Attorney’s Office’s filing of criminal and civil charges against the archdiocese alleging the archdiocese had not protected children in the case of Curtis Wehmeyer, a former priest. Auxiliary Bishop Lee A. Piche resigned the same day.

On the day of his resignation, Archbishop Nienstedt said he stepped down because his “leadership has unfortunately drawn away from the good works of (Christ’s) church and those who perform them.” He and Bishop Piche both cited the need to resign allow healing to begin in the archdiocese.

Following the announcement that Archbishop Nienstedt would be temporarily assisting Father Fleckenstein, some Battle Creek-area Catholics, as well as leaders of the Survivors Network of Those Abused by Priests, known as SNAP, publicly raised concerns about nature of the criminal and civil charges, as well as an allegation made in 2013 that he had inappropriately touched a boy’s buttocks during a group photo in 2009. Archbishop Nienstedt denied the allegation and stepped aside from ministry while it was investigated.

Ramsey County did not file charges, and the archdiocese’s investigation found the claim to be unsubstantiated.

“A very regrettable circumstance of Archbishop Nienstedt’s presence within our community has been anger and fear,” Father Fleckenstein wrote in the Jan. 21 letter. “I’m proud of the good works of our parishes and our Catholic schools as well as our valuable place in our community. I wish for us to continue growing and striving. My hope is that we can move forward together.”

He said he wished Archbishop Nienstedt well and that “I know many of you do as well.” He also said that the archbishop “shared with me the deep gratitude he has for the hospitality he received from so many of our parishioners.”

In a letter published the same day to the Catholics of his diocese and especially those in Battle Creek, Bishop Paul J. Bradley of Kalamazoo apologized “for the hurt this situation has caused and the fears that have been raised.”

“It would never be my intention to bring harm to our beloved local church. While I am personally convinced that at no time was anyone in danger, I acknowledge the concerns expressed,” he wrote. “I pray that with this matter now resolved, we will all be able to move forward. I want to regain your trust where that has been damaged or lost, and continue to strengthen our local church here in the Diocese of Kalamazoo.”

NEXT: Helping those on the margins implicit in Catholic faith, says bishop