El Paso Mass scrapped, but not papal Mass across border 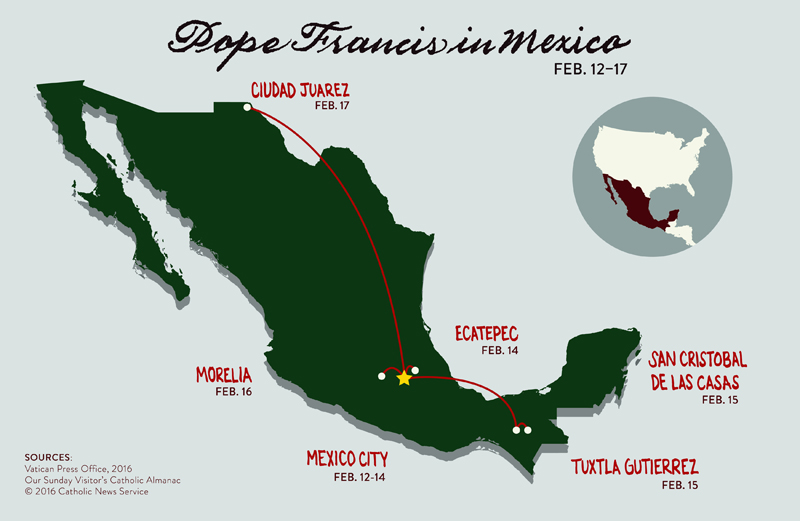 EL PASO, Texas (CNS) — The Diocese of El Paso has scrapped plans for a border Mass that would have taken place at the same time as the closing Mass of Pope Francis’ visit to Mexico in February.

However, the Feb. 17 papal Mass at the fairgrounds in Ciudad Juarez, Mexico, across the border from El Paso, is still going to take place as scheduled.

Elizabeth O’Hara, a spokeswoman for the El Paso Diocese, said security concerns over the size of the anticipated crowd for a U.S.-based Mass taking place at the same time as the Juarez Mass prompted the change in plans.

“The pope is still considered a head of state,” O’Hara told Catholic News Service Jan. 13. The Juarez fairgrounds where the closing Mass of Pope Francis’ Feb. 12-17 visit will be held is about a quarter-mile from the U.S.-Mexico border.

“It became apparent that we didn’t know how many people we could potentially house on the border, which posed a safety risk to those in attendance,” O’Hara added in a Jan. 13 email.

Bishop Mark J. Seitz had announced plans Dec. 12 for a concurrent Mass at the border. However, the diocese has been allotted 5,000 tickets for the Juarez Mass, O’Hara said.

Plans are underway for some kind of substitute event on the U.S. side of the border to mark the papal trip. O’Hara said Bishop Seitz had polled Catholics in the diocese, and many asked for an event at the 45,000-seat Sun Bowl football stadium.

NEXT: Moving to her own rhythm, gymnast defies limits of Down syndrome