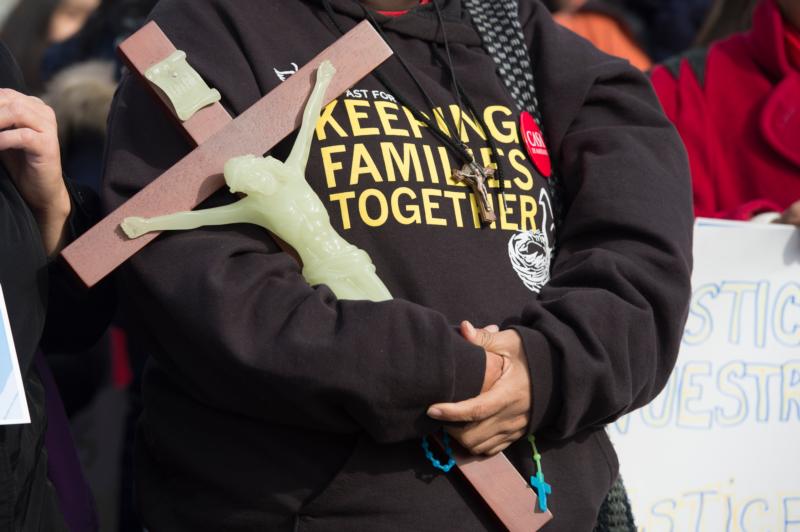 A woman holds a large crucifix during a Jan. 15 immigration rally outside the U.S. Supreme Court in Washington. The Supreme Court Jan. 19 agreed to review President Barack Obama's executive actions to protect from deportation both those who came to the U.S. as children and the immigrant parents of children who are U.S. citizens or legal residents of this country. (CNS photo/Michael Reynolds, EPA)

WASHINGTON (CNS) — The U.S. Supreme Court Jan. 19 agreed to review President Barack Obama’s executive actions to protect from deportation both those who came to the U.S. as children and the immigrant parents of children who are U.S. citizens or legal residents of this country.

“We’re excited and pleased that the Supreme Court will examine the merits of these executive actions,” said Jeanne Atkinson, executive director of the Catholic Legal Immigration Network, known as CLINIC.

“This should be taken as a sign of hope for the estimated 5 million people who stand to benefit from the opportunities presented by DAPA and the expansion of DACA,” she said in a statement.

His actions, which are supported by the U.S. Conference of Catholic Bishops, have yet to be implemented. They were put on hold Nov. 9 by the 5th U.S. Circuit Court of Appeals in New Orleans, which upheld a Texas-based federal judge’s injunction against Obama’s actions.

“Deferred action” would allow millions of immigrants who qualify to continue to work without fear of deportation.

CLINIC, an umbrella organization for Catholic legal services providers, was among 224 organizations that filed a joint brief urging the Supreme Court to take U.S. v. Texas.

The “amicus” or friend-of-the-court brief argued that the sweeping injunction of the U.S. District Court for the Southern District Texas to block the programs directly harms millions of people who have been in the United States since childhood or whose children are citizens or lawful permanent residents.

Oral arguments in the case are scheduled to be heard in April with a decision expected in June.

At a Nov. 20 immigration rights rally in front of the U.S. Supreme Court to mark the first anniversary of Obama’s actions on deferred deportation, Marly Arevalo told Catholic News Service that she was there “fighting for my rights and the rights of others.”

In her first year at Maryland’s Montgomery College, Arevalo said she has lived in the United States for more than six years, since her family’s arrival from Guatemala. She would qualify for DACA, which “would open doors to more jobs, and more scholarships,” she said. After finishing college, she hopes to become a social worker.

Her family left Guatemala “because there were no opportunities to attend school, and there’s a lack of employment. We chose to travel to America, because it opens doors in those areas.”

Despite the political hostility to the proposed executive actions and the appeals court ruling, which could mean eventual deportation, “I’m not fearful,” she said.

NEXT: With new initiative, Knights aim to work more closely with parishes