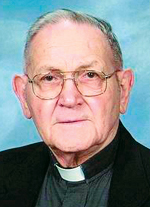 Father George J. Boyle, 90, a former pastor of three parishes, including Sacred Heart Parish in Havertown where he was pastor emeritus, died Jan. 9.

He was ordained May 10, 1952 at the Cathedral of SS. Peter and Paul by Archbishop John F. O’Hara and his first assignment was as parochial vicar at Annunciation Parish, Shenandoah, followed by St. Joseph, Downingtown and Holy Savior, Norristown.

He then served as a teacher and disciplinarian at Bishop Kenrick High School for almost two decades.

Deacon John Suplee, a permanent deacon who was business manager at Sacred Heart, remembers Father Boyle as “low keyed, patient with people and a good priest.”

He was very supportive of Catholic schools, Deacon Suplee said. Also if there were parish social activities, a trip or a show, “he was one of the first to sign up. He was very social.”

This was especially so with his ordination class from St. Charles. There were 30 ordained, and they were especially close, getting together often. Most have died but two of the most distinguished living members of the class are Archbishop Emeritus of New Orleans Francis Schulte and retired Auxiliary Bishop of Philadelphia Louis DeSimone.

“He was a faithful friend and classmate,” said Father William J.J. O’Donnell. “We would try to get together every month and he was one of the fellows at heart. He was straightforward and opinionated, but in a good way.”

Bishop DeSimone remembers Father Boyle as very much part of the group, with the reunions sometimes in Wheeling when Bishop Schulte was bishop there and also in New Orleans where he was archbishop. “The priesthood is that kind of fraternal group,” he said. “We are not just friends, we are brothers in Christ. We miss one another and look forward to when we can all gather together again at the altar of the Lord.”

There will be a viewing for Father Boyle at the Stretch Funeral Home, Havertown, Thursday night Jan. 14, from 6 to 8 p.m. The Reception of the Body will be held Friday, Jan. 15, at 9:30 a.m. followed by a viewing and an 11 a.m. funeral Mass at Sacred Heart Church in Havertown.

The Mass will be celebrated by Auxiliary Bishop Michael J. Fitzgerald. Concelebrants will include Msgrs. Joseph Murray and Ignatius Murray and Msgr. O’Donnell, who will be the homilist.

NEXT: Deacon beloved in black Catholic community and beyond is laid to rest