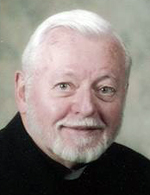 Born in Philadelphia the son of the late Edward T. and Cecelia C. (Kline) Doyne, he attended Most Precious Blood of Our Lord School in North Philadelphia and Roman Catholic High School before entering St. Charles Borromeo Seminary.

He was ordained May 10, 1956 at Immaculate Conception Church in Germantown, Philadelphia, by Archbishop John F. O’Hara and his first assignment was as parochial vicar at St. Mary Parish, St. Clair.

“He was interesting, very well read and a renaissance man; music was his forte,” Father Oswald said. In ministry, “he was attentive to the sick, especially in hospital outreach.”

Doris Duncheskie, outreach coordinator and parish nurse at Holy Martyrs, remembers Father Doyne as “a fine priest, very pleasant,” she said. “He was a liturgical person and it was important to him, he tried to bring it up to date.”

In her parish work she dealt with bereaved families, and Father Doyne was very helpful in this.

Yet his time at Holy Martyrs was relatively short. How will people best remember him? “They will remember him with his dog, he loved that dog,” Duncheskie said.

Father Joseph Shenosky got to know Father Doyne while he was a senior priest at St. Stanislaus. He also considered him a renaissance man, because his diverse interests and general knowledge of culture, the arts and literature.

“He was a gifted musician and he even made his own vestments and they were beautiful,” Father Shenosky said. “He was a joyful man and loved being a priest. He was faithful to his prayers, always helpful in confessions and faithfully visited the home-bound, the nursing homes and the hospitals. He was a wonderful example of a priest.”

Father Doyne is survived by nieces and nephews.

NEXT: Retired pastor of 3 archdiocesan parishes dies at 90