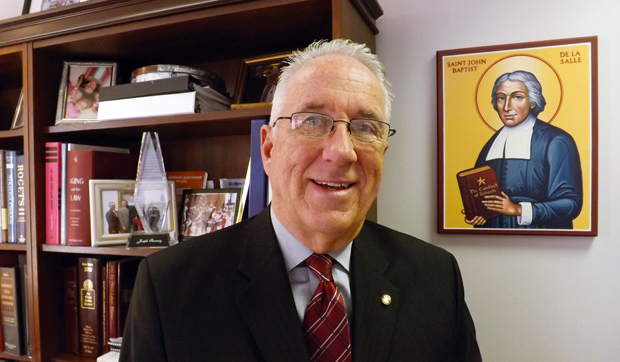 Joseph J. Sweeney Jr., who retired as secretary for Catholic Human Services of the Archdiocese of Philadelphia at the end of 2015.

Joseph J. Sweeney Jr., who retired as secretary for Catholic Human Services for the Archdiocese of Philadelphia at year’s end, has had quite a run. He served the archdiocese for more than 30 years beginning as finance director at St. Francis Country House, Darby, after leaving a promising career at Gulf Oil Co.

Looking back, he said, “There were so many wonderful people, the employees, the volunteers and all of the people who love the church and appreciate what we do, what the church does.”

His own early life was spent mostly in Philadelphia’s Olney section at St. Helena School followed by nearby Cardinal Dougherty High.

For college he chose La Salle and did it the hard way — though night school, graduating in 1971. Meanwhile he worked for Gulf Oil on City Line Avenue in marketing and finance. It wasn’t the business skills acquired at La Salle that most impressed him.

“I always make reference to De La Salle and the Christian Brothers and what they instill in you,” he said.

Meanwhile, he’d met his future bride, Agnes Schmitt, and when they married in 1969 he was 23 and she was just short of 21, too young to drink on their honeymoon.

Over time they would have five children, Joseph III, Jennifer, Matthew Sean, Megan and Cara.

There were already two little ones when Gulf transferred him to Pittsburgh and also encouraged him to obtain a graduate degree. At Duquesne University he was accepted at both the law school and the business school, and when he asked at Gulf which they would prefer, they told him it didn’t matter, they just wanted their employees to improve themselves and be well-rounded. He opted for an MBA.

In 1985, faced with another transfer, this time to Houston, he opted instead to return to the Philadelphia area and what would become his true vocation when he encountered St. Francis Country House, which was until recently an archdiocesan nursing home.

Even though his official duties were as director of finance and assistant administrator for support services and finance, it was interaction with the residents, their family members and the caring staff that got to him.

“When you come in every day and walk around you fall in love with the residents,” Sweeney said. “We were taking care of God’s children, the oldest of his living children. I realized it was an opportunity to do something important and to do good.”

Over time he rose to CEO of archdiocesan Catholic Health Care Services and in 2008 was named the first lay secretary for Catholic Human Services with oversight of all of the Catholic social service and health care ministries for the Archdiocese of Philadelphia.

Part of his daily routine was to attend Mass, walking from his office at 222 North 17th Street in center city to the adjacent Cathedral Basilica of SS. Peter and Paul.

“I was always a solid Catholic but here I was 50 yards away from the mother church of the archdiocese,” he said. “Every time I go to Mass it strengthens my faith.”

Strength is certainly needed. Although the delivery of health care services and social services are not as faith-based as they once were, Sweeney was still overseeing a system with 2,300 employees — a huge task.

“People would call and say, ‘I need help for my mom,’” he said. “I would connect them to the people who could help them. I couldn’t walk into every room in every one of our facilities, or a hospice or nursing home to take care of their needs, but I know our employees and I know they are taking care of all of their needs.

“I try to make sure the employees know how valued they are for the work they do and for who they are.”

Now that he’s retiring there will be more home time, especially with the grandkids, and maybe a bit of travel. There are so many places he and Agnes have yet to see.

But looking back he said in a farewell letter to his many colleagues in social services, “Working for the church has been one of the best decisions in my life, and leading Catholic Social Services was truly the job of a lifetime.

“It enabled me to put into action the values, example and guidance given to me by the Christian Brothers at La Salle University. I leave knowing the job is never done; there will always be more good work to do, more people to serve. Personally I got so much more out of this job than I gave.”

PREVIOUS: Malvern Retreat chief steps down, but not out of Catholic life

NEXT: In rapidly changing field, he keeps Catholic identity constant