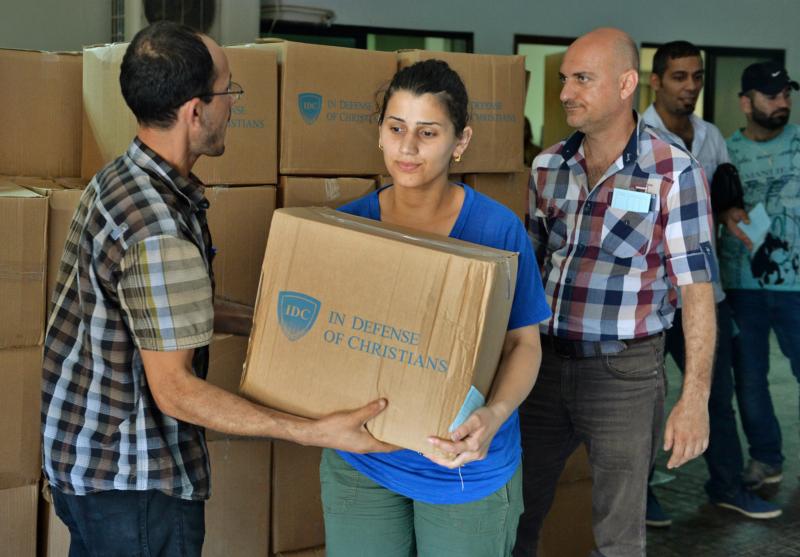 An Iraqi Chaldean Catholic receives humanitarian aid in 2015 in Beirut. Iraq's Chaldean Catholic patriarch said increasing incidents of discrimination against Christians in Iraqi society were inciting fear and causing an exodus of Christians from their homeland. (CNS photo/Wael hamzeh, EPA)

MARRAKESH, Morocco (CNS) — Iraq’s Chaldean Catholic patriarch said increasing incidents of discrimination against Christians in Iraqi society were inciting fear and causing an exodus of Christians from their homeland.

In a speech circulated at a conference on the rights of religious minorities in the Muslim world, Chaldean Catholic Patriarch Louis Sako of Baghdad cited Muslim contractors refusing to build homes, monasteries, etc., for Christians, whom they identify as infidels; the display of posters, even in public offices, asking Christian girls to wear a veil, following the example of Mary; a judge in Baghdad who dismissed a Christian from court, claiming that Christians are not accepted as witnesses in Iraqi courts; and militias in Baghdad who confiscated homes, lands and other properties of Christians.

Because of visa issues, Patriarch Sako was unable to attend the Jan. 25-27 conference in Marrakesh. The conference, which included Muslim leaders from more than 120 countries as well as non-Muslim observers, was held under the auspices of King Mohammed VI of Morocco and was organized by the country’s Ministry of Endowment and Islamic Affairs and the Forum for Promoting Peace in Muslim Societies, based in United Arab Emirates.

In his written text, Patriarch Sako said the current “miserable situation” in Iraq was due to the “intervention of external ‘players'” with their own ambitions in the region. He said they were using “democracy and freedom as a cover to deprive our natural resources, peace, liberty as well as creating chaos and terrorism in Iraq and the Middle East.”

He pointed to the year of the U.S.-led invasion of Iraq and stated: “Since 2003, Iraq is drifting under a systematically well-planned agenda aiming to dispose (of) Christians and other religious minorities, dismissing them from their own land and destroying their mutual history, values and morals.”

Patriarch Sako cited indicators that he said showed “Iraq is living now outside the scope of modern countries, away from the minimum limits of human rights and respecting the uniqueness of each group and religion,” most particularly Islamic State’s attack on Christians and Yezidis.

He called for opposing extremism by “dismantling terrorism and eliminating it from its roots,” which he said could be accomplished through a culture of tolerance and a refusal to be complacent with those who encourage and call for violence and fanaticism.

Jesuit Father Fadi Daou, chairman of Adyan, a Lebanese foundation for interfaith studies and spiritual solidarity, attended the conference. “Globally speaking, the conference is an important moment for Muslim reflection and internal debate about citizenship and religious diversity,” he said.

He said the Marrakesh Declaration, released Jan. 27, advocated “for a new Muslim position based on acknowledgment of citizenship and adopting it as a value in coherence with Islamic teaching.” This school of thought proposed “equal rights between Muslims and others and shared responsibility and participation,” Father Daou said.

Some Muslims were “attached to tradition and not ready to adopt new, modern language and reflection about citizenship,” Father Daou said. “They are more in a defensive apologetic attitude about Islam and the past, although condemning extremism and attacks to others.”

The challenge, he added, “is how to transform the political support to religious reform, with respect to democratic values.”

“The Holy Father has expressed his worries about the persecution of people across the Middle East and has called on us to reach out to them,” Cardinal McCarrick said. He said he was glad to share Pope Francis’ “concern for those whose life, liberty and happiness are being violated.”