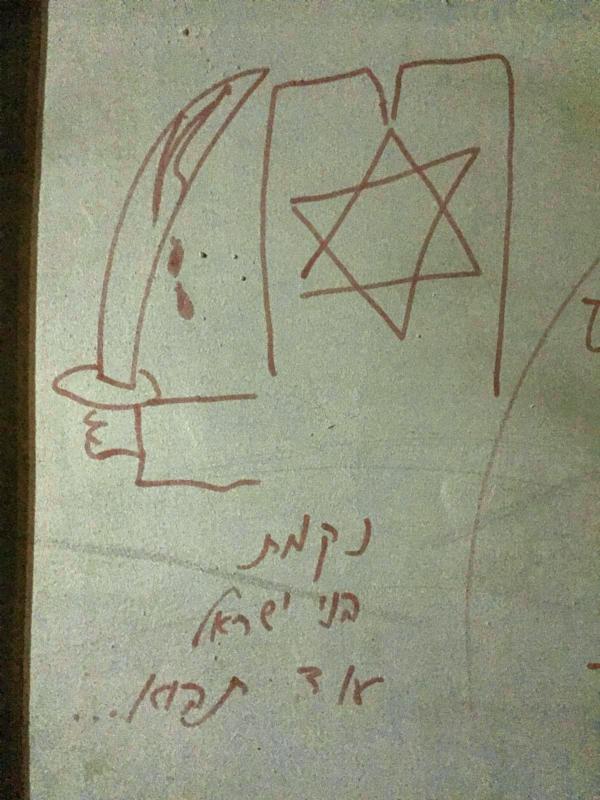 JERUSALEM (CNS) — Two teenagers were arrested in connection with the vandalism of two Christian sites next to the Old City.

Because of their age, 16 and 15, authorities released few details about the incidents in which anti-Christian slogans in Hebrew were discovered scrawled on the walls of the Benedictine Dormition Abbey monastery and the neighboring Greek Orthodox seminary, both located on Mount Zion next to the walls of the Old City.

The vandalism occurred Jan. 16 and 17, a week after a Christian cemetery was desecrated outside of Jerusalem.

Israeli police spokesman Micky Rosenfeld told the media that police were continuing their investigation to determine whether there is a connection between the latest vandalism and other anti-Christian incidents in the Old City. He said security has been heightened in the Old City.

The Latin Patriarchate of Jerusalem denounced the acts and repeated its belief in the importance of education toward tolerance while urging “follow-up” against those who incite intolerance against Christians.

“It is regrettable that such episodes of hatred come 50 years after ‘Nostra Aetate’ which initiated the interreligious dialogue of the Catholic Church with other religions, and turned a new page between Catholic Church and Judaism,” the patriarchate said in a statement Jan. 17. “We hope that the perpetrators will be arrested before proposed threats are carried out.”

Auxiliary Bishop William Shomali, chancellor of the Latin Patriarchate in Jerusalem, later said on the patriarchate’s website that the young age of the two suspects shows that a change in the education system is needed for young people who are “encased in intolerance.”

For the Dormition Abbey, which is believed to have been built on the spot where Mary died, it was the fifth time the building was vandalized in recent years. A fire that broke out at the monastery in February was determined to be arson, and another arson incident took place just after Pope Francis’ visit to the monastery in May 2015. In 2012 and 2013, anti-Christian graffiti also appeared on abbey walls.

Authorities said the graffiti appeared to be written by different hands. Photographs depicting the graffiti showed statements such as “Christians go to hell,” “Death to the heathen Christians, the enemies of Israel” and “Let his (Jesus’) name and memory be obliterated.”

Benedictine Father Nikodemus Schnabel, spokesman for the abbey, said in a statement Jan. 17 that the red and black paint the Israeli police used to crudely and unsuccessfully try to cover up the graffiti did even more damage.

He noted that between the nights of Jan. 16 and 17, there had been a loud and aggressive gathering with music and chanting by “Jewish right-wing radicals” in their neighborhood near the contested Tomb of David site. He said such disruptive gatherings have taken place nearly every Saturday for three years.

The graffiti, he said, was found in an area of the monastery that is not monitored by security cameras despite what he said was promised by Israeli security authorities in the summer 2013 when several monastery cars were badly damaged and hate graffiti was discovered on monastery walls.

Rosenfeld said he was unaware of such a promise about cameras and that police were investigating the most recent.

“We call on the security agencies to take appropriate measures against this hate crime and to work toward an improvement of the security situation on Mount Zion as it has been promised since summer 2013,” Father Schnabel said in his statement. “We are grateful for the overwhelming solidarity of all our friends in Israel. We as monks of Dormition Abbey will not cease to pray for reconciliation, justice and peace — and also for the perpetrators of tonight, that hatred may disappear from their hearts.”

As they have done since 2011 after other incidents, Tag Meir, a faith-based organization working to end racism in Israel, sent a delegation of members in support of the monastery and seminary to denounce the attack.

Israeli Prime Minister Benjamin Netanyahu condemned the attacks during a weekly cabinet meeting, saying “there is no place for actions like these.”

NEXT: Shrines are welcoming homes of forgiveness, mercy, pope says