Faithfulness in mercy is God’s way of being, pope says 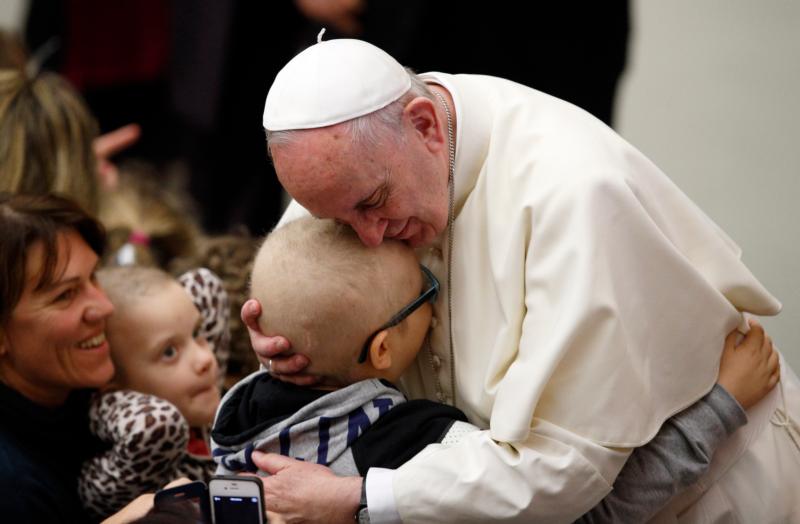 Pope Francis embraces a child as he meets the disabled during his general audience in Paul VI hall at the Vatican Jan. 13. (CNS photo/Paul Haring)

VATICAN CITY (CNS) — God’s mercy is constant and limitless; he is faithful in his mercy for his children, even when they are unfaithful, Pope Francis said.

The greatness and power of God unfolds in his “love for us, who are so small, so incapable,” he said at his weekly general audience Jan. 13.

In his first general audience of the new year, the pope began a new series of talks on mercy, reflecting on its description in the Bible, where from the “Old Testament to the full revelation of Jesus Christ, the mercy of the Father is revealed in its completeness.”

Speaking to some 6,000 people gathered in the Paul VI audience hall, the pope began by reflecting on the biblical description of God who is “merciful and gracious, slow to anger and rich in love and faithfulness.”

The pope said the Bible compares God’s merciful love to the tenderness and love of a mother who seeks “to love, protect, help (and) is quick to give everything, even herself” for her children. “That is the image that this word suggests,” he said. It is “a love that can be defined, in a good way, as ‘visceral.'”

God’s graciousness, he continued, is exemplified in his compassion for the weak and the poor along with his readiness to receive, understand and forgive. This aspect is seen in the father of the prodigal son who did not latch on to resentment against his son, but rather “continued to wait for him.”

“Great is his love and joy at having found him again; and then he goes and also calls his oldest son who is indignant and does not want to celebrate, this son who remained at home but lived more like a servant than as a son,” the pope said. “But the father stoops down to him as well, inviting him to enter, seeking to open his heart to love, so that none remain excluded from the feast of mercy. Mercy is a feast.” 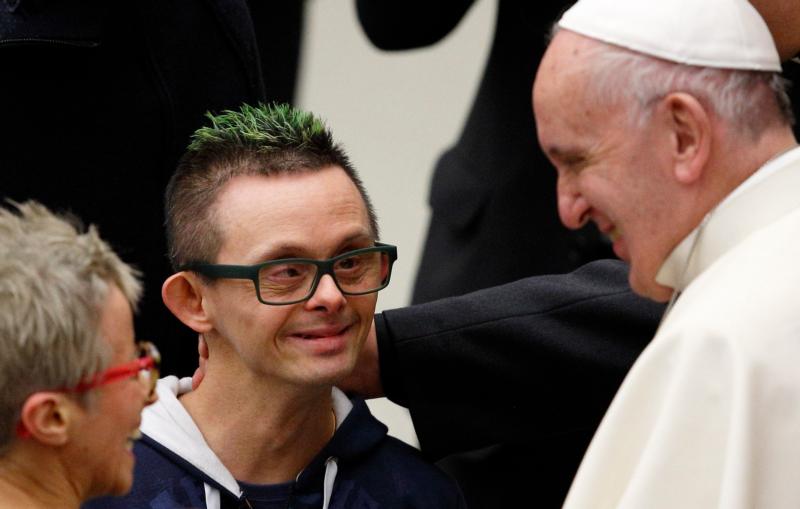 Pope Francis meets a man with green hair as he greets the disabled during his general audience in Paul VI hall at the Vatican Jan. 13. (CNS photo/Paul Haring)

The beauty of God’s love and faithfulness shows affection, grace and goodness, he said, and is nothing like the superficiality of a “soap opera love.”

“It is love that takes the first step; it does not depend on human merits but on an immense generosity,” he said. “It is the divine solicitude that nothing can stop, not even sin because he knows to go beyond sin, to overcome evil and to forgive.”

God’s mercy and faithfulness, he added, is a stable presence that strengthens faith and gives Christians the opportunity to experience his love, especially during the Holy Year of Mercy.

At the end of the audience, Pope Francis led the faithful in praying for the families and victims of a suicide bomb attack in Istanbul on Jan. 12. The attack claimed the lives of 10 people and left 15 wounded. Turkish officials said the bomber belonged to the so-called Islamic State terrorist group.

The pope prayed that “the Lord, the merciful, give eternal peace to the deceased, comfort to their relatives, firm solidarity to the whole society, and convert the hearts of the violent.”

NEXT: Oasis of mercy: Caring for those with HIV in Mexico’s Yucatan