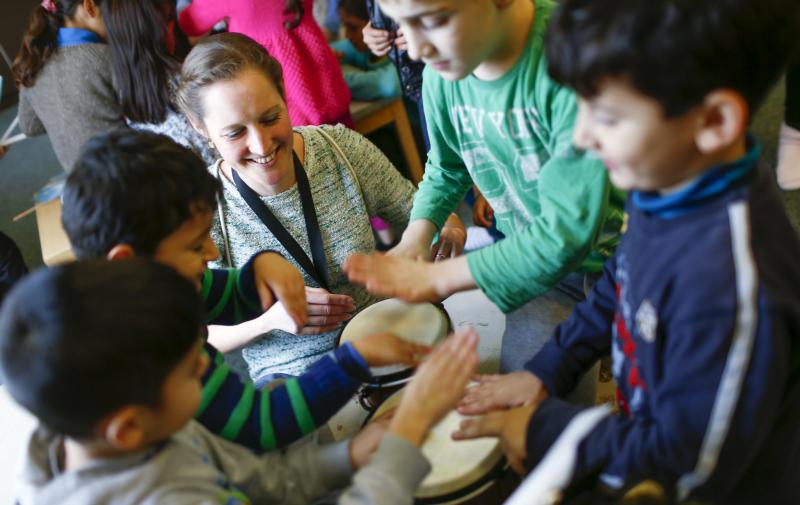 A volunteer plays drums with migrant children Jan. 26 at a refugee shelter in Berlin. Catholic bishops in Germany and Austria urged their countries to continue accepting refugees, despite demands for new restrictions after New Year's Eve violence in Cologne and other cities. (CNS photo/Hannibal Hanschke, Reuters)

BERLIN (CNS) — Catholic bishops in Germany and Austria have urged their countries to continue accepting refugees, despite demands for new restrictions after New Year’s Eve violence in Cologne and other cities.

“We need a reduction in numbers, but fixing an upper limit would be difficult,” Bishop Stephan Ackermann of Trier told the Trierischer Volksfreund daily Jan. 27.

“We also need flexibility. But it’s up to politicians to say how this can be achieved in practice, and it can’t be done only at a national level,” he said.

Some Germans have called for a cap on refugees, following violent incidents involving people newly arrived from Syria and other countries.

Meanwhile, the German church’s special representative for refugees said he believed a cap would violate the Geneva Convention and Germany’s Basic Law.

After New Year’s Eve attacks on women were blamed on refugees and migrants, pressure has grown on Chancellor Angela Merkel’s government to reduce the refugee influx to Germany, which received 1.1 million during 2015.

At a Jan. 24-25 meeting of European Union interior ministers, several countries said they could maintain new border controls until 2018 unless EU-wide measures were implemented.

However, Cardinal Reinhard Marx, president of the German bishops’ conference, and Cardinal Rainer Woelki of Cologne appealed for more admissions. Cardinal Woelki said in a Jan. 16 speech Europe would not “be saved by battening down the hatches.”

In neighboring Austria, the bishops’ conference said the human right to asylum was an “obligation under international law,” but cautioned that “legitimate concerns” about mass admissions should also taken seriously.

“It is up to political leaders to conduct this process with a sense of proportion,” said a statement on the bishops’ website. “The church can play an important role given the many languages spoken in Catholic communities. But migrants should also accept, as a prerequisite, the unconditional validity of human rights, as well as our democratic constitution and the equal status of men and women.”

At least 22,000 refugees are currently being housed by Catholic parishes and institutions in Germany, according to church sources, while the country’s 27 dioceses disbursed 100 million Euros ($109 million) in refugee aid in 2015.

In Austria, the Kathpress news agency reported Jan. 25 a Benedictine monastery in Melk had just taken in 30 Syrians and Iraqis, while Vienna’s Missionary Sisters of the Most Holy Redeemer had sheltered Syrians in their convent attic.

In his interview, Bishop Ackermann said he was also concerned about rising “populism and xenophobia” following recent incidents and feared anti-refugee feeling could “polarize and escalate” before March local elections.

“There’s an uncertainty in the population now, which politicians must take seriously — not everyone worried or scared about the situation can be labeled a right-wing extremist,” Bishop Ackermann said.

German bishops plan to hold a study day on refugees during their Feb. 15-18 plenary.