Politics of mercy: Pope knows ‘welcoming the stranger’ is controversial 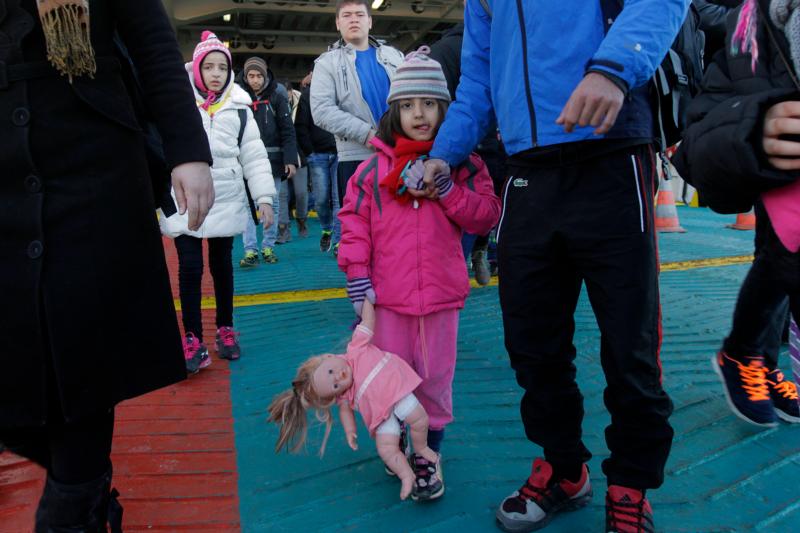 Refugees and migrants disembark from a ferry at the port of Piraeus, near Athens, Greece, Jan. 14. The ferry arrived carrying some 1,000 refugees and migrants who had landed the previous days on the Greek island of Lesbos, crossing from Turkey. (CNS photo/Orestis Panagiotou, EPA)

VATICAN CITY (CNS) — The Italian comedian talking about a new Pope Francis book was not joking when he said being a minister of God’s mercy can have social and political implications.

The corporal works of mercy of feeding the hungry and clothing the naked might not be controversial, but they are socially relevant actions. None of the corporal works, though, is as politically charged in the West today as “welcoming the stranger,” particularly if that stranger is a Muslim.

“We are called to serve Christ the crucified through every marginalized person,” Pope Francis said in the new book, “The Name of God Is Mercy.”

“We touch the flesh of Christ in he who is outcast, hungry, thirsty, naked, imprisoned, ill, unemployed, persecuted, in search of refuge,” the pope continued. “That is where we find our God, that is where we touch our Lord.”

The U.N. Refugee Agency reported last June that at the end of 2014, the number of people forcibly displaced because of persecution, conflict and violence reached the highest number ever recorded; it had grown to “a staggering 59.5 million compared to 51.2 million a year earlier and 37.5 million a decade ago.” The U.N. estimated the number had surpassed 60 million by the end of 2015.

The chief cause of the increase was the conflict in Syria, a conflict that is ongoing and continues to send people fleeing.

In 2015, the U.N. reported, 244 million people, or 3.3 percent of the world’s population, lived outside their country of origin.

The plight of migrants and refugees has been at the heart of Pope Francis’ concern as pope. Soon after his election in 2013, he went to the Italian island of Lampedusa to pray for migrants who had drowned attempting to reach Europe and to meet those who made it safely and those who have welcomed them.

Meeting Jan. 11 with ambassadors representing their nations at the Vatican, the pope made his concern for migrants and migration the key focus of his speech.

While acknowledging the social and political challenges that come with welcoming migrants, Pope Francis insisted on the human and religious obligation to care for those forced to flee in search of safety or a dignified life.

The pope’s concern for refugees is not just talk.

In September, the Vatican’s St. Anne parish welcomed a family of four from Damascus, Syria, providing an apartment, food and other assistance because under Italian law, asylum seekers are not allowed to work for the first six months they are in the country. The parish of St. Peter’s Basilica is hosting Eritrean refugees. A woman, whose husband is missing, gave birth to her fifth child shortly after arriving in Rome. She, the newborn and two of her other children are living in a Vatican apartment; she hopes soon to embrace her other two children, who are now in a refugee camp in awaiting the completion of family reunification procedures. In the meantime, the woman is hosting another Eritrean woman and her child in the apartment.

Archbishop Silvano Tomasi, the Vatican observer at U.N. agencies in Geneva, said the corporal work of mercy of welcoming strangers is “very political” and people’s fears are natural. “It’s something unavoidable that when you come into contact with the unknown, you are frightened.”

“When we are detached, when we don’t know them, we fear them and they fear us. The first reaction is suspicion,” he said. To overcome fear and fulfill the Christian obligation of welcome and care, “the first step is to get to know each other.”

Setting aside policies and procedures for determining how many refugees to accept, from where and how to vet them, Archbishop Tomasi said governments and politicians must pay greater attention to concrete steps for integrating newcomers. “That is what determines how people will react.”

“We must say to migrants, ‘You are in need. You are welcome here. We will give you housing, education, security. But there are values you must accept: the separation of religion and politics; respect and equality for women; respect for differences,'” he said.

In Europe and North America, integration is not adequately addressed, the archbishop said, “so it leaves room for misunderstanding, fear and is a way of justifying the rejection of persons who have a right to protection.”

Speaking to the diplomats at the Vatican, Pope Francis said an exaggerated concern for oneself leads to indifference toward others and, worse, to “fear and cynicism.”

But those forced to flee their homelands are the ones who have the most legitimate fears: Will they and their families survive? Which borders will be open to them? Will they be accepted? Will someone reach out a helping hand as they try to re-establish themselves?

Pope Francis insisted that people are the “paramount value to be cared for and respected.” A lack of concern for migrants, he said, stems from the same sense of self-preoccupation and fear of change that views some human beings as “‘not yet useful’ — like the unborn — or ‘no longer needed’ — like the elderly.”

Welcoming the stranger is not always easy, the pope said. “The massive number of arrivals on the shores of Europe,” for example, “appears to be overburdening the system of reception painstakingly building on the ashes of the Second World War.” In addition, large numbers of newcomers with a different culture and religious tradition leads to obvious questions about respecting differences while preserving a nation’s traditional cultural and religious values.

“Equally significant,” he said, “are fears about security, further exacerbated by the growing threat of international terrorism.”

Politically, Pope Francis said, nations must “find the right balance” between two serious and binding obligations: protecting the rights and safety of one’s citizens and ensuring assistance to and acceptance of migrants.

NEXT: Anglican leaders sanction U.S. Episcopalians, under pressure from Africans