Do me a favor? Pope phones theologian for help at Lent 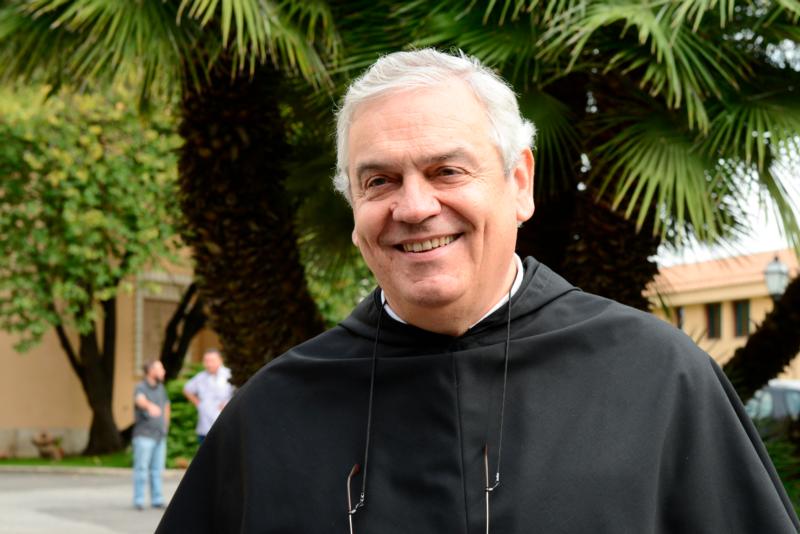 Servite Father Ermes Ronchi, an Italian theologian, has been asked by Pope Francis to lead the pope's annual Lenten retreat in Ariccia, a town about 20 miles southeast of Rome. Father Ronchi is pictured in Rome in this Sept. 29, 2012, file photo. (CNS photo/Cristian Gennari)

VATICAN CITY (CNS) — Pope Francis phoned a noted Italian theologian to ask him for a “favor” — to help him and Vatican officials prepare for Easter by leading an annual Lenten retreat, the theologian said.

The pope calling his cellphone caught Servite Father Ermes Ronchi by surprise, he said, and “my first reaction was trepidation, excitement.”

“When he told me that he had a favor to ask me, I didn’t hesitate and answered, ‘But of course, go ahead, whatever you need …,'” the priest told his local newspaper, Messaggero Veneto, Jan. 12.

But when the pope told the priest he wanted him to organize and lead a weeklong series of “spiritual exercises” for the pope and top Roman Curia officials, the priest said, “I tried to stall and I told him that I wasn’t sure I was the right person or good enough for the assignment he was offering me.”

He said the pope cut right to the chase and said, “So, we’re starting Sunday, March 6,” but then the pope asked the priest if he wanted “to check your calendar first” to make sure he wasn’t already busy.

At that point, Father Ronchi said he didn’t need to check his schedule and accepted the pope’s offer.

The annual retreat is expected to take place March 6-12 at a Pauline Fathers’ retreat and conference center in Ariccia, a town about 20 miles southeast of Rome.

Father Ronchi, 68, studied at the Sorbonne University in Paris, specializing in cultural anthropology and the history of religions.

A prolific author, he also teaches theological aesthetics and iconography at Rome’s Pontifical Theological Faculty Marianum, and he’s a regular contributor to Avvenire, the daily newspaper of the Italian bishops’ conference.

He also has his own segment on a weekly television program on RAI 1, Italy’s main station, in which he reflects on the Gospel.

Pope Francis quoted the Italian theologian in his most recent pre-Christmas address to the Roman Curia, saying, “Mercy is a scandal for justice, insanity for the intellect and consolation for we who are in debt. The debt of existence, the debt of being loved is paid only with mercy.”

PREVIOUS: Oasis of mercy: Caring for those with HIV in Mexico’s Yucatan