Refugees in Lebanon plead with USCCB representatives for help in resettling 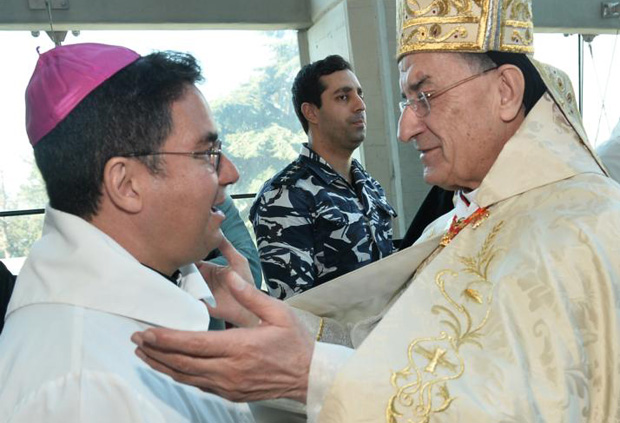 Bishop Oscar Cantu of Las Cruces, New Mexico, chairman of the bishops' Committee on International Justice and Peace, greets Lebanese Cardinal Bechara Rai, patriarch of the Maronite Catholic Church, Jan. 17. They concelebrated Mass for migrants and refugees at the basilica of Our Lady of Lebanon in Harissa. (CNS photo/Mychel Akl for Bkerke, the Maronite Catholic patriarchate)

BEIRUT (CNS) — Myrna calmly begins describing the challenges she faces as a Syrian refugee in Lebanon, but soon breaks down in tears over the enormous problems that have upset her family life: her husband has no work and her 7-year-old son with a heart condition now wets in his sleep because of stress. Some days the family goes without eating.

Along with about 25 fellow Syrian and Iraqi refugees, nearly all Christian, Myrna was part of a gathering Jan. 16 at a Caritas Lebanon community center in a Beirut suburb to meet with two visiting officials from the U.S. Conference of Catholic Bishops.

“We have come here to listen to your stories and to remind you that we are praying for you,” Bishop Oscar Cantu of Las Cruces, New Mexico, chairman of the bishops’ Committee on International Justice and Peace, told the refugees. “We are encouraging the world to create peace … and we want to let you know that you are not forgotten.”

Their weary, worry-etched expressions lifted somewhat by the solidarity, each refugee patiently awaited the opportunity to share their predicament with Bishop Cantu and Stephen M. Colecchi, director of the bishops’ Office of International Justice and Peace.

The refugees asked that their real names not be used because they feared for the safety of relatives and friends at home.

“I’d like to thank Caritas because when my husband had a heart attack, they helped us with the operation,” Nayla, a middle-aged Syrian woman begins, before sharing her shocking discovery that her pre-teen daughter was sexually abused in their former living space, shared with other refugee families.

“She was about to commit suicide,” Nayla said of her daughter’s trauma while fighting back tears. “Somehow God made me aware of this and I was able to stop her.”

The family has since moved for the girl’s protection.

But home now is a tiny, dark, single-room storefront, which Nayla described as “an awful place.” It never was intended to house a family.

Overwhelmed by the high cost of Lebanon’s daily living, the refugee families have been thrust into poverty. “It is very expensive here. There is no future for our kids,” Bishop Cantu and Colecchi repeatedly were told.

Exit options seem hopeless as refugees complain that the staff members of the United Nations High Commissioner for Refugees are not following up on their cases after an initial interview.

A middle-aged Iraqi woman told Bishop Cantu and Colecchi that her husband, four children and elderly disabled parents fled to Lebanon after the Islamic State invaded and drove out Christians from Mosul and the plain of Ninevah in summer 2014. In Lebanon, she became a widow. “Can you help us?” she pleads. “I don’t know what to do.”

Most refugees have at least one family member suffering from a chronic disease.

A young mother told the visitors that her young son needs surgery. A middle-aged man rolled up his sleeve to reveal a wound that never healed. Some parents lamented that their children experience panic attacks.

“Bishops of the United States are urging our government to accept more refugees, especially refugee families that are vulnerable and have urgent needs,” Colecchi explained to them. “Our government doesn’t always listen to the bishops, but the bishops never give up.”

In response, an Iraqi woman folds her hands beneath her stress-worn face, closes her eyes momentarily and then looks up toward the ceiling as if in hopeful prayer.

“We in Syria, as Christians, are persecuted,” a woman pointedly stated, adding that when her sister-in-law living in the U.S. inquires about resettling the family now lingering in Lebanon, she is told that there is no place in the U.S. for Syrians.

An Iraqi man explained to the visitors that when his relatives came to Lebanon from Iraq in 2007 and 2008, they stayed in the country less than a year and were resettled.

“They left Iraq voluntarily,” he said. “But we fled Iraq because we were threatened and pushed out by Daesh (the Arabic acronym for the Islamic State group). And we are still here (in Lebanon). What we are looking for is some help and to be resettled.”

Miriam, like many Christian Iraqis, maintained that she would not want to return to Iraq, even if the Islamic State is eradicated.

“Anyway, the situation will not improve there. We will still have militias” she said, noting that her country’s Christian population has dwindled so much that if the Christian presence disappears “no one will even notice.”

“We are tired,” a fellow Iraqi woman bemoaned. “If they don’t find a solution for me and my family, I’m ready to leave by a boat, even if we are going to drown. At least we will die once and not every day like we (feel we) are dying now in Lebanon.”

Bishop Cantu told CNS after the visit that the encounter with refugees “certainly helped us to put a human face on a global issue.”

“And then to live in a country that is not your own, as a guest. You appreciate the hospitality that you can receive, but the hospitality grows cold and life becomes stressed and difficult when weeks stretch into months and years.”

Colecchi told the refugees that 500 Catholic leaders will meet in Washington Jan. 23-26 for the annual Catholic Social Ministry Gathering. “They will go to every office in Congress to urge our nation to be more generous in allowing refugees into our nation, and our church agency stands ready to sponsor them,” he said.

Still, refugees would like to see a unified global response from the Catholic Church.

An Iraqi Christian refugee suggested to Bishop Cantu and Colecchi that “maybe if all the bishops of the world — not just the United States — could pray to find a solution and get us out of this misery.”