The presence of God in all creation 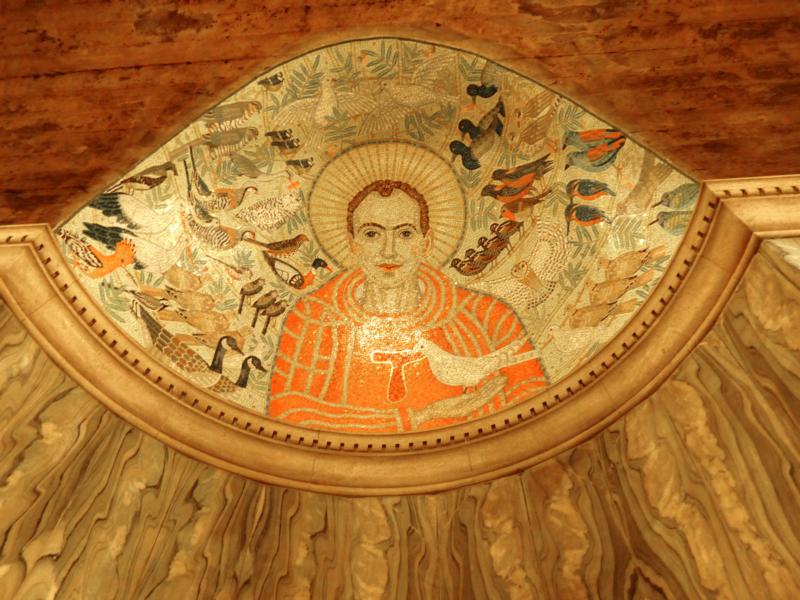 St. Francis of Assisi, patron saint of ecology, is depicted in mosaic at Westminster Cathedral in London. Not all of us are called to become clones of St. Francis, though there is much about his life that we all would do well to reflect on. (CNS photo/Mike Nelson)

My late uncle, who was also my godfather, was a devoted Lutheran, family man, lover of animals and wiseacre who enjoyed pointing out that while most of his neighbors in small-town Iowa were Catholic, he was the only one with a statue of St. Francis of Assisi in his backyard.

“Can you believe it?” he would say with a sly grin. “I’m more Catholic than they are.”

In fact, St. Francis’ October feast is honored in Anglican and Lutheran churches in the U.S., Canada and Great Britain, as well as in the Catholic Church — meaning that my uncle’s devotion wasn’t as unlikely as it may have seemed.

Indeed, few saints are as acclaimed or beloved as Francis of Assisi, a man who, in the midst of living “la vida loca,” renounced his wealth (to his family’s great consternation) and gave the rest of his relatively short life (he died in his 40s) to loving all of God’s creation.

That kind of sacrifice — a timely topic during Lent — is something we admire greatly, at least in part because we can’t imagine ourselves doing likewise. We can give up something we like for a time. We can donate from our excess. We can even make some behavioral changes that last beyond Lent.

But to do something as radical as St. Francis, who gave up everything he had permanently, to follow Jesus without turning back, that requires an extraordinary courage and faith that most of us lack.

Not all of us are called to become clones of St. Francis, though there is much about his life that we all would do well to reflect on. A good place to start is with Francis’ Prayer Before the Crucifix at San Damiano. It goes like this:

“Most High, glorious God, enlighten the darkness of my heart and give me true faith, certain hope and perfect charity, sense and knowledge, Lord, that I may carry out your holy and true command.”

This prayer — from which Franciscan tradition says Francis received God’s command to rebuild the church — gets to the heart of discipleship, which is to love one another. Francis, of course, took this several steps further than most of us, recognizing the presence of God in all creation — sun and moon, wind and rain, plants and animals, and people of all persuasions and all afflictions, physical and spiritual.

And in a world beset with serious ecological issues — from drought and global warming to the disappearance and/or endangerment of various plant and animal species — it makes sense to take St. Francis’ teaching to heart and into reflection.

How many more housing developments and shopping centers that place a burden on limited water supplies do our communities need? How much more nonrecyclable, nonbiodegradable “stuff” must we buy that someday will end up in a landfill to do heaven knows what to the land?

Asking both questions another way, how can we use what is already in place, or what we already have, to serve the same purpose? Most important, how do we acknowledge that all we use and receive, all that is present in our world, is, in fact, rooted in the gift of God’s goodness? And how do we respect and value that gift?

Lenten “sacrifice” is not about giving up, but about giving over — that is, giving over one’s life to understanding God’s will and desire, to letting go of what separates us from God. Lent, ultimately, is about connecting to God.

St. Francis sought to connect with God through all creation — loving not just birds and bunnies (like those on my uncle’s statue), but the big animals, too, the not-so-cuddly ones, the ones (including the human ones) with an attitude. That’s a good example for us all, whatever denomination we may be.

NEXT: Lent lessons from St. Francis