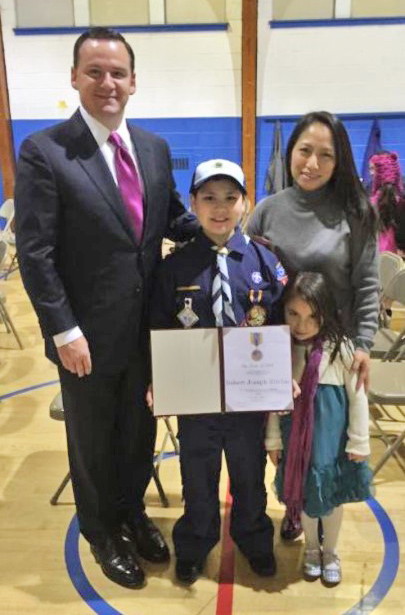 Boy Scout Robert Ritchie stands with his parents, Robert F. and Lisa V. Ritchie, and little sister Allison, as he displays his Medal of Merit award from the Boy Scouts of America, one of only 250 recipients each year nationwide.

Time seemed to stand still on that hot June day last summer at the Winchester Swim Club in Philadelphia. The lifeguard on duty stood on her tower and started blowing her whistle and pointing, which caught the attention of sunbathers and swimmers. Everyone looked toward the pool, wondering what was happening.

Robert Ritchie knew. He saw two toddlers, whose swimmies had deflated, floundering in the 12-foot diving area of the pool. A strong swimmer by the age of 5, he sprang into action, grabbing the 3-year-old and 4-year old brother and sister by the elbow and pulled them, kicking his own feet frantically, to shallow water.

Robert-the-hero was himself only 7 years old at the time.

Robert’s father, Bob, recounted the events that he and his wife, Lisa, witnessed, and that led their son, now 8 and a third grade student at St. Matthew School in Northeast Phildaelphia, to be awarded the prestigious Boy Scouts of America Medal of Merit.

The award honors Scouts who have performed an act of meritorious service above and beyond what is normally expected of a youth or adult member of the organization. Robert was chosen by Boy Scouts officials in Irving, Texas, the Scouts’ national headquarters.

Only 250 medals are awarded every year across the United States.

Bob Ritchie said that the little children were probably pulled by an undertow that exists where the shallow and deep water intersect. The toddlers’ parents were part of a larger party celebrating a birthday and they were not paying attention to the youngsters until after they were rescued, Bob said.

“They were very embarrassed. They just picked the kids out of the pool and left. Robert really did a great thing that day,” Bob said of his son.

Eileen Rocks, Robert’s teacher at St. Matthew School, said she was “flabbergasted” when she heard the story.

“But it’s typical of him. He’s a kind and polite young man who is always ready to help, and his parents are very supportive of him,” Rocks said.

Robert was more reticent to talk about his heroics. He recalls that his friends saw him swimming really fast to get to the children.

“I felt good that I could keep them above the water,” he said.

Scouting and saving seem to run in the family. Robert’s father and grandfather reached Eagle Scout level, as did Bob’s cousin, a surgeon in Hartford, Ct. When the cousin was 15, he saw an elderly man unconscious at the bottom of a pool and pulled the man to the surface.

Bob Ritchie, a lieutenant with the 17th district of the Philadelphia Police Department, is at a loss for words to describe how he feels about his son’s courage.

“The pride beaming from my heart is more than I can describe,” he said.

PREVIOUS: Manayunk’s old church seeing renewal, along with its congregation

NEXT: Parishioners hear of woman’s journey from abortion to family life