Manayunk’s old church seeing renewal, along with its congregation 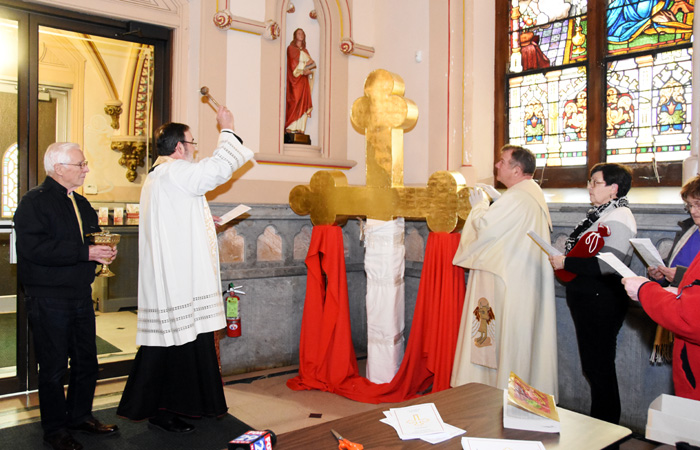 Msgr. Kevn Lawrence, left, blesses the refurbished gold cross that was replaced atop the bell tower of St. John the Baptist Church in Manayunk on Monday, Feb. 8. (Photo by Sabina Pierce) 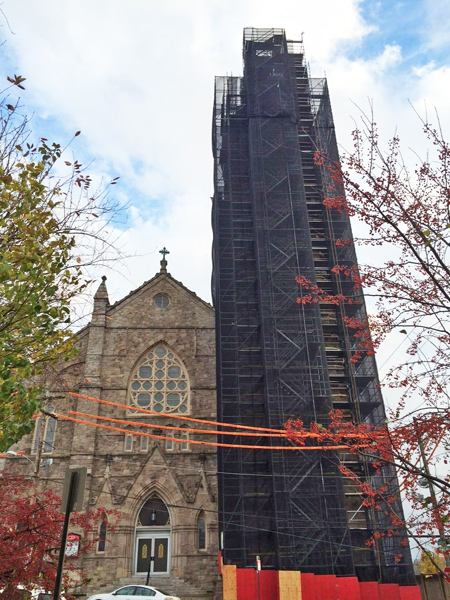 Motorists traveling on the Schuylkill Expressway in recent months might have noticed across the river in Manayunk the imposing bell tower of St. John the Baptist Church swathed in scaffolding. During the visit to Philadelphia by Pope Francis it served as an excellent site to hang a 25-by-50-foot banner welcoming his holiness to the city.

Very soon the scaffolding will come down and presumably the resident peregrine falcon couple will return from winter vacation to their perch on the tower and their all-consuming and never-ending task of clearing the area of pigeons and starlings.

Church buildings are often a metaphor for the worshiping communities that utilize their space and make up the Church in its true meaning. Buildings age and must be renovated in timely fashion lest they fall into ruin. Congregations age and must be constantly renewed lest they dwindle to nothing.

Msgr. Kevin Lawrence is pastor of St. John the Baptist parish where he is undertaking the restoration of the buildings simultaneous with the spiritual revitalization of the faith community.

The name, Manayunk, derives from the Delaware Indian word Mene-iunk which means “where we go to drink,” probably because the area sits at the confluence of the Schuylkill River and Wissahickon Creek. That name perhaps takes on new significance with the proliferation of evening watering holes in now trendy Manayunk.

The parish itself traces back to 1831, and at that time was the most outlying of the parishes within what is now the Philadelphia city limits. The name, “St. John the Baptist,” was also probably chosen because the then-hamlet was almost surrounded by water. In his diary after the April 4, 1831 dedication, Bishop Francis Patrick Kenrick described it as “small, but neat in appearance,” and “completely built within ten months.”

Today’s St. John the Baptist is certainly not small (92 feet wide by 187 feet long) and it took quite a while to build. The cornerstone was laid in 1886 and the church was dedicated by Archbishop Francesco Satolli, the papal legate on April 1, 1894. As a matter of fact, the 208-foot bell tower, a dominant feature in Manayunk, was not completed until 1905. 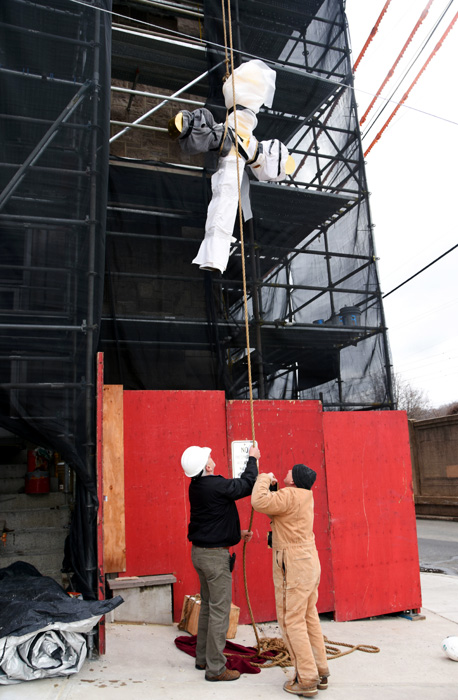 The cross is hoisted past the scaffolding at St. John’s to rise 208 feet above the ground. (Photo by Sabina Pierce)

Because a majority of Catholic immigrants who arrived in Philadelphia already speaking English were from Ireland, there was never a need to establish an Irish personal parish. St. John the Baptist was really for Catholics of any nationality although most early parishioners were Irish or Irish descent.

Times of transition and renewal

In 2012, because of declining Mass attendance and fewer priests available, the parishes in Manayunk were merged as part of the ongoing archdiocesan parish pastoral planning. St. Mary of the Assumption and St. Josaphat became worship sites of St. John, while St. Lucy became a worship site of nearby Holy Family Parish.

When Msgr. Lawrence arrived at St. John’s in June 2014, he was faced with both pastoral and temporal challenges. Pastorally, a great deal has been accomplished since the merger toward melding the communities, especially through the work of an active Parish Pastoral Council. 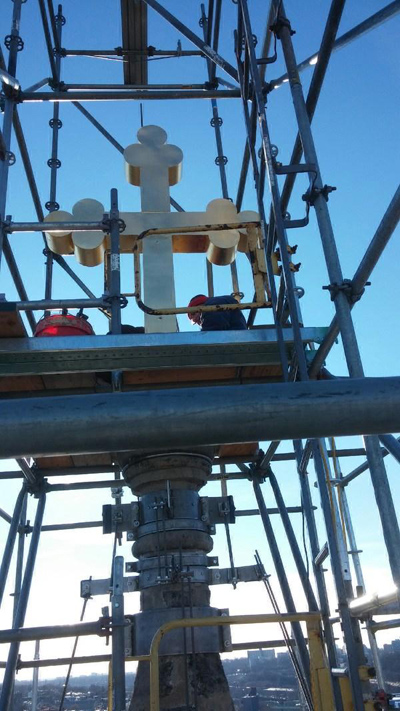 Now Msgr. Lawrence and his parish councils are addressing long-deferred maintenance to the church itself as well as the other buildings. The entire project will cost several million dollars, and at this time approximately $1 million has been raised or pledged through a successful capital campaign.

When St. John the Baptist was built, the primary exterior material was mica schist, a type of stone that while attractive, needs periodic maintenance and sealing. Engineering studies showed this was especially needed in the bell tower and the huge buttresses that support the walls.

The first item to be addressed was the buttress facing Cresson Street, which was the most compromised. It has been rebuilt and now the work on the tower is almost completed.

While the scaffolding was up for the tower structural repairs, Msgr. Lawrence had contractors also make aesthetic repairs. For example the cross on top of the tower was totally restored and given new gold leaf, the clock is being repaired, tower flooring repaired, and the copper-clad louvres replaced.

The buttresses at the front façade are next on the list and following that the buttresses facing the former school. In all, it is a multi-year project to restore the church inside and out to pristine condition as well as work on other parish buildings.

“I’m a great believer (that) if we build it they will come to participate in our worship and in our community,” Msgr. Lawrence said.

At this point Manayunk has transitioned from generations-long families to perhaps 60 percent millennials in the 21-35 age bracket. The new challenge is creating a worship community that will encourage them to stay rather than transition out to another neighborhood.

A long-time goal on Msgr. Lawrence’s wish list is someday the restoration of a Catholic school to Manayunk, something it now lacks.

“Our goal is to discern God’s plan for the future,” Msgr. Lawrence said.

Meanwhile, the Church in Manayunk is a vibrant community of faith that is committed to the Gospel and the teachings of the Church.

That is something to celebrate, and St. John the Baptist Parish intends to fully embrace that on April 24 with a 185th anniversary Mass celebrated by Archbishop Charles Chaput and an old-fashioned Philadelphia block party complete with a Mummers string band.

NEXT: Phila. Boy Scout honored for rescue of drowning toddlers