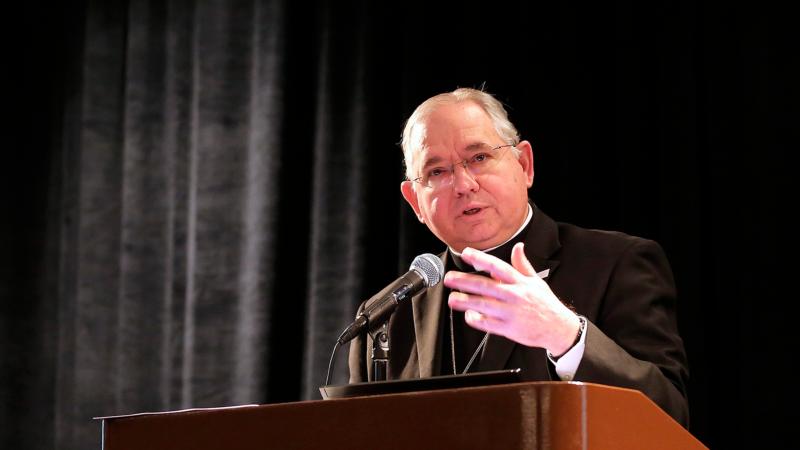 Archbishop Jose H. Gomez of Los Angeles is seen in this Aug. 24, 2013, file photo. In an address to a Hispanic pro-life congress, Archbishop Gomez called on Latinos to build a pro-life culture and not a political coalition. (CNS photo/Victor Aleman, Vida Nueva)

SANTA ANA, Calif. (CNS) — Saying the future of the pro-life movement is “cultural not political,” Archbishop Jose H. Gomez of Los Angeles called upon Catholic Latinos to work toward a “new Christian humanism, a new vision of society and human destiny that is rooted in the Gospel.”

“We want a new culture, not a new political coalition,” he told participants at the Hispanic Pro-life Congress Jan. 30 at Mater Dei High School in Santa Ana, pointing to the necessity of changing society’s views on the “fundamental injustice” of abortion and euthanasia.

Archbishop Gomez said that the practice of abortion and euthanasia raises concerns about “what kind of society we are and what kind of people we want to be.”

He expressed unease that society is losing a sense of its common humanity and responsibility for others, especially when it comes to abortion and euthanasia, which he called the most important issues facing the country.

While running through a list of social sins and the importance of addressing racial discrimination, deportations and unjust immigration policies, unemployment, homelessness, pollution of the environment, neighborhood violence, drug abuse, decrepit prisons and the death penalty, the archbishop said the church must place abortion and euthanasia foremost in its efforts.

He said the “‘seamless garment’ or ‘consistent ethic of life'” positions espoused widely are “not the vision we need.”

“Because in practice the ‘seamless garment’ and ‘consistent ethic’ result in a mistaken idea that all issues are morally equivalent,” he said. “And, of course, they are not. So in everything we need to be clear that the root of violence in our society is the violence against those who are not yet born and those who are the end of their lives.”

It is the church’s role to declare that the right to life is the foundation of all other rights, justice and peace in the world, the archbishop explained in calling for a “new vision for our efforts.”

“This vision is spiritual not political. And because it is spiritual, it makes no sense for there to be any division between our ‘pro-life’ efforts and our work for ‘social justice.’ In the face of the suffering and human need in the world, we cannot compartmentalize our compassion or draw lines between those we will care about and those we will not,” Archbishop Gomez explained.

He urged a deeper appreciation for the Gospel, which he said “is the core of God’s beautiful plan of love for creation and for every human life that he revealed in Jesus Christ.”

The Gospel of life, the archbishop added, is what the early church called the “kerygma,” the core teaching of the faith.

He quoted Pope Francis, who summarized kerygma: “Jesus Christ loves you; he gave his life to save you; and now he is living at your side every day to enlighten, strengthen and free you.”

Urging his audience to “stay close to Jesus,” Archbishop Gomez said Catholics have a duty to welcome and protect life and to care for life, every life” because God loves every person, especially those who are poor, marginalized and alone. “With God’s love, there are no boundaries, no borders, no barriers,” he said.

He also called for building friendships and to “be in dialogue with those who disagree with us.”

“We can’t negotiate about good and evil. … But we need to work with and talk to people who may not share our full vision of a culture of life, or at least people who don’t share our vision yet,” he said. “We have to be optimistic that truth, lived with joy, will lead to conversions and new ways of thinking.”

Describing the church’s mission as one of bringing mercy to society, especially for those who are “inconvenient and unexpected” and those who “impose a burden on our way of life,” Archbishop Gomez reminded the audience to love as God loves.

“We need to build a community of conscience; to defend life and protect life,” he said.