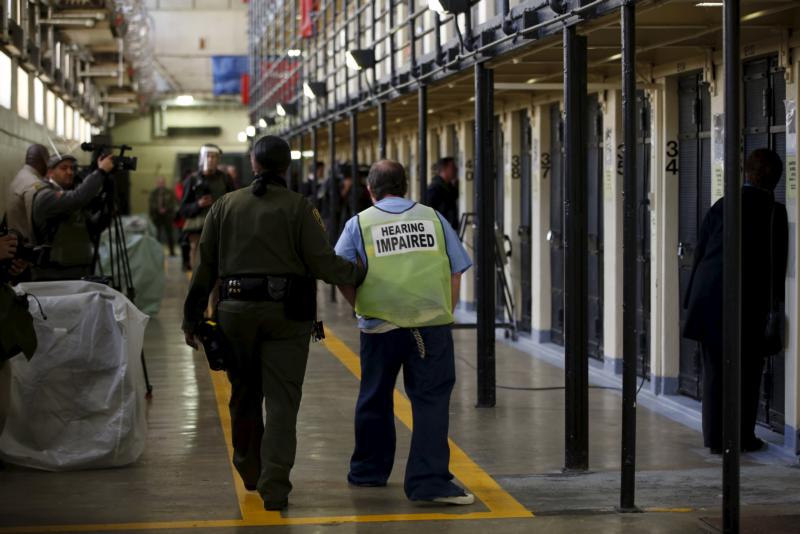 A guard escorts a hearing-impaired inmate down a corridor during a media tour of death row at San Quentin State Prison in California. This year several states are looking at legislative reform of the death penalty and some are considering repealing it. (CNS photo/Stephen Lam, Reuters)

WASHINGTON (CNS) — The death penalty in the United States is repeatedly getting hit by the pause button — which doesn’t mean it is going away anytime soon, but at the very least it is getting a second look by state legislatures, courts and the U.S. Supreme Court.

This year, several states are looking at legislative reform of the death penalty and some are considering repealing it. In early February, both Delaware and Florida announced they were halting executions until the states’ Supreme Courts determine the constitutionality of death penalty laws.

And already this year, the U.S. Supreme Court has weighed in a few times, with mixed messages, on capital punishment. In mid-January, the court declared Florida’s death penalty statute unconstitutional, a decision that came five days after the state executed a man who had been on death row for 23 years.

The justices struck down Florida’s system of imposing death sentences because the state allows judges, rather than juries, to determine whether a convicted criminal should get a death sentence.

Less than two weeks later, the Supreme Court reinstated death sentences for three convicted Kansas murderers, reversing the state Supreme Court’s decision of tossing out the death penalty on the men known for the “Wichita Massacre” in 2000 for procedural reasons.

The two rulings, one which seemed to favor capital punishment and the other which didn’t, did not make major waves in the ongoing debate since they were essentially focused on procedures, not the death penalty as a whole.

Raising more questions about how the court might address the issue down the road was a dissent by Justices Stephen Breyer and Ruth Bader Ginsburg to the majority of the court upholding a controversial lethal injection protocol — they suggested the death penalty may violate the Eighth Amendment’s ban on cruel and unusual punishment.

This year, the court chose not to act on individual pleas by death-row inmates, including a plea by an Alabama prisoner who was put to death in January and an appeal by a Pennsylvania death-row inmate asking the court to consider banning the death penalty across the United States. Another appeal, from a Texas death-row inmate, was just filed with the court Feb. 4.

There have been five death penalty executions so far this year: two in Texas, one in Florida, one in Alabama and most recently, one in Georgia — the Feb. 2 execution of a 72-year-old man who spent the past 36 years on death row.

Currently, 31 states have the death penalty, but the number of executions each year has been decreasing, according to the Death Penalty Information Center.

There also has been plenty of debate and discussion about the death penalty at the state level, where state Catholic conferences are urging legislators to repeal the death penalty or at the very least, as in Virginia and California, be transparent about the source of drugs used in lethal-injection executions.

During a hearing in late January on this topic, Father George Horan, a volunteer chaplain at the Men’s Central Jail in Los Angeles, said he disagreed with the new rule that spiritual advisers must leave three hours before an execution takes place. He also noted that in accordance with Catholic teaching and canon law, confessions with inmates cannot be conducted by phone.

The priest also stressed that the new protocols should offer more counseling to everyone who witnesses an execution.

“To me, it just seems insane that we invite people to witness executions,” he said. “Gang members don’t do that.”

States such as Kentucky that do not have death penalty legislation on the upcoming docket will likely look at the issue in upcoming sessions, said Father Patrick Delahanty, a retired priest who is chair of the board of the Kentucky Coalition to Abolish the Death Penalty.

A Jan. 28 editorial in The Record, archdiocesan newspaper of Louisville, pointed out that the priest is cautiously optimistic about the death penalty law changing in the state and that he and other advocates continue to grow more encouraged about it.

In South Dakota, a Republican state senator, who is a retired circuit judge, is sponsoring a bill not only to repeal the death penalty but to commute current death sentences to life sentences without the possibility of parole.

The senator, Art Rusch, told the Yankton Daily Press & Dakotan newspaper that his views stem from his experience as a judge and sentencing a man to death in 1997.

“Doing that changes how one looks at the death penalty. It’s too hard on the people who have to participate in it — it’s too expensive — and it doesn’t work.”

He also gave credit to the pope, saying: “Pope Francis has designated 2016 as the Year of Mercy. I can’t think of a better thing to do this year than repeal the death penalty.”

NEXT: Charlotte priest Super Bowl-bound; Catholic players invite him along