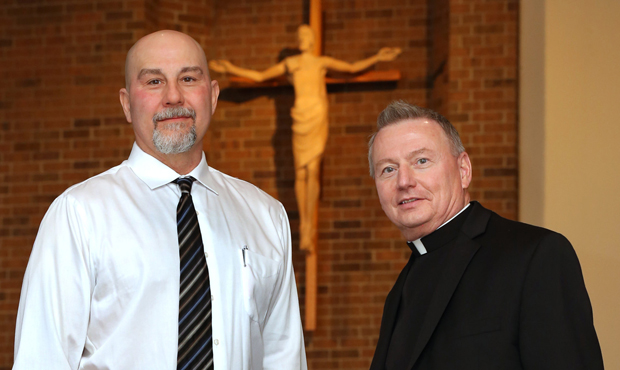 D’Ambrosio would not listen, however. Another inmate had told him the priest had been a lawyer before ordination. Now, D’Ambrosio pleaded for help with his case.

A three-judge panel had convicted D’Ambrosio of murder in 1989 after a trial that lasted less than three days. No forensic evidence linked him to the crime and D’Ambrosio insisted he had not killed teenager Anthony Klann.

“My ministry on death row was never about getting involved in their cases,” he said. “I simply wanted to companion some men who had been sentenced to death.”

He told D’Ambrosio he did not have time to read thousands of pages of transcripts and appellate work. Father Kokoothe was stunned when the convict informed him that his capital case filled a single volume.

The priest read it, spotting problems in the only witness account that placed D’Ambrosio at the crime scene. Father Kokoothe knew, for example, that it was impossible for the victim to scream for mercy with gaping stab wounds in his trachea. Not only was the priest a lawyer, but he also had worked as a registered nurse for 15 years.

Father Kokoothe visited D’Ambrosio a few weeks later. He promised to investigate — but only if the prisoner swore he had nothing to do with the murder. Then he added another condition.

“He looked me dead in the eye and said, ‘One little deceit and I’m through with you!'” D’Ambrosio recalled.

Father Kokoothe said that some people ignore his background as an attorney and a nurse. They assume he believes anyone claiming to be innocent.

“I think just the opposite is the case,” he said. “I want empirical proof that this is true.”

For his part, D’Ambrosio longed to clear his name.

“He knew that a new trial and new evidence would win his freedom,” Father Kokoothe said in an interview for Catholic News Service.

In his ensuing research, the priest learned that Klann, the only witness in a rape trial, had been slain before he could testify. The accused rapist was the same man who fingered D’Ambrosio for Klann’s murder.

The priest enlisted the aid of journalists who eventually publicized D’Ambrosio’s story. Still, the years rolled by. Then another death-row inmate exhausted his appeals and he asked his spiritual adviser, a minister, to help D’Ambrosio instead. The pastor contacted a prestigious law firm and it agreed to work pro bono on D’Ambrosio’s case.

Meanwhile, Father Kokoothe continued to support D’Ambrosio. The men are close in age, with both in their mid-50s, but the priest developed a paternal attitude toward the prisoner. Prior to a retrial, a judge ordered that D’Ambrosio be released on house arrest. Father Kokoothe worried it would be cruel to give D’Ambrosio a taste of freedom, however limited. If the case went against the defendant, he might return to death row within months. Father Kokoothe advised him to stay in the county jail.

D’Ambrosio moved into a friend’s apartment, leaving it only for medical appointments and meetings with his lawyers.

Then, during a pre-trial hearing, the prosecution revealed that it still had not shared all physical evidence with D’Ambrosio’s defense team. A federal judge soon ordered D’Ambrosio’s release, and she ruled that his conviction and sentence be expunged. He was exonerated Jan. 23, 2012.

Prosecutors appealed her decision. In 2012, the U.S. Supreme Court refused to hear the case.

“He essentially started everything in terms of overturning Joe’s conviction,” Mills said of the priest. “By meeting with Joe and really listening, he got the ball rolling.”

As a free man, D’Ambrosio no longer needed an advocate, but his life had been on hold for two decades.

By that time, Father Kokoothe was pastor of St. Clarence Parish in North Olmsted. Many parishioners had corresponded with D’Ambrosio when he was in prison; some attended his court proceedings. Nobody objected when the parish hired the self-described jack-of-all-trades as a maintenance man.

Congregations of various religious denominations as well as groups opposed to capital punishment often invited D’Ambrosio and Father Kokoothe to relate their experience. When the two finally spoke at St. Clarence, parishioners packed the church. They presented D’Ambrosio with a watch engraved with the date of the Supreme Court decision that allowed him to get on with life.

“It’s one of my most cherished things,” D’Ambrosio said. “I’ve never felt more unconditional love than I have in this parish. This is my family.”

In this Year of Mercy, they will make several presentations.

Although he sometimes speaks alone, D’Ambrosio said they work best as a team.

An incident last year illustrated this.

“Death row is not a good experience,” Father Kokoothe said. “If it were me, there would come a time when I wanted to put it behind me, totally, and just move on.”

He asked D’Ambrosio when he wanted to stop speaking about his ordeal.

Almost executed for a crime he did not commit, D’Ambrosio did not need to reflect before answering.

“Not until the death penalty is done,” he said.