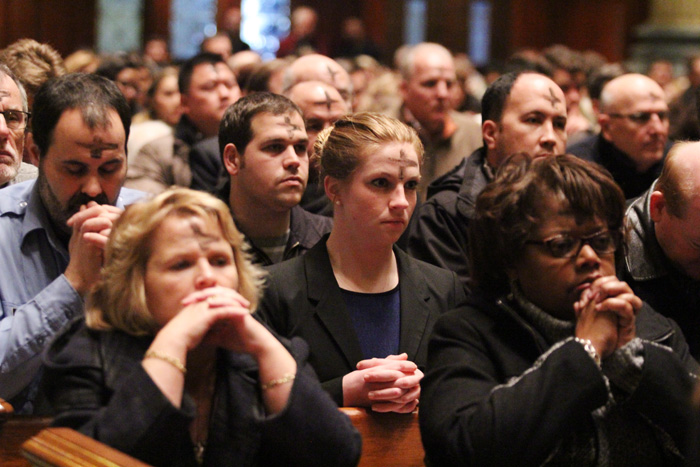 Catholics begin Lent with the sign of the cross on Ash Wednesday, Feb. 10, at the Cathedral Basilica of SS. Peter and Paul, Philadelphia. (Photo by Sarah Webb) 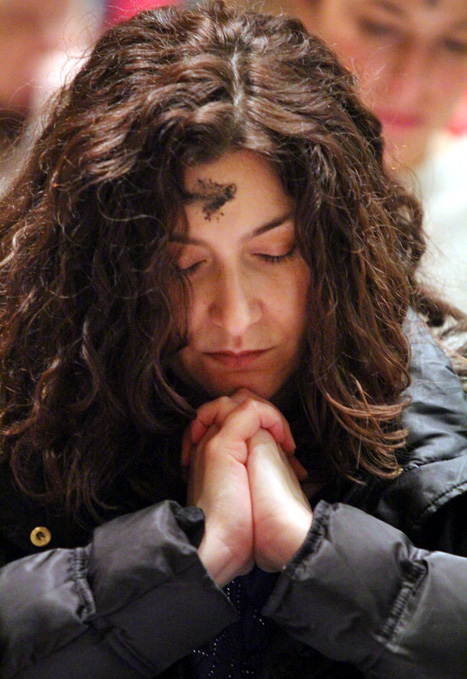 WASHINGTON (CNS) — What do a new social media campaign, a new fundraiser and new features for a popular app have in common?

Launched by different Catholic organizations for Lent, the three efforts aim to help Catholics enrich their Lenten prayer experience, sacrifice to help others in need and learn more about the church’s penitential season overall.

Chicago-based Catholic Extension announced development of a social media campaign that will create a video chain of Lenten mercy prayers.

“The three pillars of Lent are fasting, prayer and charity,” it said, and the new campaign “is promoting the second pillar and asking American Catholics to focus their Lenten prayers on mercy” during the church’s Jubilee Year of Mercy.

Extension’s “National Year of Mercy Prayer” — launched Feb. 10, Ash Wednesday, and running all through Lent — is asking people to share their prayer intentions through short digital videos. The website mercyprayer.org invites Catholics to use their smartphones to record short videos — about 10 seconds long — of themselves stating a simple prayer intention followed by “Lord, have mercy.”

A short introductory video posted on the website asks people to “help us harness the power of prayer to change the world.” Examples in that video include: “For college students and young adults seeking to discern their place in the world, Lord have mercy”; “For the wisdom to see Christ in the stranger, Lord have mercy”; and “For my family and the unity of all families, Lord have mercy.”

“Your intention can be as general or specific as you would like,” the announcement says. But it also tells people to “remember that it will be made public and posted online as a part of our prayer.”

Catholic Extension, which supports the work and ministries of U.S. mission dioceses, asked people to send their brief videos to socialmedia@catholicextension.org “and to spread the word to their families, friends and parishes.” Participants were encouraged to post their intentions on social media; other intentions can be viewed using the hashtag #MercyPrayer.

The final video prayer and full list of intentions will be posted on Catholic Extension’s website, www.catholicextension.org, and its social media on the first Sunday after Easter, April 3, which is Divine Mercy Sunday.

The Knights of Columbus, based in New Haven, Connecticut, is asking those considering a Lenten sacrifice to give “40 Bucks for Lent” and use the hashtag #40BucksForLent to help Middle Eastern Christians and other religious minorities suffering religious persecution in that region of the world.

“Since many people give up something for Lent, we wanted to provide an opportunity for their sacrifice to make a difference — not only in their own life, but in the lives of others,” said Supreme Knight Carl Anderson in a Feb. 9 statement.

“During the Lenten season, we recall Christ’s suffering and death,” he said. “In turn, remembering and assisting those who are today suffering and dying for their belief in Christ is an excellent way to do good where it is most needed and to enter more deeply into the spirit of this season.”

The Knights of Columbus began its Christian Refugee Relief Fund in 2014. To date, nearly $10 million has been raised to provide housing, food, medical aid, education and general relief to persecuted Christians and other religious minorities especially from Iraq and Syria, and to raise awareness about their plight.

In Denver, the Fellowship of Catholic University Students, known as FOCUS, has added several new features to its Lentsanity app this Lenten season.

The Lentsanity app can be downloaded from the Apple App Store and Google Play. The app also can be accessed at focus.org/lentsanity.

Launched in 2014, the FOCUS app shares several illustrated guides to the Catholic faith — including on topics such as Lenten fasting and abstinence; “lectio divina,” the prayerful reading of Scripture; solemnities, feasts and memorials; and the Triduum. Three new guides are set to be released for the app: on the Stations of the Cross (Feb. 18); confession (Feb. 21) and acts of mercy (March 7).

The app and website will include a Confession FAQ and Examination of Conscience megapost with links to different types of examinations.

PREVIOUS: ‘I’ve seen this in too many places,’ cardinal says of human trafficking

NEXT: For Idaho chef, faith is a vital ingredient of life