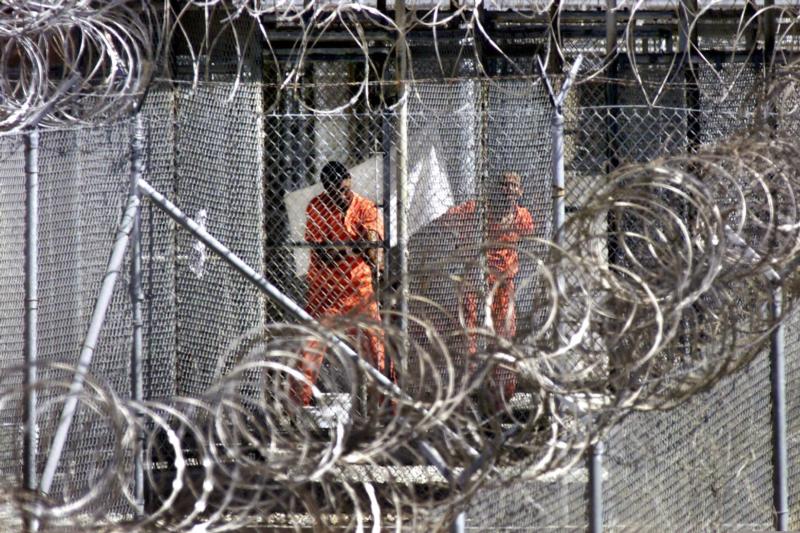 Alleged al-Qaida and Taliban combatants captured in Afghanistan are seen in the detention center at Guantanamo Bay, Cuba, in this Jan. 27, 2002 file photo. (CNS photo/AP Pool via EPA)

WASHINGTON (CNS) — As President Barack Obama offered a long-awaited plan to close the detention center at Guantanamo Bay, Cuba, organizations advocating for the closure welcomed the news and called for an end of the policy of holding remaining detainees without charges.

Keeping the detention center open and holding some detainees without charges for more than 14 years has been a “stain on our democracy,” said the Rev. Ron Stief, executive director of the National Religious Campaign Against Torture.

“Even now, this plan still parks many of them in a federal facility somewhere without really dealing with the fundamental issue of giving them a fair trial and fair hearing and sentencing them,” Rev. Stief told Catholic News Service Feb. 23.

Jerica Arents, an organizer with Witness Against Torture and an adjunct faculty member at DePaul University, said the president’s plan is much the same as the one he offered in 2009 after assuming office and that it offered no timeline to free the 91 detainees still being held.

Of those who continue to be held, 35 have been cleared for release and U.S. officials are preparing to send the men to host countries to resettle them.

“There is no substantial plan about the others who are left,” said Arents, whose organization includes members from faith-based communities, among them the Catholic Worker Movement.

In releasing his plan at the White House Feb. 23, Obama said keeping the center open runs contrary to American values, undermines U.S. status around the world and “is counterproductive to our fight against terrorists because they use it as propaganda in their efforts to recruit.” 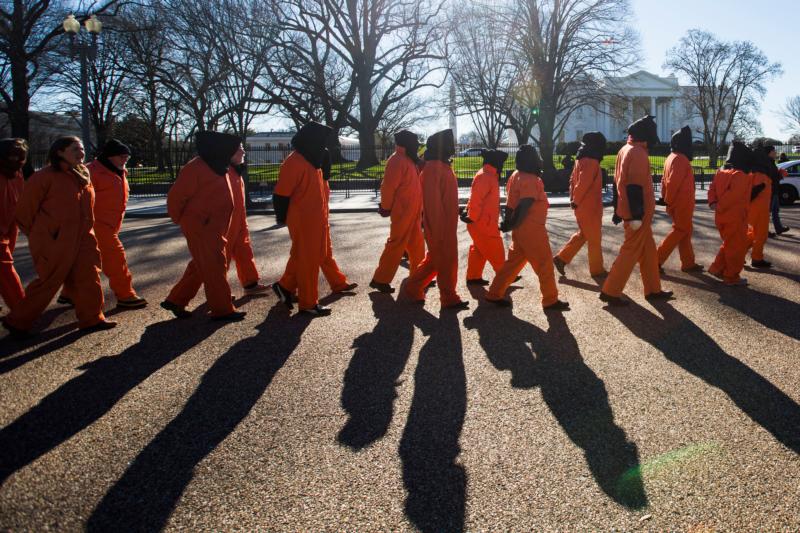 Activists dressed in orange jumpsuits representing detainees in the U.S.-run detention center at Guantanamo Bay, Cuba, rally in front of the White House Jan. 11 asking President Barack Obama to close the facility and release or charge the dozens of men being held there. (CNS photo/Jim Lo Scalzo, EPA)

The Pentagon-crafted blueprint calls for moving the detainees to an unnamed facility on U.S. soil. It said that measures to ensure that the men not yet cleared for release would remain under the strictest of security measures.

Review of the 56 remaining detainees will be accelerated under the plan to determine whether their continued detention is necessary, Obama said.

“I am totally committed to closing the detention facility at Guantanamo,” he said.

The announcement met with immediate pushback from Republicans in Congress.

Sen. John McCain, R-Arizona, chairman of the Senate Armed Services Committee, long an advocate for the center’s closure, decried the proposal as “a vague menu of options, not a credible plan for closing Guantanamo” and said it offered no “coherent policy to deal with future terrorist detainees.

Rep. Mac Thornberry, R-Texas, chairman of the House Armed Services Committee Committee, echoed McCain, saying the plan offered little in the way of specifics. “It is no substitute for the legally-required detainee plan the president must submit to Congress,” he said in a statement. “That plan is now overdue.”

Despite their concerns, both chairmen pledged to give the proposal a fair and thorough hearing in their respective committees.

A committee of the U.S. Conference of Catholic Bishops has long called for closing the detention center.

In a December 2014 letter, Bishop Oscar Cantu of Las Cruces, New Mexico, chairman of the bishops’ Committee on International Justice and Peace, reiterated the stance in a letter to Clifford M. Sloan, who at that time was special envoy for Guantanamo closure at the Department of State, “because it has become a symbol of violations of basic human rights as detainees have been abused and held in indefinite detention without trial.”

Bishop Cantu was in Rome and had no immediate comment on the Obama plan.

At its peak in 2003, Guantanamo held more than 670 detainees. When Obama took office, the number had fallen to 245 detainees.

NEXT: Little Sisters of the Poor are the public face of fight against HHS mandate