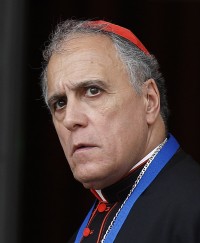 BALTIMORE (CNS) — As the book of the Gospels was enthroned in a prayer service to open the fifth annual Mid-Atlantic Congress Feb. 4 in Baltimore, a dozen women originally from Cameroon greeted the word of God with chanting and dancing.

Led by Emambu Beatrice Fomanka, members of the Catholic Women’s Association, dressed in colorful garb depicting Mary, used brooms to symbolically sweep up the congress attendees in the word. The association’s Immaculate Heart of Mary Branch is based at St. Gabriel Parish in Windsor Mill.

The prayer service framed the opening general session for this year’s Feb. 4-6 Mid-Atlantic Congress. The gathering serves pastoral and administrative leaders in the church at the parish and diocesan level, professional staff and volunteers.

Cardinal Daniel N. DiNardo of Galveston-Houston reflected on the words of St. Luke’s Gospel that had been proclaimed in song by Deacon Mark S. Loepker of Our Lady of the Fields Parish in Millersville. The cardinal noted that the Pharisees were complaining that Jesus ate and drank with sinners and tax collectors. Jesus responded to their “murmurings” with “the parable of searching for the lost” — the lost sheep and the lost coin.

“All the lost are actively sought out and brought home,” the cardinal said, noting that the passage helped set out his theme, “Becoming a Disciple.” He said “disciple” is an elementary and substantive word.

The cardinal noted that St. Ignatius, in his early third-century letter to the Ephesians, written while he was on his way to be eaten by lions for his belief in Christ, called himself a beginner as a disciple: “I am not giving you orders as though I was a person of importance. Even if I am a prisoner for the name of Christ, I am not yet made perfect in Jesus Christ. I am now beginning to be a disciple, and I speak to you as a fellow disciple. It is you who should be strengthening me by your faith, your encouragement and your serenity.”

Cardinal DiNardo noted the importance that Ignatius gave to strength, encouragement and serenity as characteristics of one becoming a disciple, while on his way to his own death.

The cardinal pointed out that of the 15 dioceses in Texas, the Archdiocese of Galveston-Houston has the dubious distinction of having more prisons within its boundaries. On one of his pastoral visits to a prison, he was to confirm seven non-Catholics who had been previously baptized in other churches and three Catholics who had never been confirmed, as well as one man who was to be baptized and confirmed and receive first Communion.

“Do you know what it must be like to step forward in a jail, in a big prison, and to declare, ‘I want to become Catholic’?”

He further recounted the story of Eric, who was receiving the three sacraments of initiation. After receiving Communion, he was off to the side, on his knees with his catechist, and he was sobbing, Cardinal DiNardo said. As a choir sang, “We are one body, one body in Christ, and we do not stand alone,” each of the others who received Communion passed by Eric and patted him on the shoulders.

“When you’re a disciple in the presence of the Eucharist, something happens to you. You’re transformed. … Body broken, blood poured out. He became a witness to that,” the cardinal said.

“That’s what the Eucharist does to someone who is becoming a disciple.”

More than 1,350 participants from more than 60 dioceses attended the 2016 Mid-Atlantic Congress, more than any other year. The reach extended beyond the Mid-Atlantic region, with participants from as far as Boise, Idaho; Santa Fe, New Mexico; and Miami. The annual conference is co-sponsored by the Association of Catholic Publishers and the Archdiocese of Baltimore, in partnership with the National Leadership Roundtable on Church Management.

The congress also included a half dozen boot camps and more than 70 workshops and breakout sessions, including a track in Spanish. Topics included everything from liturgy to music to youth ministry to staff development to how parishes can support hurting families.

A separate track for bishops and their senior staffs, sponsored by the Archdiocese of Baltimore and the Leadership Roundtable, was attended by about 40 people, including 16 bishops. The track provided workshops and small-group discussions for bishops and their key personnel to discuss leadership, management and planning.

Gunty is CEO and associate publisher/editor of the Catholic review, newspaper of the Archdiocese of Baltimore.

PREVIOUS: For Idaho chef, faith is a vital ingredient of life

NEXT: Scourge of human trafficking slowly moving out of the shadows