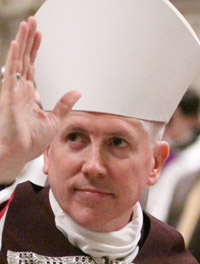 TOLEDO, Ohio (CNS) — The Toledo Diocese will cease publishing its newspaper, close its related website, end production of a weekly televised Mass and reduce spending at the diocesan pastoral center by 20 percent to plug a budget deficit.

“We must be committed to cease our practice of deficit spending,” Bishop Daniel E. Thomas said in a letter to parishioners Feb. 22. “These cost reductions will take us one step closer to reaching that goal and getting our financial house in order so that you can be assured that the diocese is stewarding your resources in a responsible and careful way.”

The cut in administrative spending comes as the diocese faces a “significant operating loss” at the pastoral center in downtown Toledo during the current fiscal year that ends June 30 and a projected $1.3 million budget shortfall for fiscal year 2017, which begins July 1, Bishop Thomas wrote.

The Catholic Chronicle, the diocesan newspaper that is published 11 times a year, was to close its doors Feb. 26, ending an 82-year history. The newspaper is projected to run up a deficit of nearly $300,000 this year and had been operating at a deficit for several years, the bishop explained.

The letter disclosed that current subscribers to the newspaper totaled fewer than 1,000 and that in many parishes stacks of newspapers went unread and were discarded. It said that the newspaper’s website had fewer than 27,000 page views during the last three months.

In contrast, the Toledo diocesan website had 168,000 page views over the same period, the bishop said.

“Our diocesan website together without our diocesan social media has already been for some time the primary medium for sharing news with the diocese,” Bishop Thomas wrote.

The newspaper’s staff of three full-time and two part-time employees were to be laid off. Editor Angela Kessler has been on the staff for 10 years. She declined to comment about the announcement.

The weekly televised Mass will end after the Easter Sunday broadcast March 27. The Mass had been broadcast for more than 30 years on WTOL-TV at an annual cost of nearly $100,000.

In explaining why the broadcast was ending, Bishop Thomas said Mass is available on other outlets via cable television systems that reach across a broader portion of the 19-county diocese in northwest Ohio.

He said about 7,500 people viewed the broadcast and that WTOL reached just 10 counties.

“As a pastoral response, we will develop a plan to assist our parishes in outreach to those who otherwise may not have access to Sunday Mass,” the bishop said.

The letter suggested that more steps were to be taken to address the budget challenges facing the diocese.

“As the father of this family of faith, it is my sacred duty to be a faithful steward of the household entrusted to me,” wrote Bishop Thomas, who was appointed to head the diocese in August 2014. “At the same time I am depending on your prayerful support, perseverance and generosity as we work transparently, responsibly and diligently toward the best interests of all members of the diocese. We do this not only for ourselves now but also for generations of Catholics to come.”

NEXT: Full day of confessions is opportunity for mercy, Minnesota priests say