Canadian nun tells of spiritual experience while captive in Cameroon 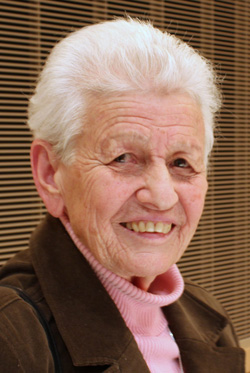 Notre Dame Sister Gilberte Bussiere, 76, pictured in a Jan. 11 photo, was kidnapped in April 2014 in northern Cameroon, where she had been a missionary since 1979. She was released after two months and now lives in Montreal. (CNS photo/Francois Gloutnay, Presence)

MONTREAL (CNS) — Notre Dame Sister Gilberte Bussiere, 76, was kidnapped in the middle of the night in April 2014, in Tchere, a small hamlet in northern Cameroon.

The Canadian nun said she was shivering with fear when she realized a man was entering her house through the window that night.

“I was wearing a nightdress. He grabbed my arm, pulled me out of my cabin and dragged me through the bushes, then tossed me into a car,” said Sister Bussiere.

“I ended up in the backseat of a car, with seven armed abductors. One of them constantly pointed a gun at me. They were laughing and humiliating me, making fun of the fact that I screamed furiously during my capture. They were very disrespectful, trying to lift my nightdress.”

Sister Bussiere, who had served as a missionary in Cameroon since 1979, returned to Canada after her June 1, 2014, release. During a public lecture delivered in Montreal in January, she disclosed some details about what she went through during her captivity.

She said the first two hours of her abduction were stressful. Then, she said, she “chose to let things go.”

“I must see things through the eyes of faith, confidence, abandonment and hope. It soothed me. I felt somehow serene during our 11-hour car ride through the backcountry,” she said.

Sister Bussiere tried to keep the same state of mind for the next 58 days.

“Our material deprivation was harsh. We had nothing, besides our clothes,” she said. “But I found out that when you’re deprived of everything, God looks after you and fulfills you with everything you may need.”

“I never felt so much God’s presence as I did during my captivity. I never enjoyed more deeply the soothing power of God’s words, as well as the joys of prayer,” said Sister Bussiere. “That feeling was so strong that it led me to believe that I wasn’t living in a state of absolute deprivation. Someone else was carrying that burden for me. That weight, that burden, Christ was living it for me and lifting it for me, from within myself. I thus felt an overwhelming peace of mind, an unexplainable freedom and serenity.”

She was kept with two kidnapped Italian priests, Fathers Gianantonio Allegri and Giampaolo Marta. They prayed together every day.

“In the morning, one of the priests suggested that we meditate on a few verses from the Gospel of Matthew. Since we had no Bible, we walked three or four miles, trying to remember each and every word of the text. We then came back and discussed about it for an hour and a half. We were amazed about what we could find out. We then tried to find some time to meditate and contemplate,” she said.

Sister Bussiere said she never felt any hatred toward her abductors. “Our guards … were between 14 and 25 years old. They were hungry and hopeless youngsters. They were there because they couldn’t even feed themselves. They couldn’t read and never went to school whatsoever. We couldn’t even talk with them, since they only spoke Haoussa, a Nigerian dialect.”

“When people are hungry, when they have no access to education or health care, they get angry. Some of them become extremists. No, there’s no way I can feel any hatred toward them.”

One morning, after the guards found a beehive, “they gave us a spoonful of honey.” Tea infusions made the petroleum-flavored water more palatable.

“We preciously saved our tea bags, drying them on the branch of a tree. But sooner or later, the tea ended up being tasteless. We then showed our empty tea box to the guards. At the end of the month, as soon as they received their pay, they bought some more tea and gave us seven tea bags. Can we honestly say that these men are our enemies?” asked Sister Bussiere.

She now talks of her experience as one “full of silence, prayer and reflection.”

“From a spiritual standpoint, it’s been a wonderful experience. Retrospectively, I almost tend to see it as a blessing,” she said.

No criminal or terrorist organization ever claimed responsibility for the kidnappings. However, many observers suggested that people linked to the Nigerian-based organization Boko Haram might be behind the abductions.

The religious congregation, as well as the governments of Canada and Italy, remained discreet about what led to the release of the three captives.

Gloutnay is a journalist with the Montreal-based Presence info.

NEXT: Gene editing of embryos may create designer babies in Britain