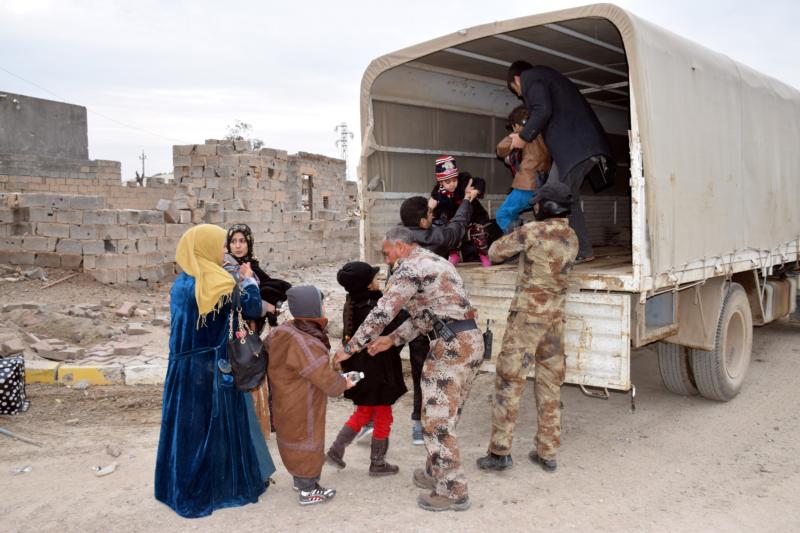 Iraqi soldiers evacuate families from Ramadi, Iraq, Feb. 3, after the city was recently recaptured by Iraqi forces. A European bishops' commission has welcomed a move by the European Parliament to classify atrocities and religious cleansing by the Islamic State as genocide. (CNS photo/Reuters)

MANCHESTER, England (CNS) — A European bishops’ commission has welcomed a move by the European Parliament to classify atrocities and religious cleansing by the Islamic State as genocide.

Father Patrick Daly, general secretary of COMECE, the Commission of the Bishops’ Conference of the European Community, said the designation represented progress in halting the persecution of Christians and other minorities in Syria and Iraq.

“Steps to prosecute criminals and bring them to justice are also imperative,” Father Daly said in a Feb. 4 statement.

The statement was issued the same day the European Parliament adopted the resolution proposed by Lars Adaktusson, a Swedish member, which stated that Islamic State was “committing genocide against Christians and Yezidis and other religious and ethnic minorities, who do not agree with the so-called ISIS/Daesh interpretation of Islam, and that this, therefore, entails action under the 1948 U.N. Convention on the Prevention and Punishment of the Crime of Genocide.”

The Parliament also recommended that “action should be taken” for the activities of Islamic State to be recognized as genocide by the U.N. Security Council.

The Parliament adopted the resolution the week after the Council of Europe, which harmonizes human rights legislation throughout the continent, voted 117-1 in favor of a resolution recognizing genocide.

If a similar resolution were adopted by the United Nations, signatories to the convention would have an obligation to bring the activities of Islamic State to an end, to prioritize the protection of the victims, and to prosecute perpetrators once the hostilities were over.

Since 2014 Islamic State, seeking to establish a caliphate, has persecuted anyone who does not share its extreme interpretation of Islam.

Terrorists have assassinated church leaders and driven hundreds of thousands of Christians from their homes in a campaign that has included mass murder, torture, kidnapping, sexual enslavement, systematic rape and forced conversions. Many Christian churches, monasteries, shrines and cemeteries have been destroyed.

Pope Francis, during a trip to Bolivia in July, used the word “genocide” to describe the plight of the persecuted Christians.

Campaigns are underway in the U.S. and Britain to persuade political leaders to designate Islamic State crimes as genocide.

Although President Barack Obama is yet to be persuaded, presidential candidates Hillary Clinton, Ted Cruz, Marco Rubio and Jeb Bush have each expressed the view that ISIS is committing genocide.

In Britain, the government has resisted calls to recognize genocide in spite of receiving a letter from 75 politicians asking it to do so. Among those who signed was Lord Guthrie of Craigiebank, the former head of the British armed forces, and Lord Evans of Weardale, the former head of MI5, Britain’s domestic spy service.

Lord Alton of Liverpool, a Catholic human rights campaigner, told the House of Lords in a Feb. 3 debate that failure of the government to acknowledge genocide would send out the message that it could sometimes be tolerated.

He said: “If no one is willing to name this for what it is or to take this forward, then the genocide convention becomes nothing more than window dressing and is an insult to the intention of the original drafters and ratifiers, as ‘never again’ inevitably repeats itself over and over again.”

Not all Catholics are convinced of the wisdom of classifying the crimes of Islamic State as genocide, however.

In December, Jesuit Father Thomas Reese, a member of the U.S. Commission on International Religious Freedom, argued it would be a mistake to give priority to the protection of Christians and other religious minorities when Islamic State was slaughtering and displacing moderate Muslims in even greater numbers.

NEXT: From gangs to God: Mexican youths hopeful for papal visit