French cardinal under fire for dealings with priest charged with abuse 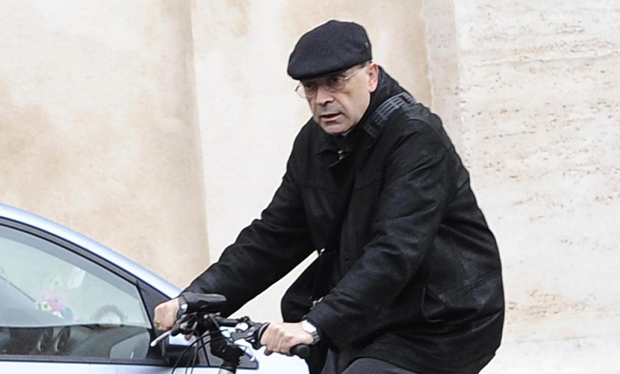 In this 2013 file photo, French Cardinal Philippe Barbarin of Lyon arrives by bicycle at the Vatican's synod hall. Cardinal Barbarin is facing questions about how he dealt with a priest who faces abuse and rape charges. (CNS photo/Maurizio Brambatti, EPA)

LYON, France (CNS) — French Cardinal Philippe Barbarin of Lyon is facing questions about how he dealt with a priest who faces abuse and rape charges.

On Jan. 27, proceedings opened against Father Bernard Preynat, charged with “sexual aggression and rape of minors” between 1986 and 1991 at Lyon’s Saint-Luc parish, where he ran a large Catholic Scout group over two decades.

French newspapers said the priest had been moved to a new parish in Neulise after his crimes were reported to Lyon Cardinal Albert Decourtray, who died in1994. Father Preynat was removed from parish work last August.

In a Feb. 14 statement, La Parole Liberee, an association set up to aid victims at Saint-Luc, said 45 victims of the priest had now come forward, adding that the group had filed charges against Cardinal Barbarin for failing to report abuse. Under France’s penal code, failure to report abuse carries a three-year jail term and a nearly $50,000 fine.

The group said it was also suing Cardinal Gerhard Muller and Archbishop Luis Ladaria Ferrer, respectively prefect and secretary of the Vatican’s Congregation for Doctrine of the Faith, for failing to act.

In a Jan. 12 statement, the Lyon Archdiocese said Cardinal Barbarin had launched an inquiry and consulted the Vatican after hearing a victim’s testimony for the first time in the summer of 2014.

However, in a Feb. 10 interview with France’s Catholic La Croix daily, Cardinal Barbarin admitted he had heard about Father Preynat’s activities “around 2007-2008,” but taken no action after the priest assured him he had committed no further offenses.

“The cardinal is in a difficult situation, since he wasn’t in office when these events occurred,” said Antoine Renard, president of the European Federation of Catholic Family Associations.

He told Catholic News Service Feb. 22 that the French church was cooperating with judicial authorities “in ways which weren’t so easy before. I think it’ll be enough if he visits those affected and addresses appropriate words to them.”

Renard said recent remarks by the pope had “weakened the cardinal’s position,” but added that few Catholics expected him to resign.

Speaking to journalists Feb. 17 on his flight back from Mexico, the pope described sexual abuse of a child by a priest as “a monstrosity,” adding that a bishop who transferred an accused priest to another parish was “a man without a conscience” whose best option was resignation.

In a Feb. 19 Vatican Radio interview, the papal spokesman, Jesuit Father Federico Lombardi, said Pope Francis had not been referring to Cardinal Barbarin, who had handled the Lyon case with “extreme responsibility.”

The Lyon archdiocese spokesman, Pierre Durieux, told CNS Feb. 22 that Cardinal Barbarin had agreed to cooperate with police and judicial investigators concerning the case, and would not be commenting further pending Father Preynat’s trial.

France’s Catholic bishops adopted guidelines for handling abuse accusations after Bishop Pierre Pican of Bayeux was given a three-month suspended jail sentence in September 2001 for failing to report abuse by a local priest.

The Vatican’s Pontifical Commission for Protection of Minors reiterated in mid-February that bishops had an obligation to “signal cases of sexual abuse to civil authorities.”

NEXT: Every Saturday, the Mercy Bus brings lapsed Catholics to confession